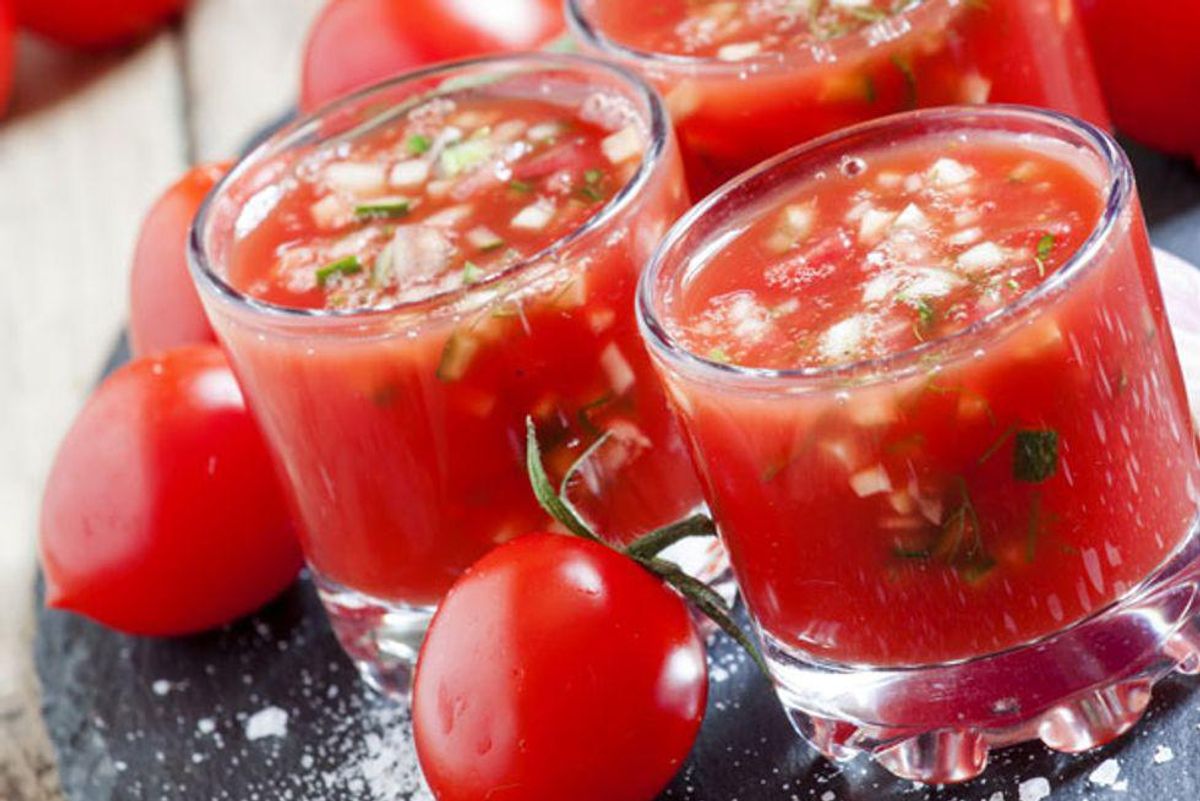 On a hot day, many cooks don't want to heat up the kitchen and prepare a hot meal. Chilled summer soups provide a super-refreshing and delicious alternative. Plus, they're a great way to use up the abundant garden produce that is often available in summer.

Gazpacho is the Spanish name for these cold soups, traditionally made from chopped raw vegetables, such as tomatoes, cucumbers, peppers and onions. Gazpacho originated in the Adalusian region in the south of Spain and was a bit spicy. It's now spread far beyond those borders, and variations can be tangy, slightly sweet or a blend of contrasting flavors.

Thickness and texture also may vary, with some being so smooth you can drink them from a cup and others having more chunks of vegetables or fruit.

Similarly, the soup base varies. The original recipes were often very simple—a puree of tomatoes, peppers, cucumber, garlic, olive oil, wine vinegar and bread, accompanied by garnishes and croutons, if desired. Nowadays, the base may be made from tomato juice, broth, water or even watermelon.

One guiding principle remains: "The secret lies in the harmonious merging of the ingredients with no one element dominating the others," writes cookbook author Claudia Roden in Mediterranean Cookery.

Traditionally, gazpacho was eaten between courses to accompany a main dish or sometimes as a meal in itself, Roden says. Either way, it's a treat. You can serve a bowl of chilled soup for a delightful summer luncheon or serve a small cup as an appetizer or small course during dinner. Or make it the main meal with a loaf of crusty bread and some good Spanish cheese and olives alongside.

This Gazpacho uses a chicken or vegetable broth as the base, rather than tomato juice, which gives it a thicker texture and stronger tomato taste.

Ajo Blanco (white garlic) is a garlic, grape and almond soup that originated in Spain but is very different from the traditional vegetable gazpacho. This white chilled soup goes well as a first course with seafood or grilled meats.

For a surprisingly different twist, try these two newer fruit-based chilled soups. Watermelon Gazpacho adds some spicy and savory ingredients to the sweet melon for a surprisingly delicious soup that is neither too sweet nor too spicy.

And for mango lovers, Mango Cucumber Soup makes a quick and easy chilled summer soup that's hard to beat. Greek yogurt gives it a creamy texture. It won't heat up your kitchen and will delight your taste buds for lunch or dinner.