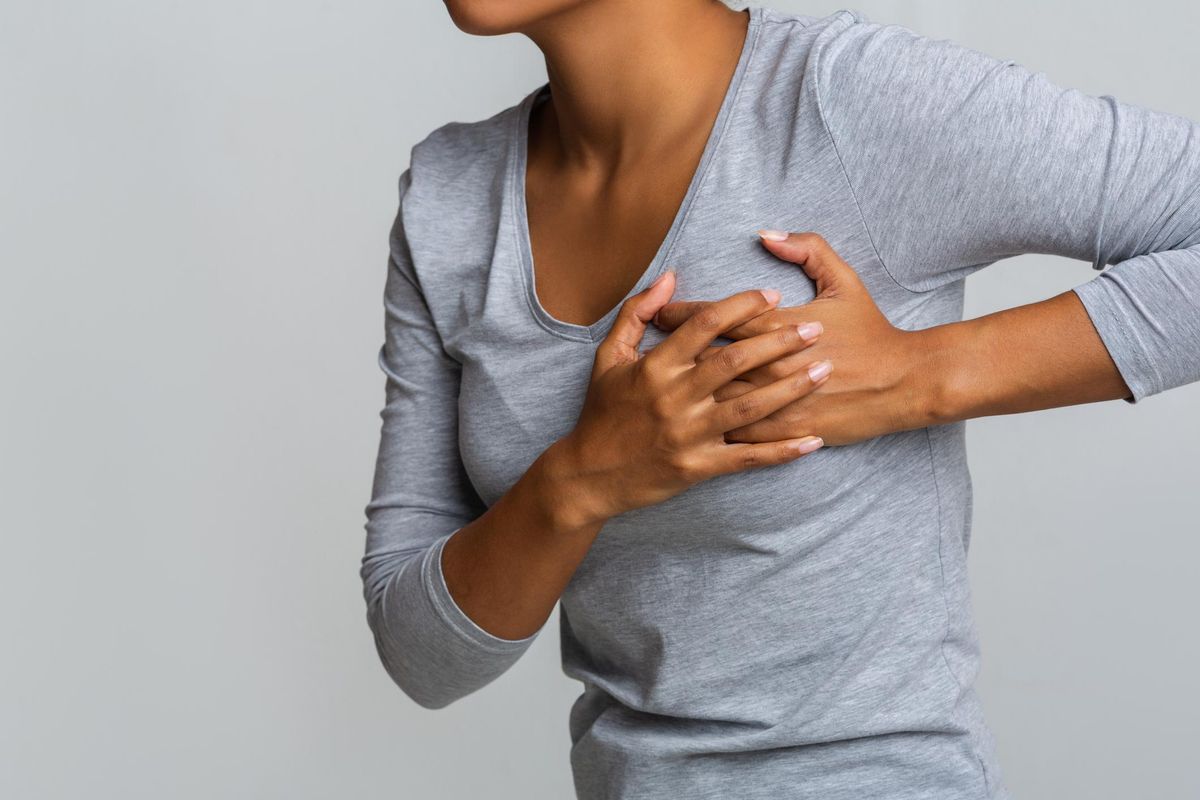 From nothing to something, random pain in your left breast can mean several things. Learn about four of the most common causes.

Have you ever felt quick, stabbing pain in your left breast? A pain that comes on fast, but leaves just as quickly? You're not alone, so we decided to scope out the possible reasons why.

Here are four possible causes of this mysterious pain.

Pleurisy is a condition that causes sharp, stabbing pain under your breast that can be made worse by breathing in deeply. Pleurisy is caused by inflammation of the thin membranes that surround the outside of your lungs and the inside of your chest cavity, called pleura. When these membranes become inflamed (usually because of a viral or bacterial infection), they can rub against each other, which is what causes the sharp pain you feel. Pleurisy itself is not usually serious and typically goes away on its own, but it can be symptomatic of other more serious conditions and diseases, so it should be discussed with your healthcare provider (HCP).

Precordial catch syndrome causes intense, sharp, knife-like pain under the left breast area, often right under the left nipple. Like pleurisy, it can also be made worse by breathing, and you may find yourself taking very shallow breaths in order to avoid making the pain worse. While the pain itself is intense, precordial catch syndrome is harmless and its exact causes aren't known. It's not related to your heart and lungs and goes away on its own with time. This condition is mainly found among children, teens and young adults, but can also be found in older adults as well. While it can be painful, precordial catch syndrome is nothing to worry about.

Pericarditis is the result of inflammation of the pericardium, which is basically a sac that surrounds your heart in order to keep it in place and help it function. When the pericardium membranes become inflamed, it can lead to chest pain, specifically under the left breast. It may feel like a stabbing pain in your heart or under your breast bone. While it is most often found in people assigned male at birth, it can also be found in people assigned female at birth. Its exact cause isn't often known, but it may be the result of a viral infection. Pericarditis is usually harmless and resolves itself with time, but in rare cases can cause serious complications and can become chronic.

Costochondritis is another form of inflammation, this time of the cartilage where the ribs go into the sternum. It's actually a musculoskeletal pain that doesn't come from the breast at all, but because of its location, the pain can seem like it's coming from your breast. Like most of these other conditions, it usually goes away on its own but it can last several weeks or more. The pain can be treated with medicine or physical therapy, but if you suspect you have this condition, you should definitely talk to your HCP to find out for sure, and they can determine the best course of treatment for you.

Because of the way your body is put together and where your internal organs are, the left side of your body is often affected more than the right by some of these conditions. While a fleeting pain in your left breast is usually nothing to worry about, rarely it can point to something serious. That's why it's always a good idea to talk to your HCP to rule out any health conditions that might need to be treated.

After a Breast Cancer Diagnosis, Strap In for a Roller-Coaster Ride of Emotions

Breast Cancer Is the Leading Cause of Cancer Death in Latina Women: The Healthcare System Could Change That