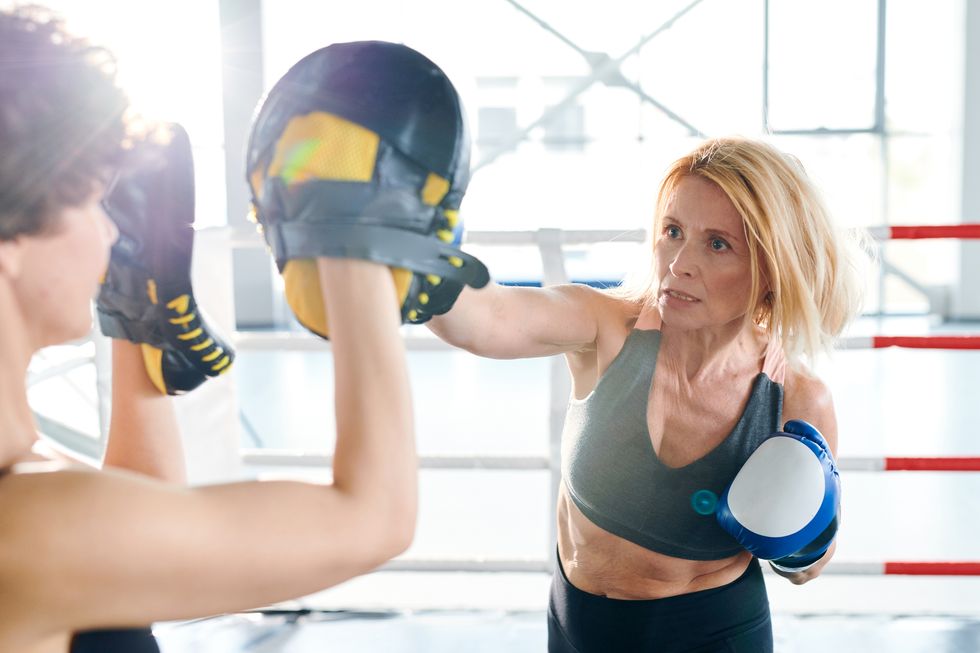 Serious sweat sessions at the gym have longterm health benefits, including lowering your risk of dying from heart disease, cancer or other causes, a new study found.

Serious sweat sessions at the gym have long-term health benefits, including lowering your risk of dying from heart disease, cancer or other causes, a new study found.

The study included more than 4,700 middle-aged and older women who were referred for treadmill exercise echocardiography because they had known or suspected coronary artery disease.

The women walked or ran on a treadmill that gradual increased in intensity, and continued until they were exhausted. During a median follow-up of 4.6 years, there were 345 heart-related deaths, 164 cancer deaths and 203 deaths from other causes. The annual rate of death from heart disease was nearly four times higher in women with poor exercise capacity than in those with good exercise capacity.

Study Links Daily Marijuana Use to Adverse Fetal Health Outcomes
Daily marijuana use during pregnancy may lead to an increased risk of low birth weight, low resistance to infection, decreased oxygen levels and other negative fetal health outcomes, according to a new study in Journal of Maternal-Fetal and Neonatal Medicine. Physicians reviewed sonogram data from nearly 450 pregnant women who self-reported daily marijuana use. They found that daily cannabis use is associated with delayed fetal growth, which can put a baby at risk of certain health problems during pregnancy, delivery and even after birth. Those problems include issues like low birth weight, hypoglycemia and low Apgar scores. In the most severe cases, delayed growth can lead to stillbirth.

Mammograms May Be Able to Show Who is at Risk of Heart Failure
Mammograms don't only detect potential cancerous tumors. They also show the formation of breast arterial calcifications, which are calcium buildups inside the arteries in the breast. This is the finding of recent research by researchers from the University of California, San Diego who presented their findings at this year's American Heart Association's Scientific Sessions. Researchers argue that breast arterial calcifications can help identify women who may be at risk of cardiovascular problems, including heart attack, stroke and heart failure, in which the heart is unable to pump blood effectively. In particular, investigators feel that mammograms could help doctors detect not just cancer but also the risk of heart disease. They say these tests could do so by highlighting the presence of calcium buildups in breast arteries. Find out the truth behind 3D mammogram costs.

Distracted by Their Smartphones, Pedestrians Are Landing in the ER
New research in JAMA Otolaryngology--Head and Neck Surgery suggests that pedestrians should beware of using their smartphone while they walk. According to one database, more than 2,500 men and women went to an emergency room for head and neck injuries sustained while using a smartphone between 1998 and 2017. When that includes the whole country, the total is likely to be more than 76,000 people. This study only looked at head and neck injuries from one database. The most common injuries were to the head, face, including eyelid, eye area and nose, and neck. Cuts and scrapes were the most common complaint, but about 18 percent of patients suffered internal organ injury.

Mom-to-Be's Diabetes May Raise Odds of Heart Disease in Her Kids
Children whose mothers had diabetes before or during pregnancy have an increased risk of developing heart disease by age 40, according to a new study. For the study, researchers analyzed data from 2.4 million children who were born in Denmark from 1977 to 2016, and followed for up to 40 years. Those whose mothers had diabetes before or during pregnancy had a 29 percent higher risk of early-onset heart disease than those whose mothers didn't have diabetes, with rates of about 18 percent and 13 percent, respectively. The study also found that children of mothers with diabetes had higher rates of specific types of heart disease, particularly heart failure, hypertensive disease, deep vein thrombosis and pulmonary embolism.

Dirty Makeup Sponges Harbor Bacteria
New evidence shows that many makeup products and beauty tools that have passed their expiration date—particularly makeup sponges—that people don't periodically clean, harbor potentially harmful bacteria, such as Staphylococcus aureus and Escherichia coli. Applying makeup in bathrooms, public toilets, and on car, train, and plane journeys gives makeup products and beauty tools opportunities to gather potentially harmful bacteria. All makeup products have a “shelf life," which is the period during which they're typically safe to use. Improper use of makeup—such as rubbing eyeshadow with unclean fingers—can affect it, too.

Domestic Abuse Can Leave Legacy of Poor Health
Women with a history of domestic abuse are more likely to develop chronic conditions that cause pain and fatigue, a new study says. British researchers examined medical records of more than 18,500 women who had suffered domestic abuse between 1995 and 2017 and more than 74,000 who had not been abused, to compare rates of fibromyalgia and chronic fatigue syndrome (CFS). Fibromyalgia causes widespread body pain, while CFS causes extreme tiredness. The survivors of domestic abuse were twice as likely to have fibromyalgia and CFS than others, according to the study in the Journal of Interpersonal Violence.

Childbirth May Be More Dangerous in Rural Areas
If you're pregnant and live in a rural area of the United States, new research in Health Affairs shows that you're at higher risk of life-threatening complications or death during or after childbirth. The study analyzed 6.8 million births nationwide between 2007 and 2015. They found that deliveries requiring emergency lifesaving treatment and mothers' deaths rose from 109 to 152 per 10,000 childbirth hospitalizations during that time.