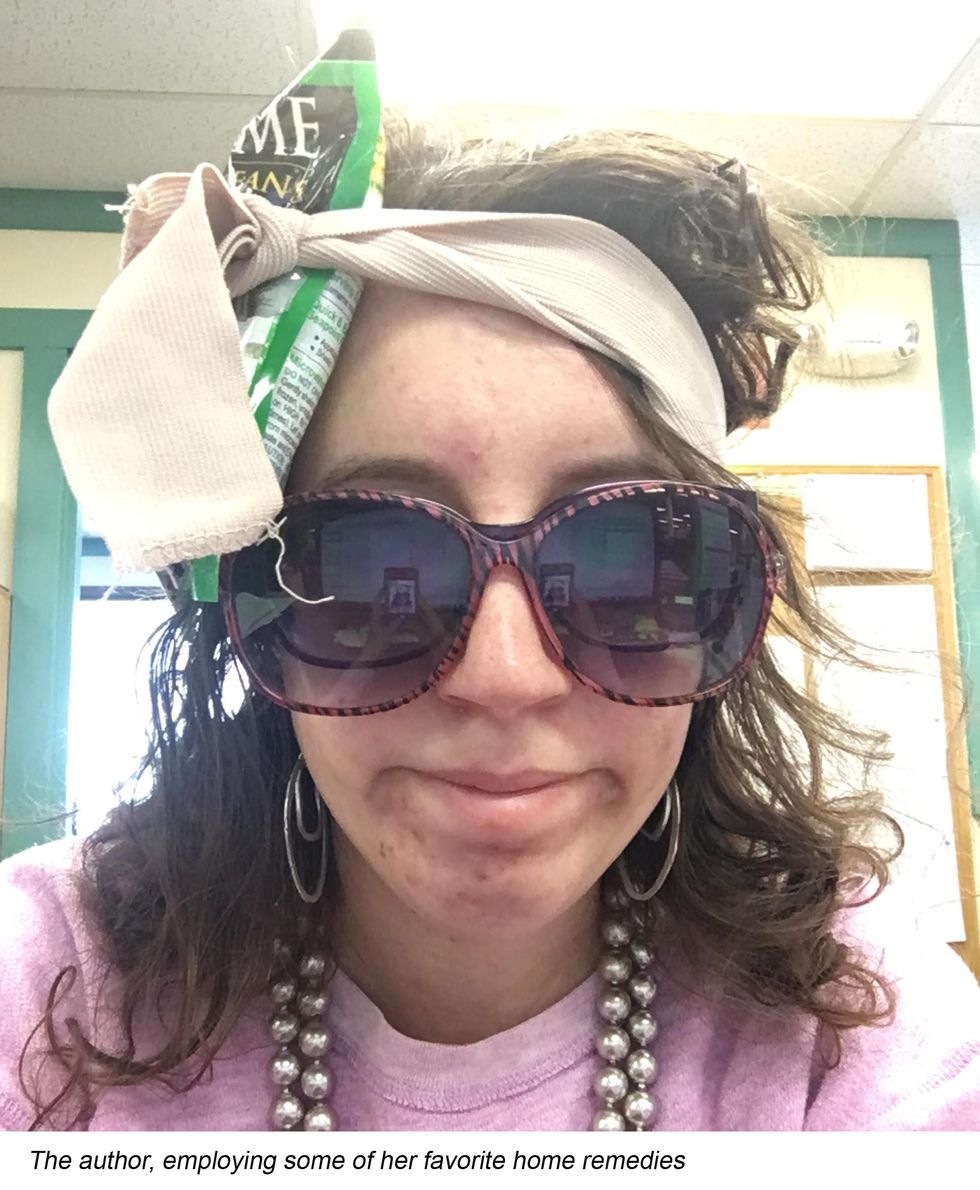 Dealing With Migraines Is More Art Than Science

This is one woman’s journey coping with chronic migraine headaches.

The pounding starts in my right temple and for a moment, I let denial set in. The brain fog, the nausea, and the dots appearing in front of my eyes can all be attributed to a poor night's sleep.

I want this to be true, but know it isn't. The work I need to get done will have to wait. I have a migraine.

I cannot recall a time in my life when I haven't felt this pain.

I first became aware of headaches when I was around eight years old. They would come late at night as I neared sleep, a combination of discomfort and shallow pain that would make for a restless night.

By the time I was 12, my mother started introducing me to ways to handle what she was now quite certain were migraines. She too had been in a bit of denial: All the women on her side of the family have been afflicted with migraines for generations, but she had hoped that my father's side of the family would spare me. This wasn't to be the case.

And so I was introduced to the art of caring for migraines. I say art because managing migraine pain is subjective, requiring a delicate balance. A medication that works one day for one migraine may not work the next week for the next migraine. A hot shower might provide comfort for five minutes before the steam increases the pain tenfold.

My mother did try to advocate on my behalf with various doctors, although based on her experience seeing health care providers for her own migraines, she didn't have much faith. Migraines have long been viewed as a "women's issue" and dismissed because of that stereotype. They've been considered a side effect of women "getting overwhelmed" and their menstrual cycles making them "emotional." While opinion has shifted, migraines still carry this history.

So we used home remedies in our family. Trial and error with over-the-counter medication. Cold washcloths across my eyes and ice packs pressed to my temples. Total darkness and silence. Avoidance of cleaning products and strong smells while I was unwell. Cheerios, Gatorade and ginger ale were often the only "nutrition" my stomach would accept.

As I got deeper into my teens, over-the-counter medications lost their effectiveness. It was not uncommon for me to miss a day of school due to migraine pain. When I was 16, an appointment with a child neurologist resulted in nearly a year of memory issues caused by a too-powerful daily drug. Another painkiller provided the only relief that worked, although the side effects rattled my stomach and sometimes my heart.

A few years later, a new neurologist prescribed a better regime, but like clockwork, when a cold front moved in, I'd feel pressure building in my head before it would explode, making me abandon all pretense of getting anything done. Sudden changes in barometric pressure and humidity levels were a sure sign that an attack was coming. Sometimes I'd battle a migraine on and off for more than a week. To cope, I'd imagine taking a syringe to the places on my head where the pain was concentrated and emptying my brain of the offending blood vessels that pounded against my skull.

It's hard to quantify the number of work and life events that have been impacted by my migraines over the years. In the freezer at work now, I have a package of frozen edamame. I keep an ace bandage in my desk and a pair of sunglasses in my purse. Putting the three together, I have something to carry me through as the medication decides whether or not to take effect. When I come down with an attack, various supervisors have suggested I go home for the day, but I almost always decline. The old joke: If I went home every time I had migraine pain, I'd never be at work.

But there have been other times I've skipped out on social events, or eaten oatmeal for dinner to settle my stomach because weather reports showed an oncoming cold front, and I knew the pressure I felt building all day would soon turn into pain. It's taken me years to feel comfortable hiking because of the persistent anxiety about being stuck on a mountain in intense pain, unable to get back down.

Even pain-free days aren't truly free. I am always planning and prepping for when the next attack will come. I overcompensate on days when I feel okay because I know there's a very good chance that tomorrow, I won't.

In recent years, a new class of drugs has made my migraines more manageable, but when I feel that familiar pounding at my temples, I know to listen. My migraines are here to stay.

Liz Sauchelli is an editor and reporter for a daily newspaper in Northern New England, where she has worked since graduating from the State University of New York at Oswego. She lives in rural New Hampshire near her favorite mountain with her boyfriend and two cats.

Can Migraine Attacks Be Triggered?