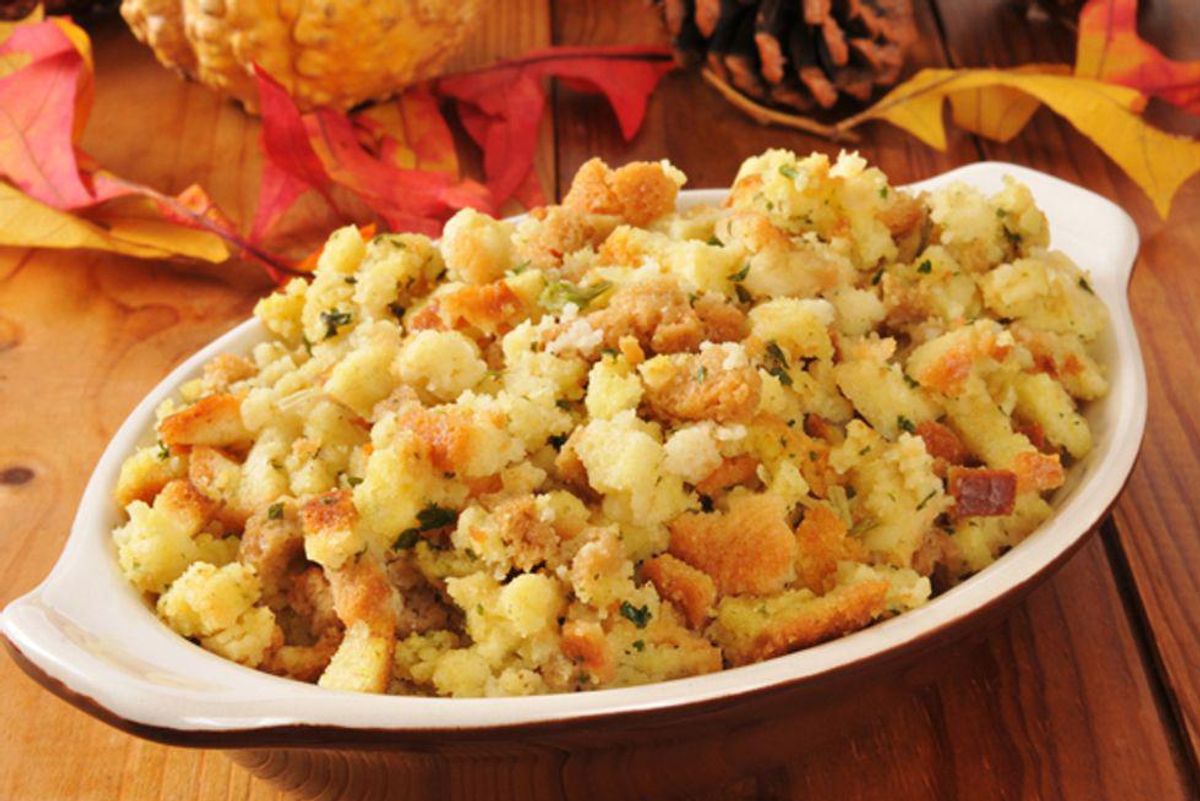 Thanksgiving Stuffing Recipes to Be Thankful For

Some people anticipate the stuffing more than the turkey on Thanksgiving. They salivate over the side dish's moist and flavorful deliciousness, gobbling up multiple helpings on the big day.

On the other hand, some could do without it, thinking it's dry, blah and basic. Stuffing, like any dish, can of course be made in a way that's boring and bland. But it doesn't have to be that way. Try creative mix-ins like pears, apples, sausage, mushrooms, pecans, walnuts, bacon, raisins or your favorite spice combinations. Or think beyond bread by jazzing up the stuffing's base with rice, seafood or barley. When prepared to your liking, you may soon develop a fondness for turkey's sidekick.

Here are a few standout stuffing recipes that we promise will make you thankful that you tried the stuffing this year:

1. Classic Sage and Onion Dressing (Stuffing)
For this recipe, start with toasted bread. You don't have to leave it out overnight to get it dry and toasty. Instead, bake it until it's crispy and brown. Assemble this recipe the night before the big day, leaving it unbaked in the refrigerator. Then throw it in the oven once the turkey is done and you'll have a stuffing that's moist on the inside.

2. Traditional Bread Stuffing
You may think that this recipe doesn't contain enough liquid for the dried bread. But you'll see that it's moist, not dry, once you bake it. The author adds that you can assemble this stuffing the day before Thanksgiving.

3. Mom's Stuffing, Lightened Up
To double this recipe, make one batch in a casserole dish and stuff the turkey with the other. So that the bread hardens, cut it and let it sit out overnight. Short on time? Put bread in the oven at 250 F for 30 minutes. Stir halfway until bread is completely firm.

4. Homemade Southern Cornbread Dressing (Stuffing), Soul Food Style
Add more seasonings if you want a darker stuffing. The blogger says she prefers using a teaspoon of each seasoning, especially if the stuffing is being served with flavorful gravy. She also suggests using cornbread that's a few days old since it's not as moist.

5. The Best Thanksgiving Stuffing
The blogger swears this stuffing could be her whole Thanksgiving meal. You can infuse your own chicken broth with the herbs. Or make it easier on yourself by swapping your favorite store-bought chicken broth for your favorite store-bought Tuscan chicken flavor-infused broth. You'll get the flavor of basic stock plus other seasonings.

6. Challah Wild Mushroom and Herb Stuffing
A few tips: Use any kind of bread you want. If you're using fresh herbs, buy the poultry blend, which will have everything you need. To curb prep time, buy pre-sliced mushrooms. For a crispier stuffing, divide the mixture into two baking dishes. For a moister stuffing, bake the whole mixture in a 9-by-13 baking dish.

7. Artichoke Stuffing
Here, you'll find a bare-bones, budget-friendly stuffing. The possibilities are endless for add-ins like sweet Italian sausage, bacon, golden raisins or mushrooms. Just be aware that additional ingredients will hike your cost per serving.

8. Herbed Bread Stuffing
The blogger says she ate stuffing-from-the-box for years. She promises this recipe is simple and flavorful enough that you won't return to boxed stuffing. You'll be able to taste all the ingredients in each bite.

10. Chestnut Stuffing With Leeks & Apples
Bottled roasted chestnuts, usually found in specialty grocery stores, can be expensive. Save money by roasting your own, though be forewarned that the process can be time-consuming.

11. Bread Stuffing With Seasonal Fruits and Herbs
Have an herb garden? Use your fresh herbs in this stuffing before they're destroyed by frost. And fresh apples add the sweetness to this dish.

12. Seafood Stuffing
Can't give up the boxed stuff? Spice up the instant variety with shrimp and crab to create this seafood stuffing. It will give you a different take on stuffing, minus the labor and effort.

Have a Heart-Healthy, Diabetes-Friendly Valentine's