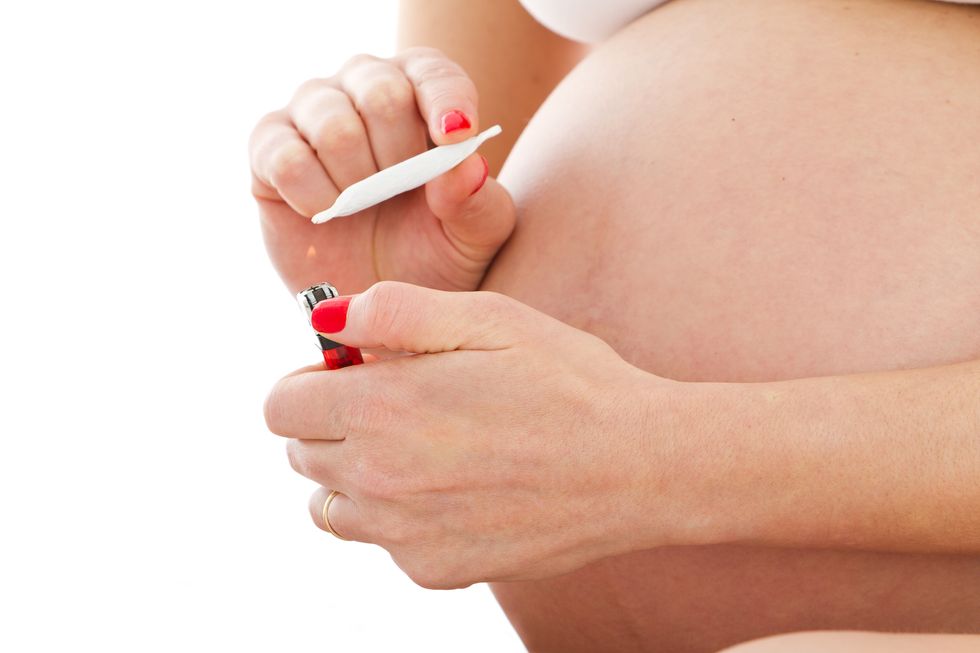 Women who are pregnant of breastfeeding their infants should avoid marijuana since THC (one of the active compounds in marijuana) can easily cross the placenta and accumulate in the brain and fat of the fetus, and this can harm the fetus or their baby.

More and more people consider smoking marijuana harmless or even beneficial, but mounting research suggests women who are pregnant or breastfeeding should avoid it altogether.

That's according to new recommendations from the American Academy of Pediatrics, which cites growing evidence of marijuana's potential harm to children's long-term development.

The strong direction to women and pediatricians comes as more than half of states, including California, have legalized marijuana for medical or recreational use, and studies show that a growing number of babies are being exposed to the drug.

The march toward marijuana legalization has outpaced scientific research about its effects. Because marijuana is a Schedule 1 drug — by definition, one with potential for abuse and no approved medical use — federal law has limited research on it. But in a detailed review of the existing safety data published Monday in the journal Pediatrics, researchers concluded that enough concerns exist about both short-term growth and long-term neurological consequences for children to recommend against it.

"Women should definitely be counseled that it's not a good idea to use marijuana while pregnant. If you're breastfeeding, we would encourage you to cut back or quit," said Seth Ammerman, a co-author of the report and professor of pediatrics at Stanford.

If a breastfeeding mother does not stop using, however, "the benefits of breastfeeding would outweigh the potential exposure to the infant," he added.

A second study, also published in Pediatrics, found that THC, the molecule that gives marijuana most of its psychoactive effects, accumulates in breast milk, even up to six days after the mother's last use.

The findings come as marijuana use among pregnant women is rising. From 2002 to 2014, self-reported use of marijuana in the past month increased by 62 percent to 3.85 percent. Since then, a growing number of states have legalized marijuana for recreational use, so this is likely an underestimate of current rates. In studies of urban, young and socioeconomically disadvantaged pregnant women, 15 to 28 percent of women reported using the drug.

California legalized use of recreational marijuana among adults 21 and older beginning in January.

Unlike for alcohol and cigarettes, even legally sold marijuana does not carry a safety warning for pregnant women.

"There's a myth out there that it's benign. And for many adults who are sporadic users, that's probably true. But in these circumstances it may be harmful," said Ammerman.

Of particular concern, he added, is that the potency of THC in marijuana has more than quadrupled since 1983. Several of the largest studies were conducted when potency was much lower, according to the report.

Research has found that THC can easily cross the placenta and accumulate in the brain and fat of the growing fetus. Studies, while limited, suggest that prenatal exposure to marijuana could cause harm to children's executive functioning, including concentration, attention, impulse control and problem-solving.

Nonetheless, mothers groups online are filled with women touting the benefits of marijuana during pregnancy, citing the drug as a remedy for the nausea of morning sickness.

"A lot of women may be getting the info from online media and from marijuana dispensaries. As health professionals, we need to educate women that there are a lot of concerns both for the fetus and for later development," said Kelly Young-Wolff, a research scientist at the Kaiser Permanente Northern California Division of Research, who was not involved in the Pediatrics studies. (Kaiser Health News is not affiliated with Kaiser Permanente.)

A recent study in the journal Obstetrics and Gynecology, for example, found that 70 percent of cannabis dispensaries in Colorado recommended marijuana to treat morning sickness during the first trimester. No evidence suggests that marijuana use is safe or indicated for morning sickness, said Young-Wolff, though there are plenty of other options that a health professional can recommend. And the worst nausea happens in the first trimester, when the developing fetus might be the most vulnerable to substances like marijuana.

But convincing women of the dangers of cannabis use during pregnancy can be challenging. "A lot of the public equates legalization with some kind of endorsement of safety. Of course, that's not true," said Dana Gossett, a professor of obstetrics and gynecology at the University of California-San Francisco.

When she counsels patients to avoid marijuana, Gossett said, she runs into a "fair amount of indifference."

Pregnancy is often a time when women are receptive to changing their habits to protect their growing baby. But while they generally accept that smoking cigarettes is bad — that's been clear since the 1960s — they often view marijuana as safe and natural, and therefore harmless.

"Just because something is plant-based or natural doesn't make it safe." Arsenic, added Gossett, is also a natural substance.

So far, the news of the dangers of marijuana during pregnancy and breastfeeding does not appear to be reaching its target audience.

On Facebook, the group "Stoner Moms" has more than 22,000 followers. And the Glow Nurture pregnancy app has several community groups devoted to users, including "420 Friendly," "Ganja Mommies," "CannaMoms" and "Stoners."

The chats are filled with women asking not whether marijuana could be harmful, but rather whether smoking marijuana could put them at risk of involvement from Child Protective Services.

"I live in Georgia. … I'm only 5 weeks but I plan to keep smoking since there's no evidence of it being harmful. Has anyone given birth here without being tested?" asked one user on the "Moms for Marijuana" group on the popular BabyCenter app.

A user in Wisconsin wrote: "Did you have any issues with being tested at delivery or having CPS getting involved while on Medicaid? Thanks in advance!!"

"I wonder if moms that smoke cigarettes have to go through the same worries that moms that smoke weed do?" asked a third poster in North Carolina. "I stopped smoking at 24 weeks and it just sucks that we have to live in fear of our babies being taken away! Even though there's no evidence of weed being harmful!"

Screening rules vary by hospital, but 24 states and the District of Columbia require health care professionals to report suspected prenatal drug use, according to the Guttmacher Institute. In many states, drug use can be used as evidence of child neglect or abuse in a civil case.

According to Young-Wolff, although pregnant and breastfeeding women should certainly be educated about the risks of marijuana, "none of this research should be used to penalize or stigmatize women."