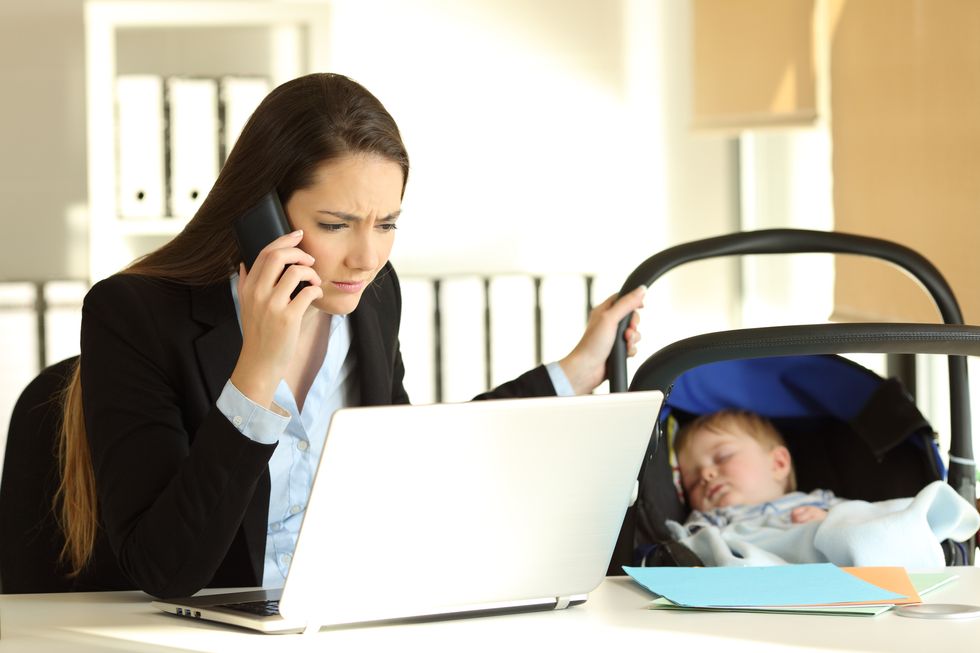 Many women with newborns face challenging workplace rules or physical problems – from limited leave policies or lack of lactation rooms – and the U.S. Congress has its own set of challenges for new moms who are Members of Congress or Congressional staff.

It is so common that it likely will have happened at least once somewhere in the United States by the time you finish reading this sentence. But it took more than 230 years for it to happen to a senator.

On Monday, Tammy Duckworth became the first sitting senator to give birth, forcing Senate leaders to face how ill prepared they may be to accommodate the needs of a new mother.

Duckworth, 50, an Illinois Democrat, and her husband, Bryan Bowlsbey, announced she had given birth to a daughter, Maile (pronounced MY-lee) Pearl. Their first child, Abigail, was born in 2014, while Duckworth was serving in the House of Representatives.

"As tough as juggling the demands of motherhood and being a Senator can be, I'm hardly alone or unique as a working parent," Duckworth said in a statement, "and my children only make me more committed to doing my job and standing up for hardworking families everywhere."

Duckworth has made no secret of her bewilderment at the attention she has received since announcing her pregnancy in January. She seized the opportunity to call for adjusting Senate rules to accommodate new parents.

They are changes that could help make a pregnant senator less remarkable in the future, especially as record numbers of women set out to run for office — many of them Democrats spurred by the Donald Trump presidency and Republican-controlled Congress, but also many motivated by the #MeToo movement to fight sexual harassment and assault. A recent Associated Press survey found that 309 Democratic and Republican women so far had filed paperwork to run for the House, a new high.

Duckworth has said the most problematic rules generally prevent anyone who isn't a senator, a designated aide or other official from being on the Senate floor. Because a senator must be on the floor in order to vote, she argued she should be allowed to bring her young child with her.

"For me to find out that there are issues with the United States Senate's rules where I may not be able to vote or bring my child onto the floor of the Senate when I need to vote because we ban children from the floor, I thought, 'Wow, I feel like I'm living in the 19th century instead of the 21st,'" she told CNN last month.

The Senate has bent its rules before to make accommodations for senators. Unsurprising for an institution where the average age in January 2017 was 61.8 years, those examples tend to favor senators battling serious illnesses. Exceptions have also been made for members with limited mobility. In 1997, for instance, some steps on the Senate floor were replaced with a ramp to assist newly elected Sen. Max Cleland (D-Ga.), a disabled veteran who used a wheelchair.

Bill Dauster, who advised Democrats on Senate procedure for decades before retiring last year, said senators might ask their colleagues for permission, with unanimous approval, to bring aides onto the floor. For instance, some senators have brought people to push their wheelchairs. Duckworth may be able to follow that example with her newborn, he said.

"I think it would be wonderful theater if she went to the floor, asked consent that I be allowed to bring my infant child to the floor for brief periods of time for the rest of the session of Congress," Dauster said, "and see who objects."

Like the United States, Congress has no blanket policy on parental leave, allowing senators and representatives to set their own office policy. Duckworth offers her staff 12 weeks of parental leave and plans to take an equivalent amount of time. She will keep in contact with her office and return for close votes, said Sean Savett, her spokesman.

The lingering stigma among some voters against female lawmakers with young children can make it hard to take extended leave, though several candidates have been tackling that head-on. At least two women running for office this year have footage of themselves breastfeeding in their campaign ads.

Those difficulties, along with the demands of motherhood that persist even today, mean many women have postponed or ruled out a career in politics.

"We're asking women, in some senses, to take on a third part-time job," said Debbie Walsh, director of the Center for American Women and Politics at Rutgers University in New Jersey. "And so what we've seen, still, is women are more likely to wait until they're a bit older to start in politics, which has implications for where they end up in politics."

Walsh pointed out that when mothers do run, they carry their unique perspective with them to Congress. After having her first daughter, Duckworth introduced legislation that would ensure safe, clean and convenient lactation rooms in large- and medium-sized airports. Former Sen. Blanche Lincoln (D-Ark.), the mother of twins who at 38 became the youngest woman elected to the Senate and later the first woman to chair the Senate agriculture committee, championed nutritional school lunches in the late 1990s.

While she is the first in the Senate, Duckworth is among 10 women who have given birth while serving in Congress, five of whom are currently in office. (Betty Koed, the Senate historian, said her office does not keep detailed records of senators' children, though at least two former senators adopted kids while in office: Mary Landrieu (D-La.) and Kay Bailey Hutchison (R-Texas).

Change has been slow — and primarily female-driven. The Office of the Attending Physician opened Capitol Hill's first designated lactation room in 2006. After Rep. Nancy Pelosi (D-Calif.) became the first female House speaker in 2007, she opened more lactation rooms — enabling staffers and members to better adhere to the American Academy of Pediatrics' recommendation that children be breastfed for at least the first year of life.

She is also no stranger to the challenges facing a new mother in Congress. In 2014, pregnant with her first child and under a doctor's orders not to travel, Duckworth petitioned House Democratic leaders to allow her to vote by proxy in a round of internal party elections. They refused, citing the problems it could cause when members request absences for other reasons.

While bare shoulders may be unwelcome in the House, children are not. Rep. Cathy McMorris Rodgers (R-Wash.) brought along her then-7-year-old son, who has Down syndrome, as the House passed legislation in 2014 that helps those with disabilities and their families save money for their care.

The highest-ranking Republican woman in Congress, McMorris Rodgers is also the only woman to give birth three times while serving. In Cosmopolitan magazine last fall, she described missing three weeks of votes while her prematurely born son was in an intensive care unit, as well as the letters from a few constituents who chastised her for running for re-election afterward.

"We need more women and moms in Congress—both in the House and in the Senate," McMorris Rodgers said in a statement to Kaiser Health News. "So we should make sure that the congressional workplace reflects the needs of working moms. The House allows children on the House floor, and I believe it should be allowed in the Senate too."

"My kids, and having all three of them while serving in the House, have made me a better legislator," she added. "Being a mom makes politics real."