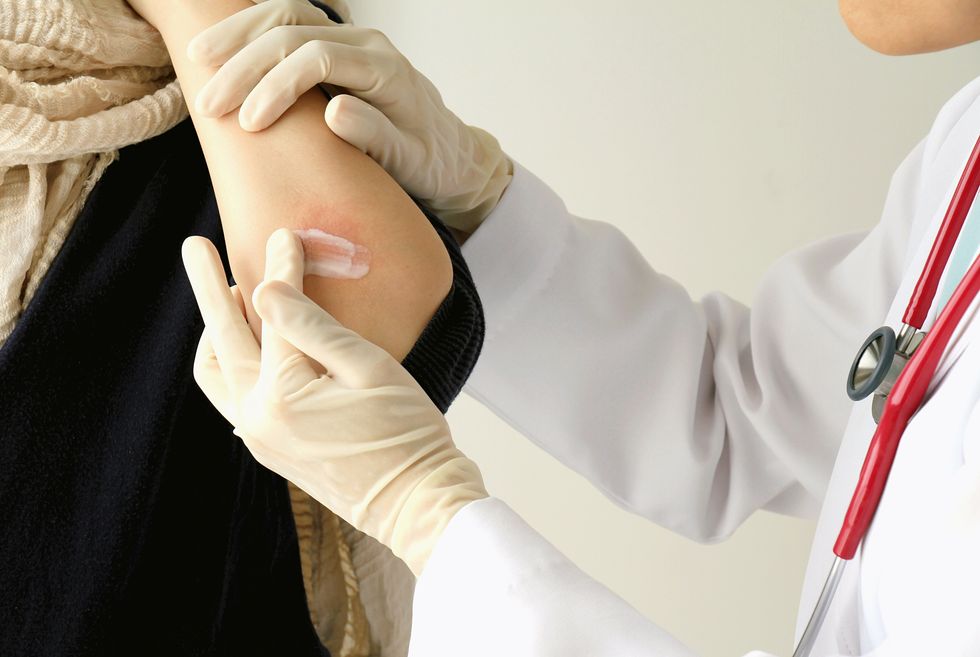 With her pink tresses and eye-catching stage costumes, pop culture icon Cyndi Lauper was never one to hide. But that's exactly what she wanted to do when she developed psoriasis, which spread to most of her body and sapped her strength before the skin dis

WEDNESDAY, Oct. 25, 2017 (HealthDay News)—With her pink tresses and eye-catching stage costumes, pop culture icon Cyndi Lauper was never one to hide. But that's exactly what she wanted to do when she developed psoriasis, which spread to most of her body and sapped her strength before the skin disorder was controlled.

Appearing first on her scalp and later covering everything except her face, psoriasis struck Lauper in 2010 while the Grammy, Tony and Emmy award-winning singer-songwriter—famous for 1980s' hits such as "Girls Just Want to Have Fun" and "Time After Time"—was on tour. She soldiered through appearances despite crushing exhaustion and an inability to regulate her temperature, which left her zigzagging between hot and cold.

"It's funny—you start wearing gloves, or this and that, hoping that [psoriasis] is invisible, but it's not. I wasn't wearing it like, 'Woo-hoo, check this out!' Doesn't everyone hide it?" said Lauper, now 64 and also an actress and author.

"You'd be surprised how many people have it and don't talk about it," she added. "It's one of those things that's kind of invisible, so it's good to talk about it."

Psoriasis isn't just a cosmetic issue, though it often leads to embarrassing physical symptoms. About 7.5 million people in the United States are affected by plaque psoriasis, the most common form of the autoimmune disease, according to the National Psoriasis Foundation.

Marked by silvery, red skin plaques along with flaking, itching, scaling and bleeding, psoriasis has also been shown to raise the risks of conditions such as cardiovascular disease, diabetes and depression.

"It's not a rash, it's an inflammatory disease and could lead to other problems," emphasized Lauper, whose second album in 1986, "True Colors," included the number-one single of the same name.

"Right now, cosmetology is the rage, and I love it, too, obviously. But when you have psoriasis, you have to research what's best for you," she added.

A longtime advocate for equality, Lauper founded the True Colors Fund in 2008 to end homelessness among lesbian, gay, bisexual and transgender youth. She's now extending her advocacy efforts to the psoriasis community through a campaign with pharmaceutical company Novartis.

Lauper, whose albums have sold more than 50 million copies worldwide, tried many psoriasis treatments over the years, including alternative therapies and several that didn't lessen her symptoms. She now takes a biologic drug that effectively controls her disease, but acknowledges that each psoriasis patient's approach to finding relief may vary.

"I'm better now, I found a solution, but my solution may not be someone else's solution," said Lauper, who won a Tony Award in 2013 for writing the music and lyrics for the Broadway musical "Kinky Boots."

"You've got to really do your research," she said. "One thing I've found from others who had it was that they didn't give up. They didn't stop questioning and researching until they found something that works."

Celebrities such as Lauper who go public about their experiences with chronic illness can help raise awareness about their particular disease and its treatments, said Dr. Jeffrey Weinberg, a former medical board member of the National Psoriasis Foundation.

"Obviously we live in a culture where celebrity is given attention, whether it be advertising or disease awareness or marketing," said Weinberg, who is also an associate clinical professor of dermatology at Mount Sinai School of Medicine in New York City.

"I think it's able to help people say, 'If that person has [a disease] and they're able to deal with it, I can also,' " he added. "Maybe they wouldn't have thought that celebrities or people who are well-off deal with the same problems they have."

Lauper's upcoming projects include writing the score for the Broadway adaptation of the 1988 feature film "Working Girl" and contributing a song to the score of the Broadway musical "SpongeBob SquarePants." She recently wrote a song, "Hope," that depicts her own experiences with psoriasis and those of others who struggle with the same disease.

The American Academy of Dermatology has more about psoriasis.