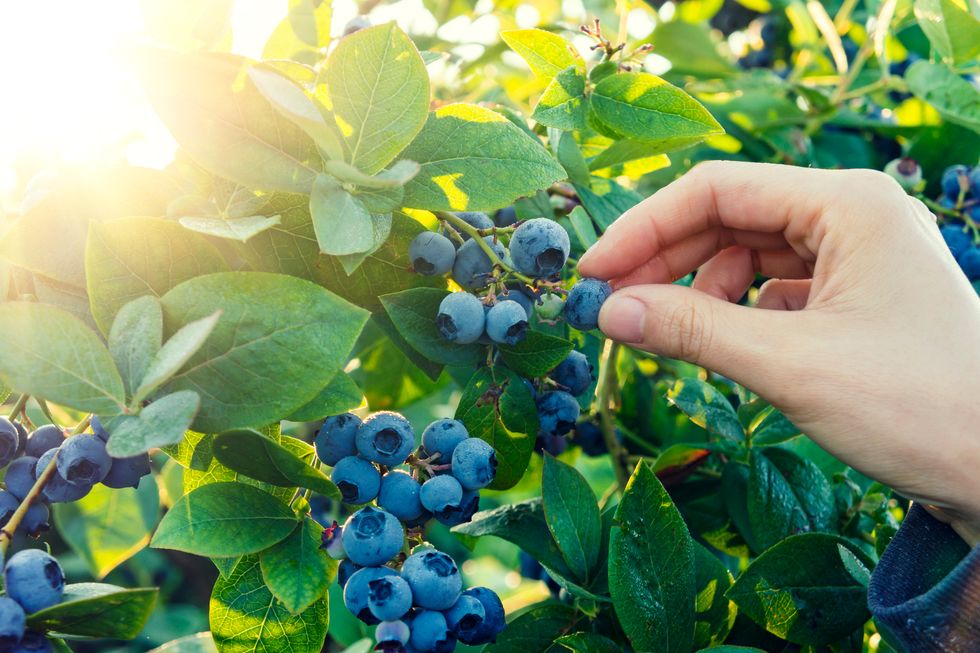 Blueberries! Fresh From the Field

Midsummer is the perfect time to pick and eat fresh produce, and few things are easier or better for you than picking and eating blueberries.

It takes a lot to get me out of bed in the morning, but blueberries had me up and eager to go at 6 a.m. A friend invited me to go blueberry picking with her, and we knew we needed to get out early to beat the heat.

By 7:30 a.m., we'd left city life behind us and were riding along winding country roads approaching a blueberry farm in rural Pungo, about 45 minutes from where we live in southeastern Virginia. We checked in at the ramshackle stand, got our baskets and began wandering the rows of blueberry bushes, tickling the branches to gently coax off the ripe berries.

Blueberry picking is easy. Judging from the number of kids in the blueberry fields, I'd say it's so simple children can do it. There are no brambles, bushes are often at about eye level (with low branches for the kiddos), and insects are minimal—especially compared to the creeping, crawling, flying and stinging critters that seem to love blackberries.

The main thing to remember is that if the berry doesn't easily release from the stem and practically fall into the palm of your hand, then it probably isn't ripe and won't have as sweet a flavor as a fully ripened fruit.

After about an hour, we'd filled our baskets with blueberry goodness, the sun was beating down on us, and rivulets of sweat trickled along our faces and backs. It was time to check out and head home. For only $10 dollars, I had more than 10 cups of berries, all bursting with fresh flavor.

Now what am I going to do with all those blueberries?

Not to worry. For breakfast, I put blueberries in cereal, muffins, and pancakes and on top of waffles and crepes. For lunch, they're perfect mixed into plain or vanilla yogurt or made into Chilled Blueberry Soup. For dinner, I could have a bowl of fresh berries on the side or wait till dessert and have blueberry crumble, blueberry pie or blueberries sprinkled over vanilla ice cream.

You can also add blueberries to salads; create a sweet blueberry sauce for pancakes or blintzes or a savory sauce for meat dishes; or add them to grains, such as couscous, brown rice or quinoa. You can even make blueberry baby food. And don't forget blueberry smoothies.

But, really, my favorite way to eat blueberries is by the handful, nearly every time I pass the bowlful sitting on my kitchen island.

Admittedly, ice cream and pie aren't the healthiest ways to eat berries, but blueberries are superfoods. The Academy of Nutrition and Dietetics says we should eat more blueberries because they're high in antioxidants, which help fight aging, cancer and heart disease, and they're loaded with dietary fiber and vitamins A and C.

Blueberries are a native American species and are widely available and often less expensive than other fresh fruits. They grow in over 30 states, with roughly 90 percent of the world's blueberries grown in the United States, according to the North America Blueberry Council. Harvest peaks in July, which is also National Blueberry Month.

If you're able to get fresh blueberries—either by picking them or buying from a farm or produce stand—buy enough to freeze and use throughout the year. Freeze them unwashed, in a single layer on a tray, and then transfer to freezer bags. When you're ready to use them, take out what you need and wash them.

But be warned: If your family is like mine, the berries may never make it to the freezer. I just finished a bowl of berries, and blueberry soup is on the menu for dinner, probably followed by blueberries on ice cream.