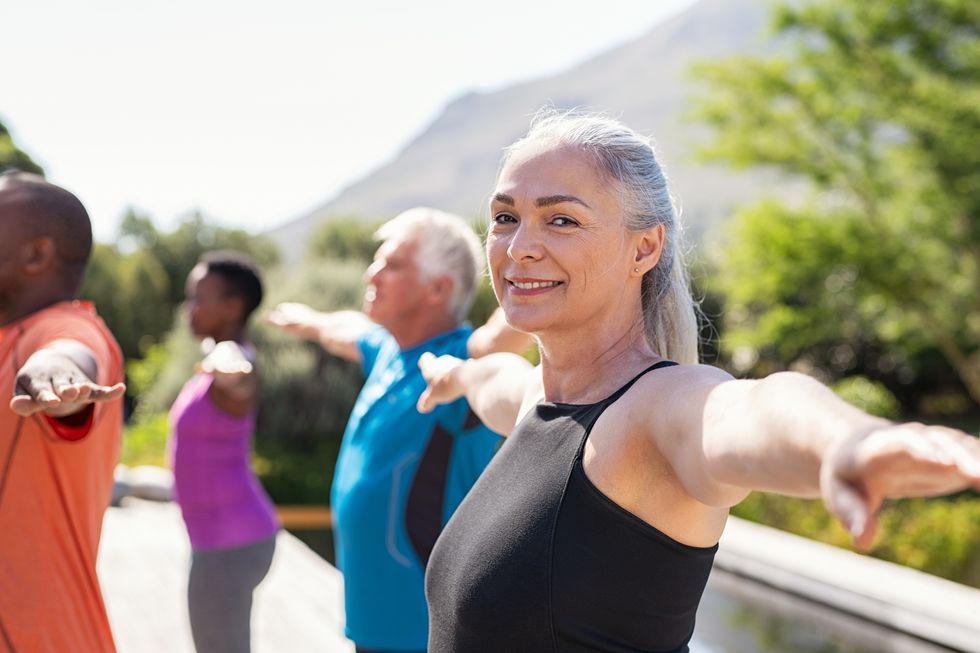 Both high-intensity workouts, such as aerobic exercise or using exercise machines, and low-intensity activity, such as yoga or stretching, can lower depression risk.

A new study in Depression and Anxiety shows that any physical exercise can help reduce a person's risk of depression and protect against episodes of depression, even in those who have an increased genetic risk. In fact, researchers found that for each additional 4-hour exercise chunk per week, the risk of having another depressive episode dropped by 17 percent. Both high-intensity workouts, such as aerobic exercise or using exercise machines, and low-intensity activity, such as yoga or stretching, lowered depression risk. Here are the symptoms of depression you should never ignore.

If you want more health headlines, we've combed through the top stories, so you don't have to do so. Here is what else caught our attention.

Regular Fasting Could Lead to Longer, Healthier Life
Regular fasting is associated with lower rates of heart failure and a longer lifespan, according to two new studies presented at the American Heart Association's Scientific Sessions. Researchers sought to shed new light on the centuries-old debate about how fasting affects health. After adjusting for various factors, researchers discovered that routine fasters had a 45 percent lower mortality rate than the non-fasters during the follow-up period.

Exercise After Age 60 May Prevent Heart Disease, Stroke
A study finds that increased activity over the age of 60 can significantly reduce the risk of cardiovascular disease. It's common for people to become less active as they age. But the study in the European Heart Journal finds that either maintaining levels of activity or becoming more active at this stage of life is important for reducing the risks of heart attack and stroke. Study participants who reduced their levels of exercise over time had a 27 percent greater likelihood of developing heart and blood vessel issues. Those who became more active reduced their risk by as much as 11 percent.

Plant-Based Diet May Prevent Cognitive Decline
New research finds that following a diet rich in plant-based foods and low in animal products during midlife is associated with a significantly lower risk of cognitive impairment later in life. Results appear in the American Journal of Clinical Nutrition. Learn how to increase plant-based diets in your life.

Insufficent Sleep May Harm Bone Health in Older Women
New research in the Journal of Bone and Mineral Research of postmenopausal women has found that those who slept for no longer than 5 hours per night were most likely to have lower bone mineral density and osteoporosis. The study suggests that sleep may negatively impact bone health, adding to the list of the detrimental effect of poor sleep. Get facts about milk.

Studies Confirm HPV Shot Is Safe
Two new studies published in Pediatrics reaffirm past research that the human papillomavirus (HPV) vaccine is safe. The two studies included millions of doses of Gardasil 9 vaccine, the only vaccine currently used in the United States for the prevention of HPV-related cancers. HPV is responsible for more than 33,000 cancers each year—20,000 in women and 13,000 in men. Routine use of the Gardasil 9 vaccine could prevent about 90 percent of these cancers, the editorial accompanying the study said.

Inducing Labor Safer Bet for Late-Term Pregnancies
The risk of newborn death in late-term pregnancies may be lower if labor is induced rather than taking a wait-and-see approach, a new study in Journal of the Academy of Nutrition and Dietetics suggests. Labor induction at 41 weeks looks like the safer option for women and their babies, said researchers in an accompanying editorial.