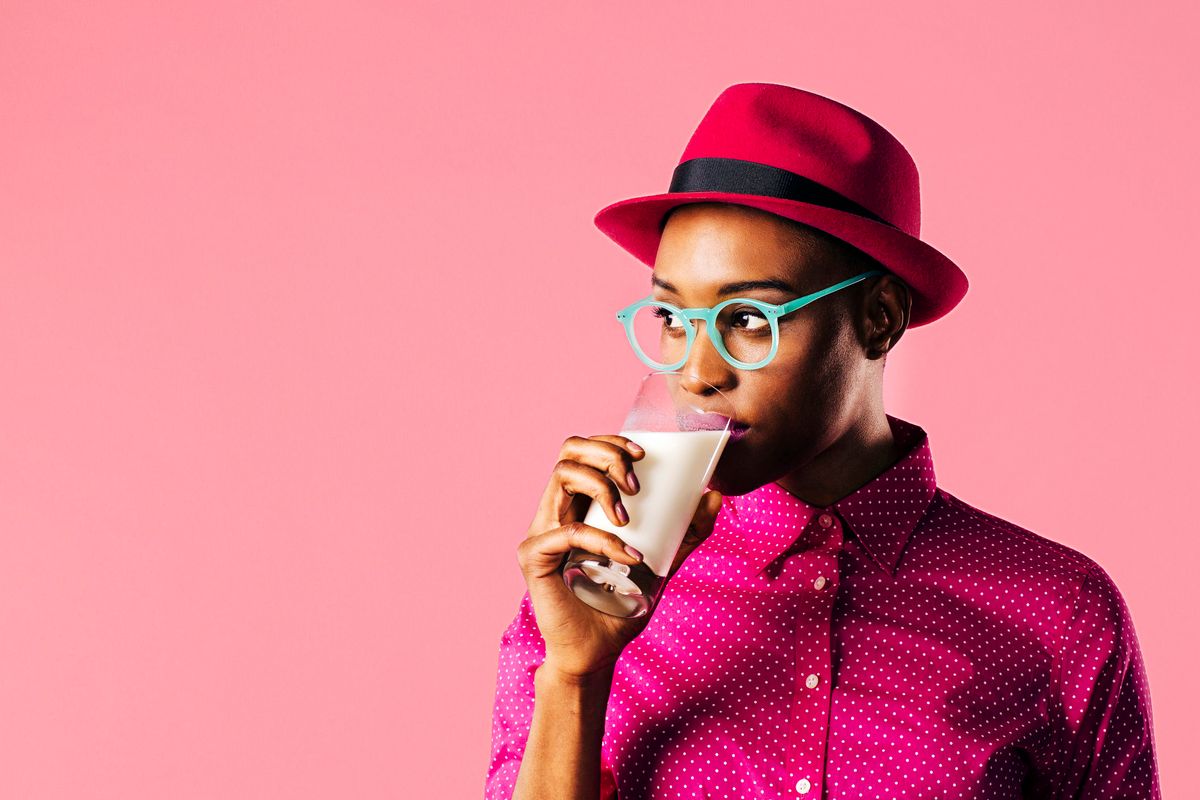 The Facts About Milk

Learn more about the benefits of milk.

I have milk on the brain lately. It all started this past weekend when my dad was visiting. I went food shopping (as I always do before his visits—he loves to eat!) and picked up some almond milk, after hearing people tell me how good it was. Before dad arrived, I opened the carton and poured myself a tiny bit to taste. It was delicious! A tiny taste became a full glass. I was surprised at how good it tasted and was excited to discover something new.

Anyhow, once my dad was settled, I enthusiastically offered him a glass. He looked at me quizzically. "How can they get milk from almonds?" I didn't have the answer, but I was now determined to find out just how it was possible to get milk from this nut. And then I started wondering about all the other milks on the market. (I mean, once milk was just that…milk. Now there are so many varieties out there, it's downright confusing.)

Turns out, it's quite simple to make almond milk. Roasted almonds are blended with water and then strained. The resulting liquid is enriched with various nutrients like calcium, vitamin D and the antioxidant vitamin E. The liquid may be sweetened or flavored. There's no cholesterol, saturated fat or lactose (which is why it didn't bother my tummy the way regular milk does). Calorie-wise, it's a pretty good deal: one cup of the unsweetened variety has just 60 calories. As for protein, I'll have to find my protein elsewhere because almond milk has none.

This morning, I poured some into my blueberry-laden cereal. (Yay! Blueberries are back!) Later, when I have my evening cup of decaf, I'll try it in my coffee.

Wondering about other milks, I did some research and here's what I found:

Soy milk. Its base is extracted from mature soy beans, then mixed with water and some sort of natural sweetener. It is available in sweetened and unsweetened, as well as flavors such as vanilla, chocolate, strawberry and even green tea and coffee. Soy milk is naturally low in saturated fat and has no cholesterol and is slightly thicker than cow's milk. It's safe for people with dairy allergies or those with lactose intolerance. (If you are lactose intolerant, you can still get plenty of calcium from foods like canned salmon or sardines with bones, broccoli and other leafy green veggies, oranges, almonds, Brazil nuts and dried beans, soy milk and tofu.)

Traditional cows' milk. After the cow is milked, the milk passes through the pasteurization process, where it's heated, then quickly cooled, to kill bacteria like E. coli, Salmonella and Listeria. Milk is an excellent protein source and provides calcium and vitamins D and K. Because of the protein that it contains, it helps build muscle; many experts suggest drinking a glass after your workout. Whole milk, scientists found, boosts muscle protein synthesis (an indicator of muscle growth) 2.8 times more than drinking skim milk does. However, whole milk is high in fat and can raise cholesterol. Even if you go for the low-fat variety, it makes a great post workout drink, says Trish Martin of the Golden Door Spa.

And milk may even be helpful for weight loss: one study from the University of Tennessee found that overweight people who drank three servings a day of calcium-rich dairy lost more belly fat than those who followed a similar diet but didn't drink milk. Milk proteins apparently have a fat-burning effect (that's why taking calcium supplements won't do the same thing here). Do you suppose it works as well if you dunk cookies into that milk? Doubtful.

As for antibiotics, if you're uncomfortable, you can purchase antibiotic-free and hormone-free milk, or select USDA-certified organic milk. These cows feast on organic feed and pesticide-free grass. Some studies have found that organic milk contains higher concentrations of omega-3 fatty acids and antioxidants, although other experts will not vouch for any nutritional difference between organic and regular milk. Organic milk is pasteurized just as regular milk is.

Rice milk. This is made from a mixture of partially milled rice and water and is least likely of all milk products to trigger allergies. It's available in various flavors which include chocolate, vanilla and carob. Like soy milk and almond milk, it doesn't have to be refrigerated until you open it. Rice milk contains no protein, but as a plus, also contains no saturated fat or cholesterol.

Raw milk. It comes from a cow, too, but the difference is that it is not pasteurized. And it contains more calories and fat than pasteurized whole milk. While advocates say that pasteurization destroys beneficial bacteria and other things that aid digestion, health experts are wary of unpasteurized milk, saying that it puts you at risk of serious food-borne illness or serious infection. A word of caution: the CDC reports that raw dairy products caused 82 percent of milk-borne illnesses between 1973 and 2008; they say a glass of raw milk may contain milk from hundreds of cows.