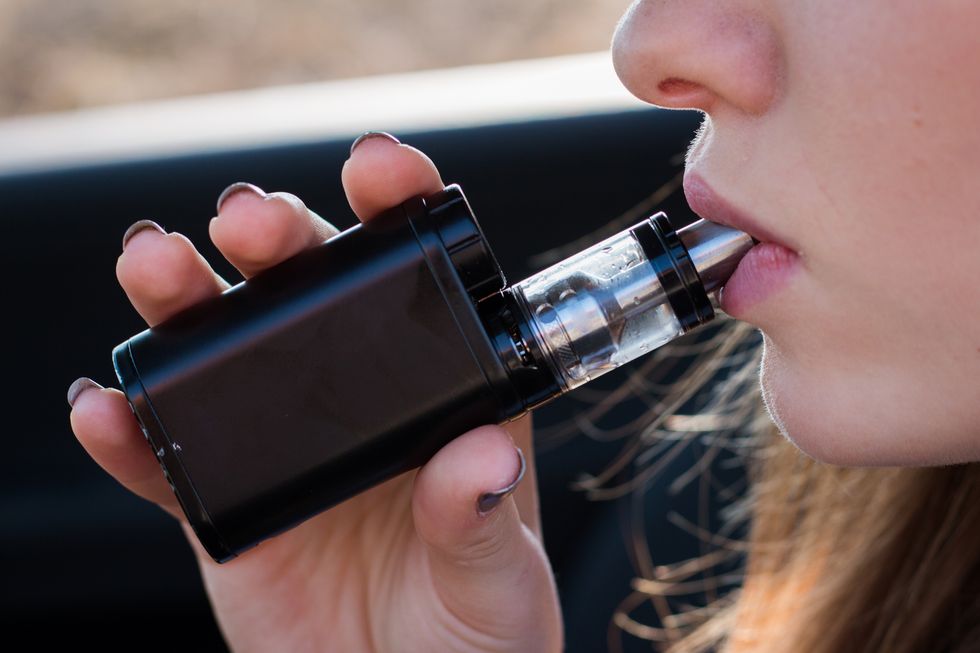 Vaping is Bad for Everyone, and It's Especially Unhealthy for Children

Vaping and e-cigarettes have become an epidemic. This is a serious public health and women’s health problem because many adolescents and young people have started vaping recently, and vaping is now associated with deaths and of severe lung injuries.

Vaping has become wildly popular in the U.S. in the past few years. What started as a minor e-cigarette industry has exploded into a vaping behemoth. This growth industry is of great concern to women, families and overall public health because of the dramatic increase in youth vaping in recent years and new reports of serious lung injuries and several deaths from the practice. Here are the bottom-line facts for women's health:

Those and other facts for this public health epidemic to consider are discussed below:

Origin and Health Effects of Vaping

E-cigarettes were originally touted as a "healthier" alternative for smokers than burning tobacco, which has carcinogenic tar-like compounds. However, e-cigarettes do contain nicotine, which is not only toxic, but highly addictive – perhaps as addictive as heroin and cocaine. And more worrisome is that some forms of nicotine in vaping liquids may be absorbed faster than the nicotine from burning tobacco. This characteristic leads to a higher and more rapid increase of nicotine in the blood stream, which may trigger addiction to nicotine more quickly, and lead to more frequent vaping. In addition, some chemicals in vaping liquids may harm a developing fetus.i

Inhaling either the products of burned tobacco or the heated vapor from e-cigarettes introduces compounds into the lungs that they are not designed to manage. The primary function of the lungs is to exchange gases, i.e., oxygen for carbon dioxide. The lungs also have a role in the immune system and have the capacity to expel inhaled microparticulates. Smoking has been shown to decrease this important ability. Inhaling through the mouth by vaping also bypasses the filtering function of the nose and the complex airway provided by the nasal passages that help keep unwanted things out of the lungs.

New Evidence of Harms from Vaping

As of September 6, 2019, the CDC has reported 450 possible cases of serious lung injury and several deaths associated with vaping. It is highly likely that by the time you read this article those numbers will have increased. The specific causes of those injuries are still being investigated. Two leading theories identify direct toxic damage to the lungs from nicotine, flavorings,ii other chemicals in the vaping liquids, or from oils, resulting in lipid pneumonia.iii This form of pneumonia is a serious health condition that occurs when small droplets of oil in the lungs cause an inflammatory reaction that can lead to fibrosis and permanent scarring and loss of lung function.iv No matter what the specific cause (or causes), the severity of the reaction very likely depends on the type of compound or oil and the length of exposure.

The oil theory for the current outbreak of lung injuries and deaths seems to be gaining traction. What may be happening is that oils that are safe when ingested – and they are often approved by the FDA as food ingredients, additives or dietary supplements – are being used in vaping liquids. The difference is that ingesting a food additive into your stomach is a much different process than inhaling something into your lungs.

Oil is a component of vaping liquids containing THC because THC does not dissolve in water. Several of the severe cases of lung injury recently report have been linked to vaping THC. Another recent report suggests some vaping liquids may contain Vitamin E oil, which is also sold as a nutritional supplement.v Vaping liquids may also contain vegetable glycerin, which may cause lipid pneumonia.vi Adding to the uncertainties about the health dangers is the fact that vaping liquids are available from a variety of sources from original manufacturers, to grey-market companies and local or home-made mixtures.

Compounding the worry about this trend is that children and adolescents may be attracted by the various flavors of vaping liquids without understanding the health risk of the nicotine ingredients. Specifically, misconceptions among younger users include:

Aside from the lung damage noted above, nicotine has serious risks for a child's development. As the U.S. Surgeon General concludes, "adolescents can get addicted more easily than adults. The nicotine in e-cigarettes and other tobacco products can also prime the adolescent brain for addiction to other drugs such as cocaine." And further, "The part of the brain that's responsible for decision making and impulse control is not yet fully developed during adolescence. Young people are more likely to take risks with their health and safety, including use of nicotine and other drugs. Youth and young adults are also uniquely at risk for long-term, long-lasting effects of exposing their developing brains to nicotine. These risks include nicotine addiction, mood disorders, and permanent lowering of impulse control. Nicotine also changes the way synapses are formed, which can harm the parts of the brain that control attention and learning."ix

What the FDA and CDC are Doing

The FDA and the CDC have taken great interest in this situation. Since 2016, the FDA has had the authority to regulate tobacco products, including e-cigarettes. The FDA is working with the CDC to investigate cases of lung damage and deaths, and both are putting out information for the public and the media.x, xi The FDA has also been in contact with the companies that make vaping product (particularly the flavored vaping liquids), with a stern warning about changing their products and marketing, and threatened to ban all vaping products.xii How the FDA proceeds will likely depend on new information from their investigations with the CDC and others, including updated information about youth vaping and the harms that is having on developing minds and bodies.

What You Can Do

Don't let vaping overturn the progress we've made by reducing teen (and younger) cigarette smoking. If you want to let the Administration know how you feel about this issue, you can contact the President or the Secretary of Health and Human Services.

iv This is also why inhaling "cooking sprays" that are used to coat pans is not a good idea for your lung health – and the same is true for the vapors inside microwave popcorn bags, which can cause a condition called "popcorn lung." https://www.webmd.com/lung/popcorn-lung#1