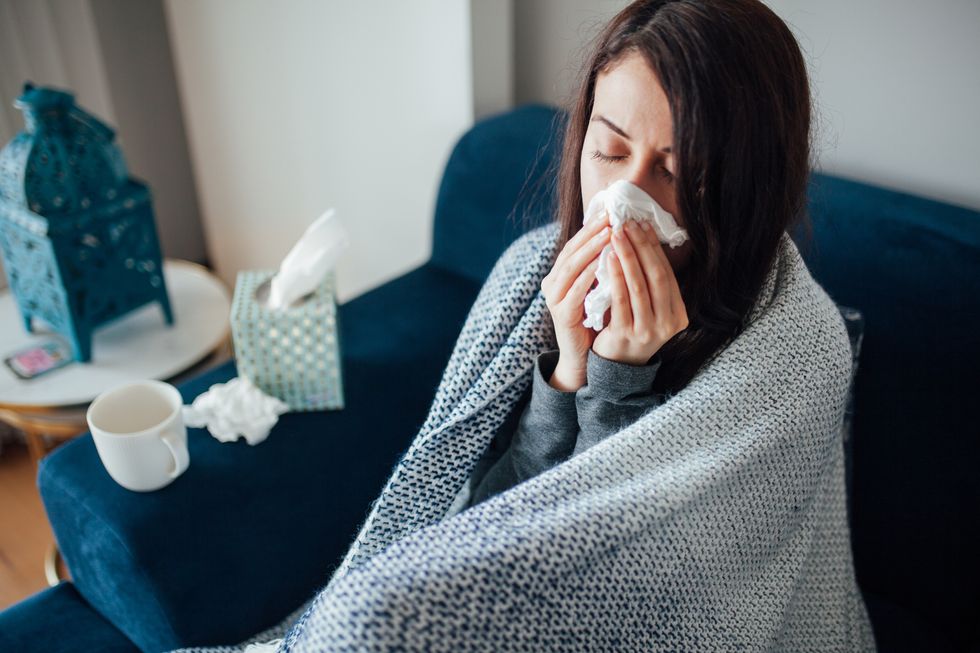 Everything You Want to Know About the Flu Virus

If you really want to know what a flu virus is like, check out this Q&A for answers to all your questions.

Over the years, I've interviewed hundreds of medical experts. But by far, among the most interesting and revealing interviews are those I've done with the culprit itself—like the time I interviewed a tick and, another time, a mosquito. Those types of interviews give me the perfect opportunity to delve into the most personal questions and gain a full understanding of what makes them, um, tick.

For this interview, I was lucky enough to catch a flu virus (not personally and hopefully not at all) and get the scoop on how it thinks.

Q: Tell me a little about yourself.

Flu Virus (FV): I'm a contagious respiratory illness that loves to lodge in your nose and throat—and sometimes your lungs, too. To date, I get a gold medal for doing the most damage in 1918 (yes, I've been around quite a while), when there was a pandemic that infected about 500 million people (that was roughly one-third of the world's population) and killed about 50 million people nationwide (about 675,00 in the U.S.).

As you can see, I take myself pretty seriously and have a big job to do.

FV: I love the fall and winter. They're both very hospitable to me, allowing me to thrive. Usually, the months between December and February keep me the busiest. And sometimes, even though it's not my favorite month, I'm still around come May.

FV: Well, I must admit that as a virus, I don't have a lot of fans. But I can tell you what I look for in a friend and what helps me become more notorious: a person who doesn't get the vaccine. They pay it forward by putting not only themselves at risk, but those around them as well. By the way, you're most contagious in the first three to four days of having the flu. But you can infect other people even before you realize you're sick and before symptoms develop—and up to seven days after becoming sick.

Likewise, someone who is already infected with me who coughs or sneezes without covering their mouths or washing their hands, that's a pretty sure way of knowing they're spreading me around. (A little-known secret I'm willing to share: I can survive for more than eight hours on hard surfaces, like stainless steel and plastic.)

Q: What about your enemies?

FV: Obviously, my biggest enemy is the flu vaccine, even though it's not perfect. Sometimes the scientists don't get it right, and it doesn't protect against the strain that's around that particular year.

You see, I'm pretty creative and stealth-like and can change into different strains each year. These scientists give it their best shot (ha!) when they try to figure out which strains to include in the vaccine. (They're kind of like weathermen—sometimes they predict a sunny day when instead, it pours.) Those decisions are usually made by looking at which viruses are making people sick, how much those viruses are spreading and how effective the vaccine was last year.

Some years, the experts are like mind-readers, and they're able to figure out the viruses that will be circulating. But sometimes they miss, and I'm able to get away with much more. I've gotten pretty good at mutating genes, so we viruses can fool everyone's immune system. Even the smallest change can arm me with a virus the vaccine can't recognize. (I like to go undercover like that.) That's why some years are worse than others.

Q: How do you choose your victims? Surely some appeal more than others.

FV: Basically, I like everyone, even healthy people and babies. There's no discrimination there. But people who have been vaccinated obviously make less likely victims.

Read about Habits of People Who Don't Get Sick

Q: But when you infect, you don't do it the same way for everyone. In other words, I know you can get more aggressive with certain people. It would be good for them to know who they might be.

FV: Although I like everyone, there are some people who are going to be in more trouble than others if I infect them. It ranges from young children and pregnant women to older people and those with certain health conditions like diabetes, heart disease, asthma or a compromised immune system. If you're young and healthy, you're much less likely to let me wreak havoc with your body and cause complications.

FV: I've been known to cause illnesses like pneumonia, bronchitis, secondary ear infections, sinus infections, and even trigger asthma attacks in people who already have asthma.

And if I really want to get antagonistic, I can leave behind some pretty serious things like an inflammation of the heart (myocarditis) or brain (encephalitis) or cause organ failure.

Q: Are there any tests that can scout you out?

FV: Yes, they can detect me by doing a nasal or throat swab. One of the most common is called a rapid influenza diagnostic test, or RIDT. It's pretty quick—10 to 15 minutes to find out—but it's not as accurate as some other tests, meaning if it comes out negative, I could still be lurking. If you're willing to wait longer for test results, there's another type that takes about 15 to 20 minutes, called a rapid molecular assay. And then there are more sophisticated tests that are done in special laboratories in hospitals or state public health laboratories, which can take a few hours.

Q: How do people know it's really you and not another virus, like a cold?

FV: That's a question I get a lot, since we share similar traits. But in general, I'm a pretty intense virus—a lot worse than a cold, with more extreme symptoms.

I don't usually wait around, teasing you with things like sniffles and a sore throat. Rather, I burst onto the scene quite suddenly. Here's how you can recognize me:

Usually, but not always, a fever

Sometimes vomiting and diarrhea (but that's usually reserved for children, not adults)

Read more: Is It a Cold or the Flu?

Q: So, once you've settled in for a visit, how does one get rid of you?

FV: Time was when there was nothing to do but wait me out. But now, if you want to kick me out sooner, there are prescription medications called antiviral drugs that can lessen your symptoms and cut down on the time you're sick by about a day or two (especially if you take them soon after I settle in). These drugs can also lower the chances of serious complications. They're not a substitute for the vaccine, of course, but rather a second line of defense.

Q: How long will you hang around?

FV: It all depends on how comfortable I feel. Some people will succeed in kicking me out in a few days, but I've settled in with some folks for as long as two weeks. I typically leave sooner when people have been vaccinated or take antiviral drugs upon my arrival.