Sarah Jaffe is a freelance writer, lawyer, and mother of a toddler. She writes about parenting, healthcare, the foster care system, and books. Her work has appeared in Slate and Bklyner. Find her on Twitter @sarahwinifred. 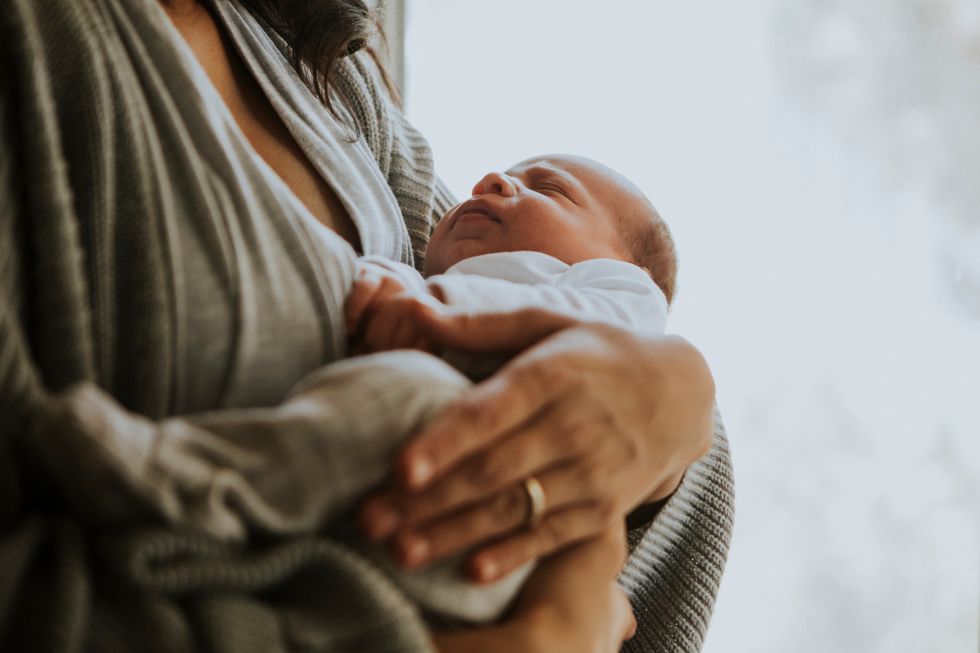 How My Struggle to Breastfeed Led to Postpartum Anxiety

How My Struggle to Breastfeed Led to Postpartum Anxiety

I'd always been a good student and so of course, I wanted to get breastfeeding right. But it was challenging and affected my mental health greatly.

At every prenatal appointment I went to, the nurses would ask if I was planning on breastfeeding. I would always say "yes." It was clear to me that this was the only acceptable answer, but it was also true. I didn't see any real reason why I wouldn't. One nurse followed up by quizzing me: "So, can you tell me three benefits of breastfeeding?"

Part of me rolled my eyes at being treated like a student. But I'd always been a good student. I'd always wanted teachers to like me, and to give me a gold star. I listed three benefits, and she nodded in approval. I felt like I'd gotten an A.

The first night of my daughter's life, everything went according to plan. A few hours after she was born, she was calmly nursing when a nurse came into the room. "You are both doing a very good job," she said. Again, I felt like I was getting a gold star.

But the next day, it started. When I tried to breastfeed my baby, she would cry and arch away with the full force of her tiny body. I tried again and again. A lactation consultant arrived and told me to take off her onesie to have "skin to skin" contact. But still she arched and screamed. This agony went on for hours. The same nurse who'd praised me the night before came in to find both my daughter and I sobbing.

"What HAPPENED? You were doing so well!" she said, her voice sharp with disapproval. I felt like a child being scolded. We asked for formula, but she refused, since we'd previously had a "good latch." After the shift change, my husband pestered a different nurse into reluctantly giving us some formula. My daughter drank half the bottle happily, and her screaming stopped.

But her screams seemed to switch a flip in my sleep-deprived brain. Even though I knew we were supposed to discard the formula once it had been unrefrigerated for 2 hours, I hid the half-bottle under the bed. I was afraid they wouldn't give me another one, and I'd have no way to stop her hungry screams. I knew this reasoning didn't make any sense, but I felt like I was floating above myself, watching myself lose my grip.

Once we got home, the panicky feelings didn't subside. The most maddening thing was that breastfeeding would sometimes work—just enough to make me keep trying. At every appointment, I was told that there were no problems: my supply was good, my baby was gaining weight.

"But often she screams when I try to feed her," I said. No one had any suggestions for that. Instead, they told me repeatedly that it was important to keep trying to breastfeed.

At times, when I looked down at her red, screaming face, I felt this intense, hot rage. I felt locked in battle with her. I couldn't slow my brain down enough to sleep well, even when she slept. I would have flashing thoughts of hurting her: seeing myself dropping her over the balcony, letting her stroller roll out into traffic. I didn't want to do those things—I was horrified that my brain could imagine them—but they were there. I also felt constantly, almost debilitatingly panicked that she would die.

When my daughter was around 9 months, I gave up breastfeeding. It felt like I'd been in a game of tug-of-war and dropped my end of the rope. My daughter happily ate solid food and formula bottles, and the hours of screaming stopped. Around that time, I read an essay about another mother's experience with postpartum anxiety (PPA). I hadn't known PPA existed as a diagnosis separate from postpartum depression. But the list of symptoms sounded familiar: racing thoughts, constant dread, inability to sleep even when your baby is sleeping. Knowing there was a reason for my feelings— that this wasn't simply "new motherhood"— helped me begin to see my way out. I never sought help for PPA, mostly because by the time I realized what was happening, my symptoms had started to abate. I recovered fully without treatment, although I wish I'd had more support at the time.

My daughter is two and a half now, and when I write about those dark days of her early life, it feels like I am writing about someone else. I wish that during those first months, I could have traveled forwards in time to glimpse the talkative, joyful kid she has become. But I also want to travel back in time: to have her infancy to do over again, to see how it would have been if I cared less about getting a seal of approval for breastfeeding, and more about what felt right for both of us. If there is any silver lining to those dark nine months, it is my realization that my own approval—and my daughter's— is the one that really matters.

Sarah Jaffe is a freelance writer, lawyer, and mother of a toddler. She writes about parenting, healthcare, the foster care system, and books. Her work has appeared in Slate and Bklyner. Find her on Twitter @sarahwinifred.