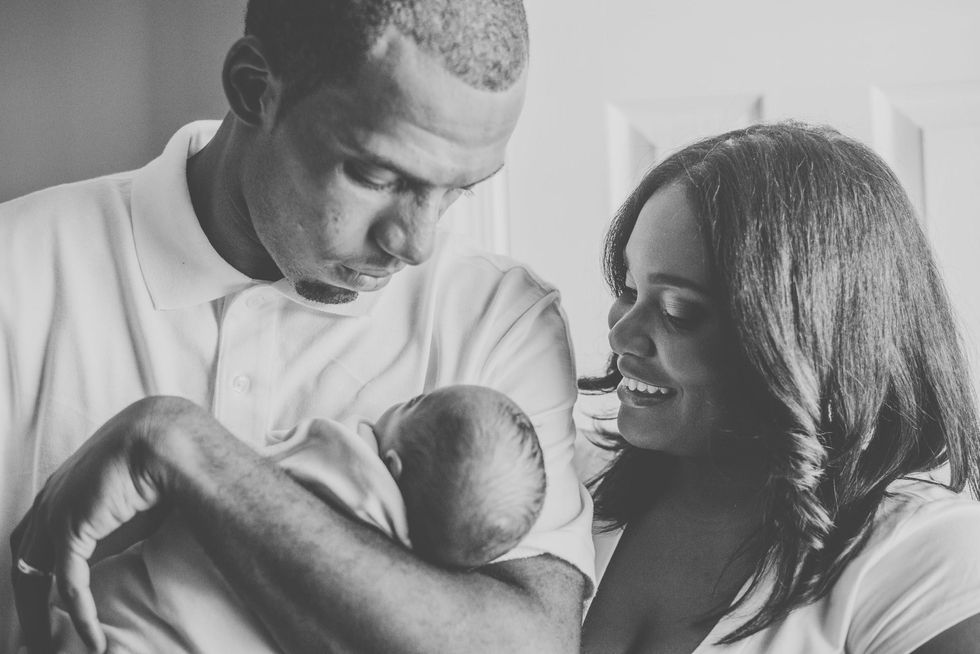 I was grieving a birth experience and suffering PTSD, but I believed I needed to do it all on my own.

I was 23 weeks pregnant with my second baby when out of nowhere, I got a splitting headache and swollen feet. Nothing like this had happened during my first pregnancy, and after hours of pain I started to worry. I drove myself to urgent care since my husband had to stay home with our three-year-old daughter. After numerous tests, I was shocked to learn I had high blood pressure and protein in my urine.

At a different hospital, my doctor told me I had severe preeclampsia, a pregnancy complication which is still poorly understood and has no cure. After a week of bedrest at home, I spent another three weeks in the ICU, lying immobile on my left side while they tried to control my rising blood pressure and delay my baby's birth as long as possible.

I'll never forget the day my blood pressure shot back up. A flock of care providers descended on my room. "You're on the verge of a stroke," the doctor said as they rushed me to the operating room for an emergency Cesarean-section. My husband, who'd been back home, came running down the hall to make the surgery just in time.

At 27 weeks, I found myself lying on a cold narrow operating room table, magnesium sulfate burning through my body. I was fighting for my life after a perfectly healthy pregnancy three years earlier. Then I heard the tiniest cry.

"Honey, did you hear that?" My husband leaned into my cheek. "We have another little girl."

I couldn't open my eyes. Voices swirled around me. "She's breathing on her own, but we're going to incubate her so she can focus on getting bigger. Do you want to see her first?"

They took Adalyn Marie to the neonatal intensive care unit (NICU). It would be another three days before we met.

Paralyzed with fear and exhaustion, I finally felt capable of looking into the incubator. My tiny daughter was perfect. I fell in love with her and barely left her side for another two months

But if spending 70 days in the NICU with my newborn (and away from my preschooler, Alonnah) wasn't enough, life had another curveball to throw. Just two months after bringing home three-pound Addy, our miracle baby, I learned I was pregnant with number three.

Terrified thoughts raced through my mind: What am I going to do with three kids? We can't afford this. How could I let this happen?

My anxiety manifested as emotional rage as I stormed out of our bathroom, holding the positive test. I don't have words to describe the shame I felt carrying that third child.

I felt embarrassed for getting pregnant while barely able to care for the children I already had. I felt crippling fear that I was pushing my luck attempting to carry another baby to term. I'd already gotten lucky enough to beat death myself, and Addy had overcome all the odds against her. This time something bad was sure to happen, right?

Over the next few days I drifted into a nomadic state. Life became foggy. I don't remember much beyond the daily routine of feeding the kids, making sure Addy's diaper and nasal tubing were changed, setting up cartoons for Alonnah, and waiting for my husband to come home. No showers, no need to eat. I only needed to survive until he returned.

I was exhausted. My body felt heavy. The days and weeks ran together until one morning I woke up and realized it had been six weeks since I learned I was pregnant.

After arguing with my husband over anything and everything, we decided to seek out a counselor. I was fed up with my marriage. My life felt empty and I was getting ready to have another baby.

No one had talked to me about intrusive thoughts. No one told me that nearly 50 % of pregnancies in the US are unplanned. No one normalized the shock, panic, fear, grief and trauma I was experiencing.

All I had was an irrational expectation of motherhood handed down for generations. I believed doing it all on my own was a badge of honor. That being strong and alone was better than being vulnerable with a community. That the demons I battled in our home were between us and God, and everyone else needed to see we had everything under control. That I was not weak, crazy, or broken. I could get over it.

Except I couldn't "get over it." I was so deep in the waves of postpartum depression that I thought nothing was wrong. I was grieving a birth experience and suffering post-traumatic stress disorder (PTSD) from my excruciating journey through preeclampsia and the NICU. I needed professional help.

Luckily I got it, and with the help of medication and counseling, the fog started to lift. Now my beautiful daughters are nine, five, and four years old. I've become a perinatal mental health professional, a doula, and the director of a family wellness center that offers preventive care for the most transformative life adjustment there is. We need to talk to new moms about the challenges of motherhood.

One in five mothers worldwide will experience a perinatal mood or anxiety disorder. It's up to us to raise our voices and stand with every mother who feels she is crazy or broken. We must arm ourselves with knowledge about what to expect during pregnancy, birth and postpartum. By telling our stories, we free other women from the shame, guilt and sense of inadequacy that are a normal part of motherhood.

Meisha Shockley is the CEO and Founder of Shore Grace Family Wellness. She leverages her expertise as a Perinatal Mental Health Advocate to provide quality support, education and services surrounding pregnancy, birth, and postpartum. A mother of three and a doula, Meisha volunteers at the local pregnancy center, where she assists families experiencing crises through unplanned pregnancy.