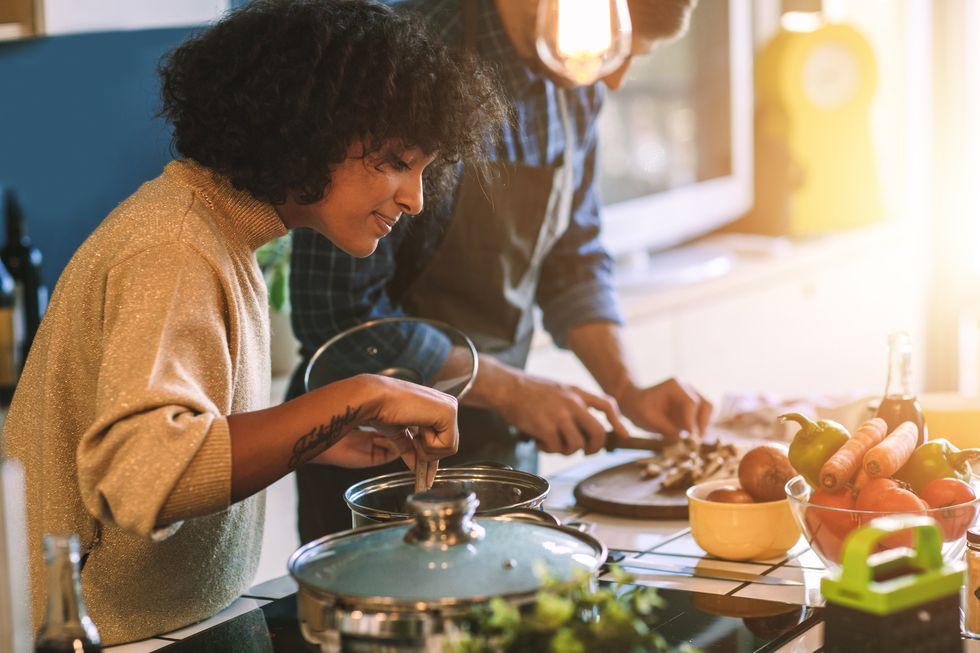 If you're tired of dieting, it's time to try intuitive eating, a common-sense approach to eating that encourages you to trust your own inner cues.

Year in, year out, people diet. A lot of people—that number is estimated to be 45 million.

And since we're talking numbers, Americans invest about $33 billion each year on weight-loss products.

Then why are nearly two-thirds of Americans overweight or obese?

Clearly, too many people are losing their battles. Dieting may help them lose weight, but one thing it doesn't do is help them keep the weight off.

Then, they desperately purchase tickets for the next diet rollercoaster, making stops along the way at Whole 30, keto, paleo, South Beach or whatever is trending and promises to be the holy grail.

Read more about What's the Best Diet to Lose Weight?

Most people I know have struggled with weight throughout their lives, whether it be through emotional eating, poor eating habits, stress, a hectic lifestyle or menopause and midlife weight gain. And I've also seen many people jump from one diet to the next, all the while ending up with a net weight gain, only to begin the process once again.

Learn more about how to fight menopausal weight gain with diet and exercise.

That's the diet culture, I suppose. It promotes weight loss but doesn't exactly keep its promise.

And yo-yo dieting (aka weight cycling) can have real health consequences: Losing weight and gaining it back again might affect your blood pressure, diabetes and cholesterol levels, in turn increasing your risk of a heart attack or stroke.

Maybe it's time to ditch the dieting mentality for good.

One diet that's not trending, but should be, is not a diet, exactly. It's a way of eating. It's called intuitive eating (or sometimes "mindful eating").

You've likely done it when you were a child, before you were conscious of anything called a diet. You simply ate when you were hungry and stopped eating when you were full. You ate what your body and taste buds craved without feeling guilty and suffering self-hatred. Dessert didn't feel like a "treat" or a "cheat."

Unknowingly, you were trusting your body's inner wisdom to choose when and what to eat.

Food was to be enjoyed, not to be labeled as some sort of enemy that was out to destroy you.

Intuitive eating is growing. According to surveys, it's doubled in the last five years and continues to rise. The term was coined in the mid-'90s describing a non-diet lifestyle encouraging people to rely on their own hunger and fullness cues rather than external cues (like looking at the clock to tell you when to eat lunch or experiencing guilt or an ethical dilemma over food, for example).

Rather than a diet, it's a sustainable way of life and an ongoing process where weight loss, rather than being the goal, is a benefit.

Intuitive eating is associated with better mental health and a lower risk for eating disorders and obesity, according to research, and has so many other perks.

Hungry for more? To fully understand intuitive eating, read all about the 10 principles, from the two dietitians who developed it 25 years ago, here.

I've been unknowingly practicing intuitive eating basically all my life. Maybe part of that is because I'm more of the eat-to-live variety than the live-to-eat personality. If you're of the latter persuasion, it might be tough at first to abandon dieting and allow yourself to eat without restriction. But experts say that keeping your body biologically fed and balanced will keep you from overeating, and that having access to what you really want to eat will prevent deprivation cravings and later bingeing.

One important part of that practice is to pause in the middle of eating and take time to notice the taste of your food and ask yourself what your current hunger level is.

I think intuitive eating is a common-sense way to approach something (food) that should be a joy and satisfaction, rather than a burden filled with guilt and confusion.