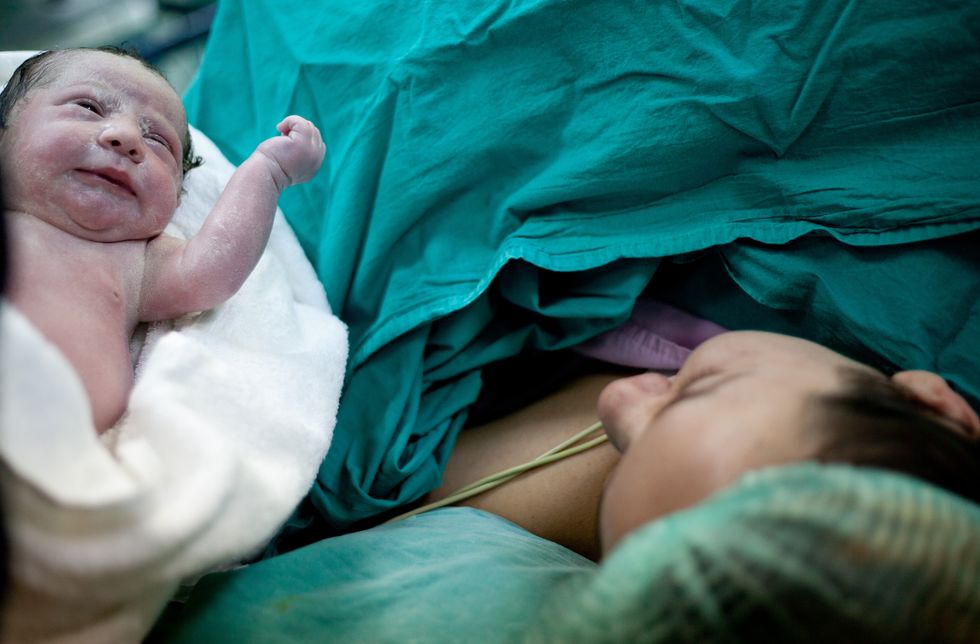 The Surprising Mental-Health Consequences of General Anesthesia During Birth

A new study finds a strong link between general anesthesia and postpartum depression.

Becoming a new mother is a transformative experience, and for women who experience postpartum depression (PPD), it can be one of the darkest, most crippling times. Even the smallest tasks—likeswaddling the baby or making a bottle—can be overwhelming when experiencing symtpoms of PPD, which can include feelings of disconnection, severe sadness or even thoughts of suicide and self-harm. (Note that not all who give birth or experience PPD identify as women.)

Although up to one-in-seven women may experience symptoms of perinatal depression during or after a pregnancy, research on maternal mental health research has been relatively sparse when compared to other public health concerns. The issue is now receiving more attention, and researchers have recently broken new ground by examining topics like the link between postpartum pain and postpartum depression.

And now, for the first time, researchers have explored the relationship between PPD and anesthesia used during cesarean births. A recent study in the journal Anesthesia & Analgesia found a surprisingly strong connection between general anesthesia and postpartum mental health problems.

Researchers at Columbia University led by Jean Guglielminotti, MD, PhD, and Guohua Li, MD, DrPH, examined data from more than 428,000 cesarean deliveries in New York state hospitals between 2006 and 2013. Of those deliveries, eight percent involved general anesthesia. Compared to mothers who received regional anesthesia (such as an epidural), mothers who received general anesthesia were 54% more likely to develop PPD and 91% more likely to have suicidal ideation or self-harm.

"General anesthesia for cesarean delivery may increase the risk of postpartum depression because it delays the initiation of mother to infant skin-to-skin interaction and breastfeeding, and often results in more acute and persistent postpartum pain," Guglielminotti told Columbia's Mailman School of Public Health. Her co-author, Li, suggested that women who undergo general anesthesia during casearans should receive "mental health screening, counseling, and other follow-up services."

This first-of-its-kind research deepens understanding of the risks of various pain management options available during labor and delivery.

According to Rashmi Kudesia, MD, general anesthesia is reserved for imminent birth circumstances, such as when a sustained drop in fetal heart rate or maternal hemorrhaging requires swift intervention. The goal is to save mom and baby by allowing for a quick delivery.

But being put to sleep during birth means missing out on important milestones like baby's first cry, nursing, and immediate skin-to-skin contact. The cumulative effects of the delivery circumstances might trigger unintended emotional consequences.

"After an emergent delivery, depending on the circumstances, the patient or her child may need extra care or have a longer recovery, which can also impede parent-child bonding," said Kudesia, an associate professor of clinical obstetrics and gynecology at Houston Methodist Hospital and a member of HealthyWomen's Women's Health Advisory Council.

Kudesia said that "near-impossible" social expectations about birth experiences can make emergency deliveries even more difficult to process. "A woman may feel that the delivery deviated far from her hoped-for birth, even if both she and her baby are ultimately healthy," Kudesia told HealthyWomen.

Better understanding the risks of general anesthesia may help a woman make more informed choices earlier in the labor process.

"For most women with a functioning epidural, if they need an emergency cesarean section, the anesthesia can be delivered via the epidural, and general anesthesia is not required," said Kudesia. She suggested that women in labor who experience "trends that suggest the possibility of impending cesarean section," such as a fetal heartbeat trending in the wrong direction, could consider having an epidural placed.

The new research finding on general anesthesia raises additional questions, such as how women can best be screened and treated following emergency deliveries.

Said Kudesia,"To me, one of the most important takeaways [from the study] is that a traumatic birth does influence postpartum mental health."

The Gentle Cesarean: More Like a Birth Than an Operation