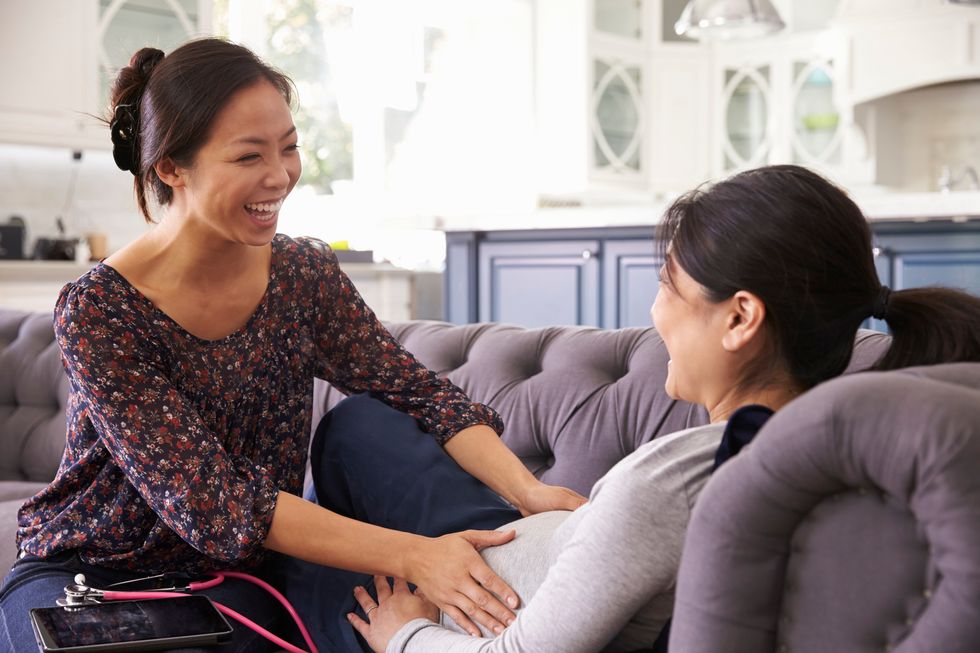 A Midwife's Take on How Birth Is 'Managed' in the US

Each labor and delivery is different, so there's no one "right" way to do it. But this midwife thinks it may be time to take a new look at birth practices and interventions in the U.S.

I was eight years old the first time I saw a birth. My parents worked at a mission hospital in the United Arab Emirates where more than 200 babies were born every month, delivered by nurse-midwives from either Australia or India.

They enlisted my help in sterilizing instruments, cleaning up, helping moms get to the bathroom after the birth and, in exchange, I had the opportunity to witness the miracle of birth. Now that I am older I realize how lucky I was to know exactly what I wanted to be at such a tender young age—a midwife.

When I returned to the United States for college in 1979, I was told, "We don't use midwives in the United States. You need to be an OB/GYN if you want to deliver babies." In retrospect it's fortunate that my lack of commitment to the idea of medical school precluded me from excelling in my pre-med courses.

So, when I found myself single and pregnant three years later (as the daughter of a Baptist ordained minister and missionary this could fill its own blog!), I gave up on the idea of medical school.

My son was born shortly before the first nurse-midwife came to Kalamazoo, Michigan, so I sought the services of a female OB/GYN, and he was born in a birth center with little intervention.

To say it was empowering is an understatement. However, I did not feel supported by my physician, who cut an episiotomy that extended to a fourth-degree (into the rectum) tear. She also wanted to move me to the delivery room to use forceps (I said no).

Fast-forward to 1995—two more children and pregnant with my fourth when I graduated from the University of Michigan with a master's in nurse-midwifery. I finally realized my dream and, in the 25 years since, I have birthed over 2,000 babies. While it may sound cliché, the miracle is still there for every birth. (It's worth mentioning that most midwives prefer the term "birthed" over "delivered," because it's the mom who does the work.)

While some midwives and nurse-midwives attend home births, my practice has been primarily hospital based. I am an advocate for home birth, however, having had two of my own children at home and both of my grandsons were born at home. Countries such as the Netherlands that have home birth integrated into their maternity system have much better birth outcomes than we do in this country.

While I still love being a midwife, I am increasingly bothered by how birth is "managed" in the United States. Despite spending more money on health care than any other country than any other country in the world, we rank 33rd in infant mortality among 36 member countries of the Organization for Economic Cooperation and Development—behind countries such as Cuba.

Three birth practices, or interventions, that I have seen increase exponentially over the past 25 years are rates of labor induction, epidural use and caesarean birth.

While evidence supports the benefits to both mom and baby of allowing labor to start naturally, the rate of induction is now over 50 percent, according to an American College of Nurse-Midwives Induction of Labor Fact Sheet. A portion of these inductions are for medical reasons, but some are based on testing that may not be as accurate as we would wish (for example, an ultrasound's estimate of a baby's size). I think we sometimes trust technology too much and trust women's bodies too little.

Because labor is longer and often more painful with induction, it's no surprise that the epidural rate is now at 71 percent, according to Stanford University researchers, who analyzed data from 2009 to 2014 (the study appears online in Anesthesiology).

Please don't misunderstand me; I am not anti-epidural. Every labor experience is different, and sometimes an epidural can be a useful tool to facilitate the process. What concerns me is that women may not be truly making an informed decision about the risks and benefits and may also have the expectation that an epidural will give them a "pain-free" labor and birth. Read more about Natural Pain Relief Methods for Childbirth.

And finally, caesarean birth—the rate increased every year from 1998 until about 5 years ago when it stabilized and currently stands at just under 32 percent. The reasons for this increase are unclear. Are babies getting bigger? Well, yes but only a few ounces bigger in the past 40 years. Are women getting sicker? Well, somewhat—rates of obesity, gestational diabetes (diabetes that occurs during a pregnancy) and high blood pressure are increasing but not enough to explain the increasing cesarean birth rate.

Fear of liability may be a factor, causing providers to intervene with a cesarean birth before there is a problem. Cesarean birth is NOT risk free. Women have, on average, two times as much blood loss, 20 times the rate of post-birth infection and blood clots. Risks of placental problems increase with subsequent pregnancies when mothers have given birth by cesarean birth. Babies born by cesarean birth have an increased risk of respiratory issues and unintended prematurity.

Again, don't get me wrong: a cesarean can be a lifesaving operation for both moms and babies. Years ago, I had a family who was insistent that labor be "natural," despite skyrocketing blood pressure and a baby that was showing signs of distress. In frustration, I blurted out, "You know, death is also part of the natural order of things!" Not my finest midwife moment, but it got my point across and both mom and baby were fine after an uneventful cesarean birth.

The World Health Organization set a goal of a 15 percent cesarean section rate for developed countries such as the United States. I would also suggest we make birth "kinder and gentler" for both moms and babies born by cesarean, by, for example, giving babies skin-to-skin time with moms immediately or very shortly after birth.

Ruth Zielinski, PhD, CNM, has been a nurse midwife for 25 years. She worked in a full scope midwifery practice, which included care of women throughout the lifespan as well as during pregnancy and birth. Dr. Zielinski is a clinical associate professor at University of Michigan School of Nursing and the midwifery graduate program director. She is continuing her research in women's sexual health, birth, the pelvic floor and women's body image. Dr. Zielinski leads a project conducting doula workshops in South Sudanese refugee settlements in northern Uganda where there are over 1 million refugees living in extreme poverty with high rates of maternal/infant mortality and morbidity. Education is a primary goal in all of Dr. Zielinski's endeavors. Graduate students in midwifery and other disciplines are involved in the work in Uganda, as well as other endeavors in Myanmar, Liberia, Haiti, Mongolia and Kurdistan.

The Truth About Inducing Labor: What Every Pregnant Woman Needs to Know

How Will I Know I'm in Labor?