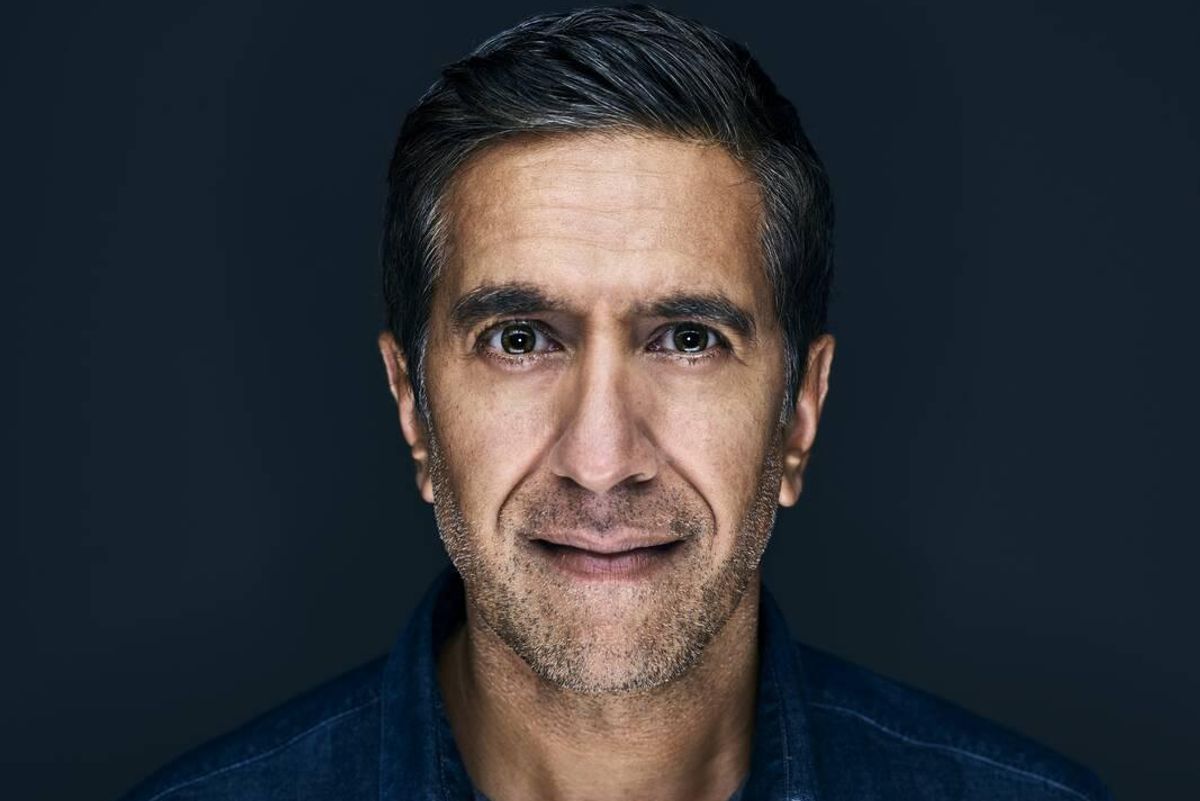 In the second part of our two-part interview, Dr. Sanjay Gupta discusses why you should eat with your nondominant hand, why you should avoid sugar, the importance of connecting with other people, and more

Dr. Sanjay Gupta recently took time out from his hectic schedule to speak with HealthyWomen's editor-in-chief, Jaimie Seaton. An award-winning journalist, CNN's chief medical correspondent, professor of neurosurgery and practicing neurosurgeon, Dr. Gupta discussed his new book, "Keep Sharp: Build a Better Brain at Any Age" with Seaton. The book explains the connection between the brain and overall health; debunks common myths about aging and cognitive decline; discusses the signs and symptoms of brain disease, including Alzheimer's; and offers a detailed 12-week program to strengthen brain health.

This is the second part of a two-part series. Be sure to read the first part, too.

The transcript has been lightly edited for clarity and length.

HealthyWomen: In the book, you say that experiences drive brain plasticity. Given that lower income people may tend to work more repetitive jobs and have less opportunity to travel and spend leisure time, can you talk about the socioeconomic disparities with brain health?

Dr. Sanjay Gupta: These disparities exist, and I don't think we can deny that. It is harder for people who have repetitive jobs who can't do things that would inspire this neurogenesis [the growth of new brain cells] that I'm talking about. The only thing I would say is that when we looked at the sorts of things, both in the United States and around the world, that really seemed to be associated with neurogenesis, it wasn't necessarily things that were expensive or even required lots of time. A very prominent neuroscientist and I had a long discussion about various evidence-driven ways to increase neurogenesis.

For example, simply eating with your nondominant hand. So when you eat with your nondominant hand, that may sound like a pretty simple thing to do, but we forget how orchestrated it is to actually eat — to hold a fork a certain way, to cut with a knife a certain way, to then bring the food to your mouth, how you flex your elbow, the angle of your wrist. You just do it — because you've been trained to do it with your right hand if you're right-handed.

But if you just flipped everything around and started doing that all with your left hand, that is an example of something that inspires neurogenesis that doesn't require time — you're already eating, obviously. So there are different ways to think about this.

I think if you have the ability to pursue any kind of new activity, the biggest bang for the buck seems to come in pursuing new activities in which you also use your hands. So painting, pottery, anything like that seems to be better in terms of creating neurogenesis than things that don't necessarily require any kind of tactile function. It's easier than it may seem to actually inspire neurogenesis.

HealthyWomen: As you point out in the book, healthcare providers don't always discuss things like nutrition, exercise or the need for sleep with their patients. Since all of these play such an important role in brain health, do you think the medical profession should, and will in the future, play a bigger role in educating patients about brain health, even allowing for the fact, as you mentioned in the book, that there's no consensus about the right diet among the medical community?

Dr. Sanjay Gupta: I think the medical profession will — and already are to some extent — educating people about brain health. The medical community, like the rest of society really, has long thought of the brain as this black box that you just got what you got. And maybe what was good for the heart was also good for the brain, but that was basically it. There's real science that has come out — and we have evidence now — of this idea of being able to stave off some of these brain-related diseases and in some cases, maybe even show evidence of reversing it. There are certain things that doctors have been educating their patients about for some time, but to have the data, I think makes a difference because you can start to shape somebody's way of life. There is a perfect way of living for an individual.

The consensus about diet is interesting because your perfect diet may be different from my perfect diet. But, there are some universally good foods — foods that are anti-inflammatory that cross the blood-brain barrier. We know there are also some universally bad things. The brain is exquisitely sensitive to too much sugar. We know too much sugar is bad, but the brain actually is really so sensitive to it that it essentially shuts down absorption if you overflow it with sugar. And so you could be starving the brain while at the same time eating way too many calories. It's an ironic sort of thing about the brain. So there are some universal truths, but I think overall, there's going to be significantly more leaning in toward educating people about these basic lifestyle things that are specific to them.

HealthyWomen: Can you talk about the lasting effects of social isolation on all generations? As you stated in the book and is widely known, we're now more connected yet more isolated than ever.

Dr. Sanjay Gupta: I spoke to all these neuroscientists about neurogenesis and brain health and without fail, all of them come back to this idea that loneliness — and they use the term specifically — is so problematic. They have all this data now on how toxic loneliness can be, what areas of the brain are affected when someone is feeling loneliness. Some of the same areas of the brain that are responsible for physical pain light up with loneliness. And from an evolutionary standpoint, [if someone was] isolated from the tribe, they were less likely to survive as a result. But it is also important to point out that it was really people's perceptions of loneliness more than anything else, meaning that you could be in a very crowded situation and still feel incredibly lonely, and vice versa, where you didn't have to be around many people at all and have incredible feelings of connection.

So isolation and loneliness are not necessarily the same thing. But having said that, there's no question that connection is protection, and there's a physiological basis to that. We release these hormones such as oxytocin in response to connection, and oxytocin is a very protective hormone. It helps decrease the surges of the stress hormones and kids need it for brain development. So I think the big question, especially during Covid times, is "Can you still continue to have that connection while we are mostly at home and isolated?" And again, we don't know the answer to this. You go back and look at the data from the flu pandemic of 1918, and there was a rapid return to normalcy. The Roaring '20s followed the 1918, 1919 flu pandemic. So there was this rapid return to connection and people said, "Oh, we won't shake hands again." People were shaking hands and hugging almost immediately. We know the toxic effects, but we also know how quickly people can return to that connection.

HealthyWomen: In the book, you talk a lot about the connection between obesity or weight and brain health and also the negative effects of stress on the brain. Do you think one lasting effect of Covid-19 may be an increase in dementia and Alzheimer's, given the stress of the pandemic and then also the fact that a lot of people have turned to comfort food as a coping mechanism over the last year?

Dr. Sanjay Gupta: There are two things here. One is the overall lifestyle changes that we know are associated with an increased likelihood of dementia, such as the ones that you mentioned, and whether those go up and stay up because of what's happening with Covid-19. There have been all sorts of different behavioral changes. People have, in some places, become more likely to drink, more likely to eat. But there have been places where people have become much more physically fit and much more meditative as well. They call it the hunk, the monk, the drunk, and the chunk.

The second part is, Covid-19, this coronavirus, does something to the brain. And it is kind of a remarkable thing to think about how a respiratory virus has this sort of impact on the brain. Other viruses have as well. Even after people develop a bad flu, they may have significant brain fog or things like that for a while after they recover.

With this coronavirus, it seems to last a really long time. A study came out that said at least a third of people who even had mild symptoms have up to nine months of persistent symptoms afterward, and there is a real concern that some of that may be creating a path to dementia later on in life. So I always tell people, "You do not want this infection, no matter what." People are like, "I'm young, I'm healthy, I'll power through it." You don't want this because we don't know what the long-standing ramifications are in the brain. What we do know is that inflammation seems to be a precursor to many of the neurodegenerative things that we talk about, including dementia, and that this virus causes inflammation at the base of the brain, and that inflammation might be creating a pathway for dementia later on. So I am worried about the long-standing effects of this, because of lifestyle but also because of this real, tangible inflammation link.

HealthyWomen: So my last question is actually more for me. Does it matter that I listened to your book? Is it better for brain health to physically read a book?

Dr. Sanjay Gupta: It's interesting. It really doesn't seem to matter that much. This is an issue that came up a few years ago. There's this area of the brain that is specifically responsible for you reading words, for you actually to look at written language and absorb it. But when you look at the overall impact on what areas of the brain are lighting up with reading versus hearing, it really doesn't seem to make a big difference. It's hard to say they're absolutely equally beneficial, but there seems to be no significant differences. So if listening is the way you absorb it, then that's the way to do it.

For Further Reading
Alzheimer's Isn't Inevitable
Does Forgetting a Name or Word Mean That I Have Dementia?
Racism Linked To Cognitive Decline in African American Women
Retiring Early Can Be Bad for the Brain