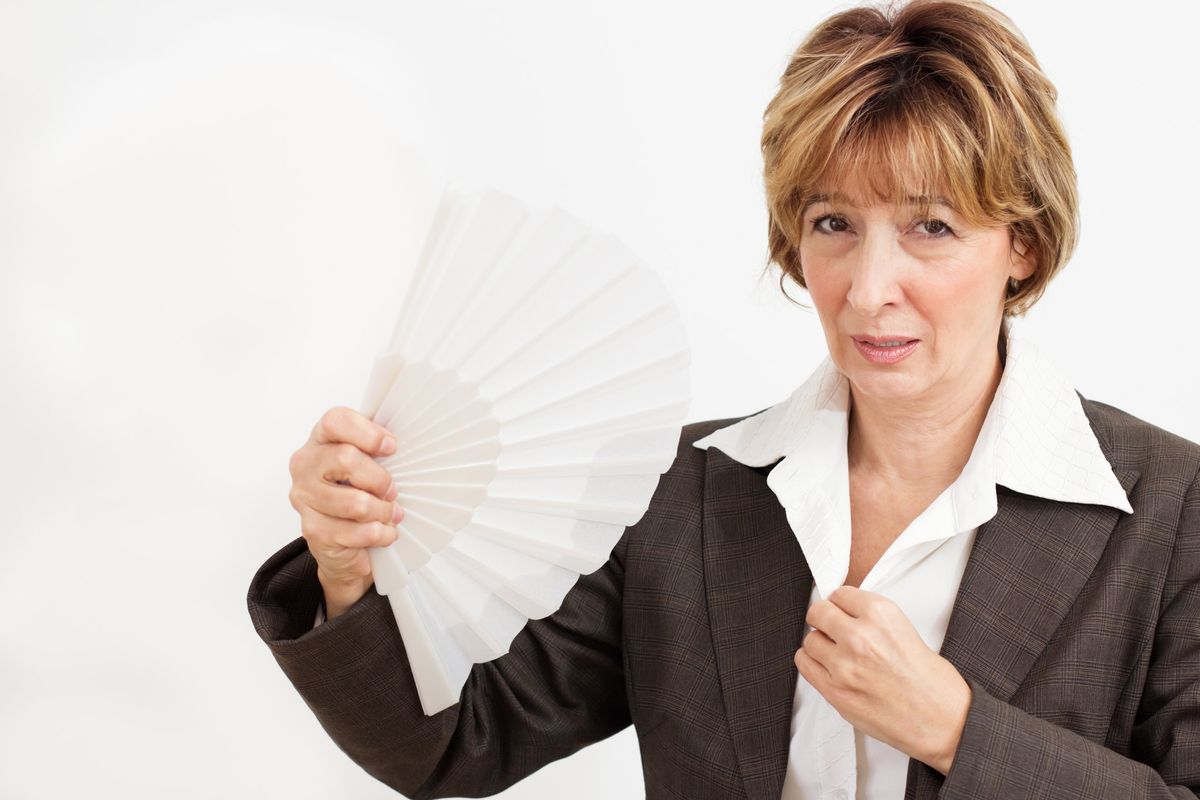 Hot Flashes Getting You Down? Here's a Reason to Feel Up

I get emails about a lot of health issues. The most common ones concern age-related weight gain. Second to those are the emails about hot flashes. Yes, soon enough we're all in this together. We all get one, or both. Rare is the mid-aged woman who escapes their grip.

This article has been archived. We will no longer be updating it. For our most up-to-date information, please visit our menopause hub here.

I get emails about a lot of health issues. The most common ones concern age-related weight gain. Second to those are the emails about hot flashes. Yes, soon enough we're all in this together. We all get one, or both. Rare is the mid-aged woman who escapes their grip.

It's different for everyone, of course. My sister swears she got nary a hot flash when she went through menopause. Not a single one. Too bad that wasn't genetic: I, who was always freezing, was suddenly hot, even on winter's most frigid days. Coat? Who needed a coat? I packed away every single sweater I owned (with the exception of a couple of cotton cardigans that I could easily put on and pull off). And I got myself one of those lacy, colorful fans that you're used to associating with Spanish Flamenco dancers.

I was hardly alone; in fact, I was in the company of about 85% other women who experience hot flashes as they approach menopause and for up to a year or two after their periods stop. Here's a surprising fact: hot flashes can cause your body's temperature to rise by as much as 10 degrees. It's only now – 3 years after passing through menopause – that my heavy sweaters are making a comeback, albeit very slowly. My personal thermostat is beginning to right itself.

But now there's news that might make you feel grateful for those hot flashes. Researchers at Fred Hutchinson Cancer Research Center have found that women who have experienced hot flashes – and other symptoms of menopause – may have a 50 percent lower risk of developing the most common forms of breast cancer than postmenopausal women who have never had such symptoms.

According to the study's senior author, the greater the number and severity of these symptoms, the greater the protective effect appeared. He states, "In particular, we found that women who experienced more intense hot flushes – the kind that woke them up at night – had a particularly low risk of breast cancer."

The hypothesis behind this is that hot flashes and night sweats cause hormone levels to fluctuate and drop, thus decreasing estrogen levels.

Knowing the triggers – and thus avoiding them as much as possible – helps make the hot flashes less frequent and/or severe. The biggest trigger I found was stress. Any time I began to feel the least bit of it – there it was – that intense heat that made me feel as though my entire body was bound tightly in a heating pad turned onto its highest setting. Other triggers include:

So, let me ask those of you of the hot-flash variety: does the news that having hot flashes decreases your risk of breast cancer make you happy? Does it help you cope just a wee bit better with wet sheets and sweaty shirts?

I hope so. But if not, those lacy fans are relatively inexpensive.

And they make you look quite exotic, too.

You may also want to read:
From the NYTimes: Antidepressant May Help Quench Hot Flashes

From our archives: Could It Be Menopause?
Managing Menopause Symptoms