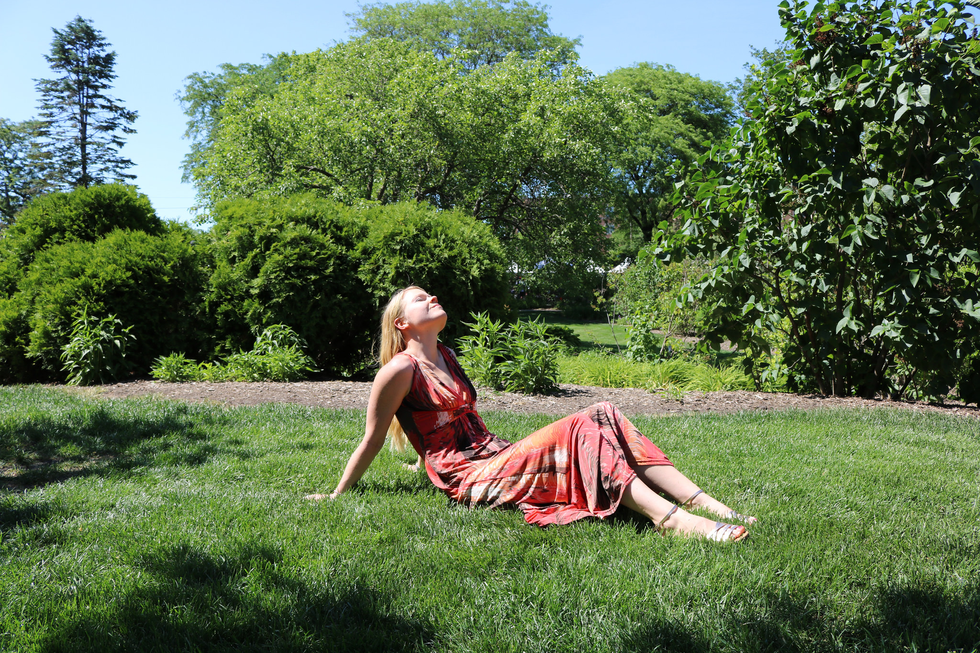 What I Want You to Know About Living with Endometriosis

What I Want You to Know About Living with Endometriosis

I looked perfectly healthy on the outside and I was always ready with a fake smile. Inside, all I felt was despair swallowing me whole.

"Have you tried pain medication?"

"You should just have a kid!"

"Just hold out for menopause."

My first period came in a whirlwind in the 5th grade. I woke up one morning vomiting, dizzy, and with a fever. I thought I had the flu, but it turns out I had just met Aunt Flo. Luckily enough, I was home when it happened. Even though I knew what a period was I had no idea it would be like this!

The symptoms in subsequent periods unfortunately weren't much better. Each year my periods got worse and worse. I was sucking down over-the-counter pain medication just to keep the pain at bay with little thought to how much it was damaging my gut. I just wanted the pain to stop so I could think clearly and get up from the fetal position on my bathroom floor.

I tried birth control to help control the pain in high school, but I vomited so much from it I bruised two of my ribs. I felt like the girl from the Exorcist. I was traumatized and didn't try it again until college. When I tried it again in college, I became extremely nauseated during a play in which I was performing. Every time I was off-stage, I ran to the bathroom to vomit and get back on stage for my cues. As they say, "The show must go on."

Every time I went to the OBGYN about my debilitating period pain, they just said that happens and shrugged. Sadly, this is all too common for those diagnosed with endometriosis. I knew what endometriosis was because a friend of mine in high school had it, but no one had ever uttered the possibility that I could have it until I was 26-years-old.

I experienced pelvic and abdominal pain constantly, not just during my period. But it wasn't until I started bleeding after intercourse that I decided I really needed to get it checked out.

I went to go see my regular OBGYN and she did an ultrasound where she saw a cyst had burst. That's most likely what caused the bleeding, but while she was in there, she noticed a vascularity to my uterus and asked me how my periods were. She explained I was a prime candidate for having endometriosis. She had me start on birth control to see if that would work to limit my pelvic pain.

I left the appointment feeling gutted. My health just seemed to take one hit after another and I felt like all the oxygen had been sucked out of the world as I made my way back to my car. I called my boyfriend and explained what had happened while I tried fighting back tears. He said we could get through anything together. He's always been my greatest rock.

When I got home, I started doing as much research as I could about endometriosis and the different treatments available. The information was contradictory, confusing, and it took me a long time to parse out the truth from the misconceptions.

I also sought out a specialist when I found out that I might have endometriosis. If I did have it, I wanted to make sure I was seeing the most knowledgeable health care professional I could find. After doing my own research and getting recommendations from other women in various online support groups, I found a health care provider I liked.

Up to my appointment with my specialist, I was in so much pain I could barely sit up. I was taking an opioid just to get to work every day and keep my health insurance. My body felt like a prison that I couldn't escape and, as guilty as I felt, I hated my body. I felt betrayed. I also felt an extreme amount of jealousy as I watched everyone I know continue on with their life while I retreated to my bed each day after work.

I looked perfectly healthy on the outside and I was always ready with a fake smile. Inside, all I felt was despair swallowing me whole. The place where your mind goes when you can't escape your pain is terrifying.

The specialist saw how much pain I was in and we decided surgery was the best option for me. I ended up getting my first laparoscopy on my birthday. He did find endometriosis along with two cysts and one fibroid. He removed it all. I wasn't crazy and my painful periods were NOT just normal. During the surgery, they also placed an IUD to try and help control my periods in hopes that my body would deal better with it than oral versions.

In order to keep inflammation low, I was already eating gluten-, soy-, and dairy-free, before the surgery. I continued with this diet. Between that, the surgery, and pelvic physical therapy, my periods finally started to get more tolerable. I remember one month where I would take a normal amount of OTC pain medication and all my pain was actually gone. It was the first glimmer of hope I had in a long time.

My endometriosis has allowed me to be a voice and an advocate. During all my research, I found communities of women that no one would choose to be in. It is full of women who feel forgotten, hopeless and small. These groups consist of women who are doing everything they can just to make it to the end of the day. These women deserve our time and research to help them have quality of life.

Women with endometriosis are truly warriors and inspire me every day to fight for them and myself. These women are your coworkers, your sisters, your wives and your mothers. When you fight for endometriosis, you are fighting for all the women that you know because it can happen to anyone. One in 10 woman are affected by endometriosis. This shouldn't just be our fight. It should be everyone's.

If you know someone with endometriosis, please be patient with us. We want to do everything you can, but sometimes we just don't have anything left to give and the world just feels too heavy. There is currently no cure and we are just trying to exist with as little pain as possible.

If you have extremely painful periods, problems getting pregnant, pain during intercourse, pelvic pain or any other symptoms that point towards endometriosis, please go see your health care provider and voice your concerns. That pain is NOT normal and you don't have to live with it. You are not alone!