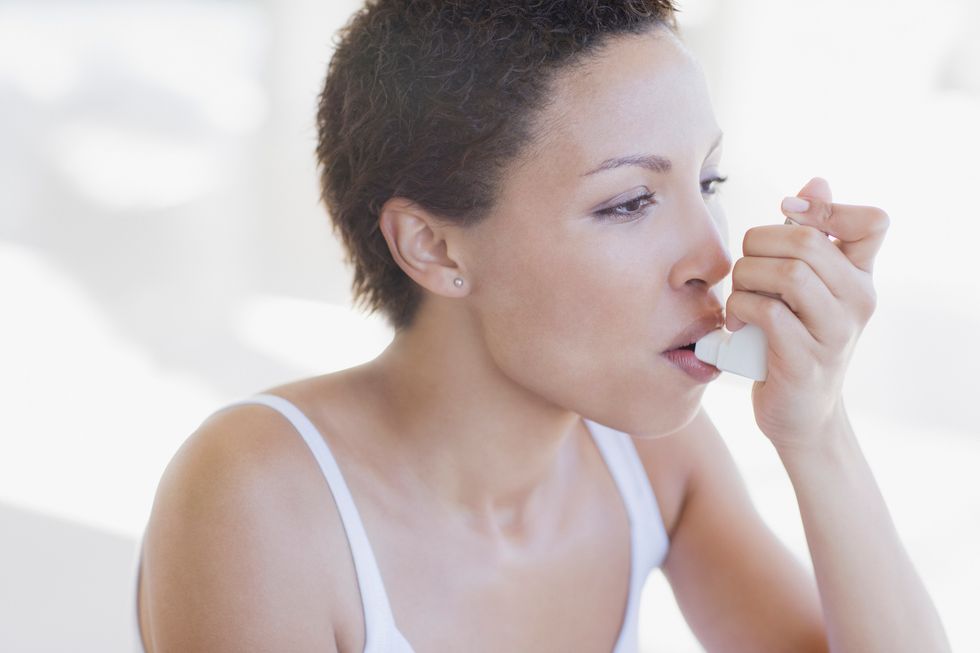 Asthma can develop for the first time in midlife. Triggers that might never have bothered you before can now be a problem, and the symptoms can be more serious for adults.

There are many health conditions that are usually diagnosed in younger women, but if you think you're out of the woods because you've made it this far without having asthma, sorry, you're not. Asthma can strike at any age.

Many people wrongly think that asthma is a childhood condition, and if they've not had it before, they won't develop it in midlife.

It's true that many kids get asthma that continues throughout their lives. But it can also develop for the first time in midlife. There are currently more than 25 million American adults with the condition.

In fact, there's research suggesting that asthma rates are climbing for older adults. Known as adult-onset asthma, triggers that might never have bothered you before can now be a problem. The proof is in the numbers: Forty percent of people with asthma had their first attack after age 40, reports the Center for Managing Chronic Disease at the University of Michigan.

It's vital to know if you have this condition, because older adults have the highest mortality when it comes to asthma. Yet, many times it's tougher to diagnose, because asthma symptoms can mimic other conditions, like reflux, congestive heart failure or bronchitis. Symptoms include:

It happened to me about 10 years ago. I was in a new-to-me dance studio. I had signed up for a series of ballet lessons and, admittedly, I was a bit nervous because I hadn't done ballet since I was a young teenager. When I started feeling shortness of breath during the class, and later, began coughing in a way unfamiliar to me, I chalked it up to stress. Or maybe, I thought, the room was dusty and somehow it was irritating my lungs.

But I was concerned enough to mention it to my doctor, who, after a few questions, had a hunch. It might be something I'd never even known existed: exercise-induced asthma. A subsequent visit to an allergist confirmed it, and I was prescribed an inhaler to use before exercise.

These are the hallmarks of asthma, when your airways narrow and swell and generate extra mucous. What makes one person develop asthma while another won't is not entirely clear, but it's thought to be a combination of environmental and genetic factors.

When asthma strikes at a later age, the symptoms are similar to anyone else's. But there are a few differences: Asthma in an older person can be much more serious because it can lead to respiratory failure, even during mild episodes. And, speaking of episodes, when you're older, your difficulty with breathing—even with mild symptoms—can be on par with what a younger person experiences during a severe episode.

Asthma is diagnosed in a variety of ways: by physical exam, a lung function test and sometimes a chest or sinus x-ray. The sooner you're diagnosed, the better, because early intervention and treatment can help prevent asthma from progressing, say experts.

Knowing what's triggering your asthma is the key to living with and managing it.

So, if you do have asthma, what should you do?

For one, it's important to know your triggers. There are things, like dust, pollen, cigarette smoke, and even stress, that can induce an asthma attack. And since about 30 percent of adult asthma is triggered by allergies, it's important to get screened for allergies so you can be well informed and know what to try to eliminate or at the very least, steer clear of.

Managing your asthma is not as simple as reaching for an inhaler or other medication once the symptoms surface. It's important to be proactive with long-term medications that can help reduce lung inflammation and mucus production.

And, of course, like many other conditions, having healthy habits goes a long way toward managing that condition—or avoiding it in the first place. Obesity makes it much tougher to control your asthma, as does smoking. If you have asthma and quit smoking, you can (contrary to what you may think) reverse some of the lung damage that makes breathing difficult.

I'm fortunate that I haven't experienced another episode like the one I did 10 years ago in that dance studio. So far, so good. But since I know that asthma can reappear at any time, it's good to be alert to its symptoms and triggers and take the necessary steps (not necessarily ballet steps) to avoid them.