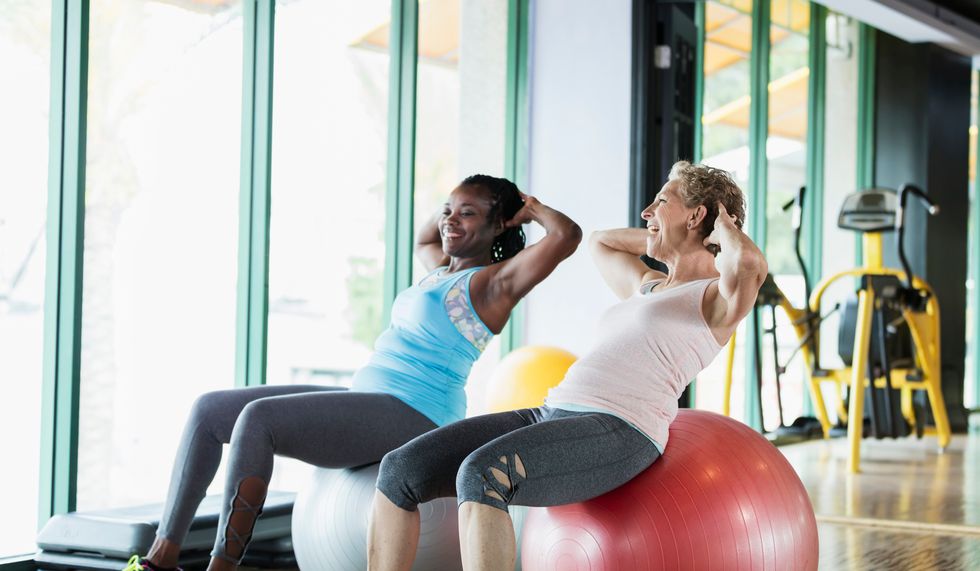 What You Need to Know to Prepare for Menopause

The menopause transition begins way before you know it—usually in your 40s. That's the time to begin prepping for what's to come.

You've likely heard the stories. Some horrific ones, other not-so-bad ones. Like the woman who stripped down to her bra when she was engulfed in flames (er, hot flashes). Or the woman who woke up one morning and—voila!—her period was gone for good, never to return again.

And then, there's the in-between: the truth.

Menopause can be a challenging time, and your body, in dealing with roller-coaster levels of estrogen and progesterone in preparation for its final farewell to Aunt Flo, is busy prepping behind the scenes, usually for years before you can finally toss your tampons. Brain fog. Insomnia. Crazy-making mood swings and then some.

Or all of the above. But whatever comes your way, you can, at the very least, be prepared. Here's how.

Symptoms of menopause actually begin years before you're officially in menopause. Menopause is defined as when you've been without a menstrual period for 12 consecutive months. If you skip say, seven straight months, and then get your period the eighth month, you have to start counting to 12 all over again. The time period before menopause is called perimenopause.

Perimenopause, on average, lasts for about four years. But it's different for every woman, which is why some women may experience it only for a few months, while others will live with it for 10 years.

Aging ovaries equal less efficient ovaries, and they stop releasing an egg each month as they've done since you began menstruating. With this comes hormonal imbalances, hence the varied symptoms—you might get one or a few or none at all.

The hallmark signs of the menopausal transition are hot flashes, which affect as many as 75 percent of women during this time, and a change in periods. Periods may be closer together, farther apart, heavier, lighter, longer or shorter. You can plan on some version of unpredictable for some period of time.

Read more about What Every Woman Should Know About Menopause.

Prepare now. Your body will thank you later.

Granted, it can be a winding, uneven and confusing road to menopause, but that doesn't mean you have to stand idly by and endure the bumpy ride. Knowing that menopause is normal and natural can give you assurance that it is equally survivable.

"It's important to educate yourself before menopause happens," says Lauren Steicher, MD, clinical professor of obstetrics and gynecology at the Feinberg School of Medicine at Northwestern University in Chicago, Illinois, and medical director of the Northwestern Medicine Center for Sexual Medicine and Menopause. Good health habits won't totally eliminate your symptoms, but at least once your symptoms begin, you'll be able to tackle them from the best possible place, she notes.

You've heard it before: it's never too early to start taking care of your body. But you've been feeling too invincible—and young—to pay much attention. Trust us, you should. Because once menopause hits, your body doesn't bounce back the way it used to. So, seize the moment and do this now (and your body will thank you later).

Take care of your bones

Bone density begins a steep and rapid decline after menopause because of the loss of bone-protective estrogen. Rates of bone loss are highest at the time of menopause, with an average annual loss of about 2 percent beginning 1 to 3 years before menopause and lasting 5 to 10 years. Across the menopause transition, women experience an average loss of 10 to 12 percent (about one T-score) in the spine and hip. Thereafter, rates of bone loss fall to about 0.5 percent per year. By the time a woman is aged 80 years, she has lost, on average, approximately 30 percent of her peak bone mass, and the average T-score in the hip at that age is about −2.5.

But the good news is that the greater your bone density is to begin with, the lower your risk is of developing osteoporosis.

Keep your bones strong by incorporating weight and strength training into your exercise routine, which should also include high-impact and low-impact exercises (like jogging/running or fast walking), stair-climbing, dancing, yoga and Pilates.

Make sure to get enough calcium—800 to 1,500 milligrams each day, say experts at Harvard Medical School. The best sources are whole foods like dark leafty vegetables, dairy products, sardines, salmon and legumes. And make sure to get enough vitamin D, which helps your body absorb enough calcium. Most recommendations are for a daily vitamin D3 supplement of 1,000 IUs.

Though more research is needed, being overweight may be associated with worse hot flashes.

What is known is this: As menopause approaches, your metabolism slows, making weight gain more probable and weight loss more challenging. That's why it's important to maintain a healthy weight (this also helps protect your bones, because cycling between pounds can put added stress on them). Now's a great time to get into the habit of eating a healthy, balanced diet full of vegetables, fruits and whole grains. And since added sugars in the typical American diet can add an unneeded 300 calories a day, avoid sugar-sweetened beverages and sweetened coffee and tea. Limiting alcoholic beverages can also cut extra calories from your diet.

If you've never done it before, now's a good time to start. If you already do it, keep it up! Exercise's benefits to your present and future health can't be overstated. It helps to keep your weight under control, as well as your stress. It can contribute to better sleep, less depression, stronger bones and greater muscle mass (which helps burn more calories). Exercise can also reduce the risk of cancer and other diseases, including breast, colon and endometrial cancers; heart disease; and type 2 diabetes (the risk for which typically rises with age). Another bonus: Exercise has been shown to help with memory and cognition, which, during menopause, briefly suffer, turning into "brain fog." (They return to normal once your hormones settle down.)

Urinary incontinence—the sudden and frequent urge to urinate (along with the occasional leakage of urine)—can become common during perimenopause for some women and can get progressively worse as changes in the vaginal tissue, urethra and pelvic floor occur. Getting into the habit of doing Kegel exercises now can keep your pelvic floor muscles strong later. (The added benefit is this can also benefit your sexual function.)

Brush up your sleep hygiene

One way to sidestep sleep disturbances—an all-too-common woe of menopause—is by learning the best ways to sleep. Your future rest depends on it. Cut off caffeine by midafternoon. Wind down before bed with a relaxing routine, and keep your bedroom cool (experts say 60 to 67 degrees Fahrenheit is best), dark and quiet. Eliminate all sources of electronic light, like TVs, tablets, laptops and smartphones at least a half hour before turning in, because they can increase your alertness and suppress the release of melatonin (the sleep-inducing hormone). And although you may be tempted to use alcohol for its sleep-inducing effects, steer clear: while it can help you fall asleep faster, it will come back to haunt you and cause frequent wakings later in the night. Learn more about how Menopausal Night Sweats Can Lead to Impaired Thinking.

Learn to cope with stress

Chronic stress is bad for your health, increasing your risk for high blood pressure and heart disease and other physical problems, which tend to increase after menopause. You'll need solid skills to deal with what's to come—the mood swings, hot flashes and insomnia of menopause can take their toll on the most even-tempered of us. Add to that the demands of children, aging parents, job responsibilities—in short, LIFE—and stress can strike in a big way. Exercising, meditating, eating well and reaching out to friends and loved ones can put you in the good habit of knowing what it takes to tackle life at its most stressful.

Take care of your heart

"Research shows that to ensure a healthy heart after menopause, you have to begin controlling whatever risk factors you can before menopause," writes Dr. Nieca Goldberg in her book, Complete Guide to Women's Health. "The cardiovascular problems that may surface during menopause have been developing for decades," she writes.

A healthy diet and regular exercise, as well as controlling your stress and weight and not smoking go a long way toward a healthy heart (and there's no time like the present).

This resource was created with support from Pfizer.