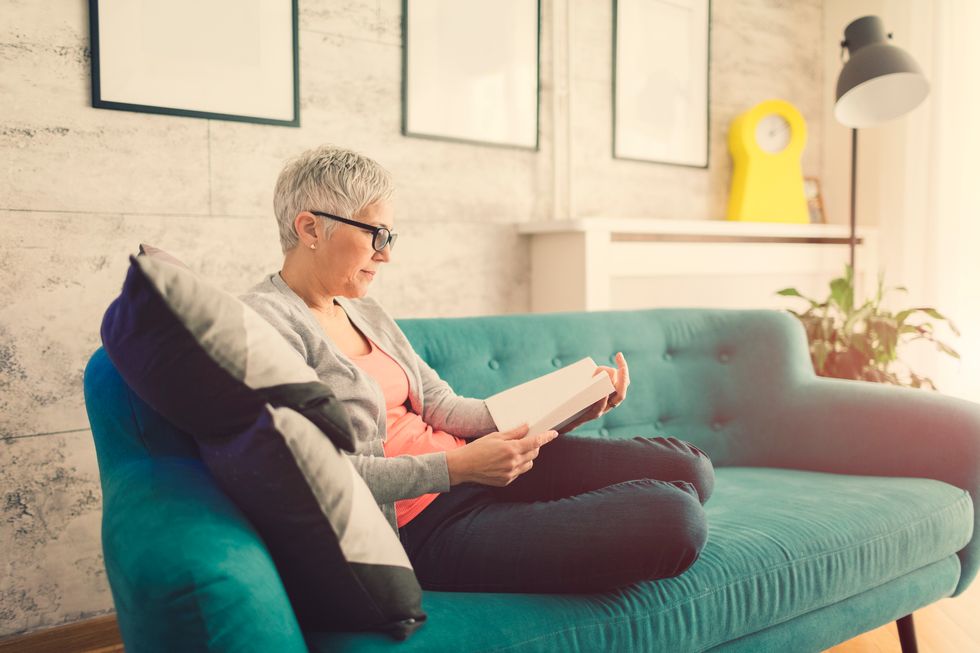 Sneak Peek: Can You See Us Now? A Novel for GrownUps

Sneak Peek: Can You See Us Now? A Novel for GrownUps

Finally, a novel that celebrates women over 50!

For every woman who has ever felt invisible, here's a grownup novel. "Can You See Us Now?" tells the story of three best friends who rebel against unsolicited AARP cards, hot flashes, bosses, becoming invisible, and the perceptions of what's old.

Here is sneak peek at the first chapter.

It felt great being inside the air-conditioned bar at Balthazar. Suzy was glad she had arrived early and grabbed three stools at the end of the bar. She hated these damned hot and humid days. And throw in the hot flashes and it made a bad day worse. At least she could cool down a bit before Madge and Trish arrived. This was their usual martini meet up before their monthly dinner with a group of friends who laughingly call themselves the Ripe Tomatoes.

She ordered a dirty martini from the very cute bartender with a crooked smile, perfect teeth, and sandy hair with a little stray piece that almost touched his baby blues. Another aspiring actor. Damn, he looks so young. But then so do the cops and firefighters these days. Not to mention everyone in the ad agency she works for, Secret Agent. The name alone tells you it's another "trendy" agency where anyone over forty starts to feel like a dinosaur.

She was looking forward to shedding her bad day with her two best pals. They'd all been friends since their first jobs with a big New York City ad agency right out of college, and there wasn't much they didn't know about each other or hadn't shared about their lives. They still laugh about their first apartment, a one-bedroom with twin beds and a pullout couch. Whichever one arrived home the latest got the couch. They had started their martini meet up tradition back then because it seemed like such a "grownup" drink.

Suzy had stayed in the advertising business, although she was having regrets about that now. Madge had gone into TV journalism, another cutthroat industry, and Trish had married a wealthy hedge fund guy and had the luxury of owning an art gallery, mostly for the fun of it.

They had been bridesmaids at each other's weddings. Suzy was the first to get married, and was still with Ken, a corporate attorney. They had two children in quick succession, their daughter, Keri, and son, Ian. After he was born, they moved out of the city to Bronxville. They wanted the kids raised in the suburbs and Bronxville was an easy commute to the city since both she and Ken worked there.

Trish married Michael a couple of years later, and their marriage was still intact too. Trish would have loved to have children, but it wasn't in the cards.

Madge didn't get married until she was almost forty, and the marriage didn't last much longer than the wedding reception. Seems he cheated on their honeymoon!

Now here they were more than twenty-five years later. They still looked damned good — Suzy, with her blonde highlighted hair, was tall and still trim (although lately she felt her middle was expanding). Madge was a dramatic-looking brunette who worked out all the time and had the arms to prove it. Trish was a petite redhead, who was into organic food, and holistic and healthy anything and everything.

Ahh…Sandy Blue Eyes put the martini in front of her. She took the first sip and already felt better. On her second sip, two beautiful models floated in and took seats at the center of the bar. Sandy Blue Eyes made a mad dash to grant them their every wish with his most ingratiating crooked smile.

On her third sip, Madge and Trish saddled up to the bar.

"Hello, darling…it's so fucking hot my panties are melting," Madge said as she air-kissed Suzy.

Trish, looking cool as a cucumber in a little white linen dress with spaghetti straps and four-inch wedge sandals (how did she always look so damn perfect?), sat in between them. "Martinis…just what we need." She gave a little nod in the direction of Sandy Blue Eyes that went unnoticed because he was too busy impressing the models with his mint muddling skills for the mojitos they had ordered.

"Oh, bartender," Madge shouted in her most sultry voice, which also went unnoticed, prompting Madge to get up and interrupt the mint muddling reverie to order the martinis.

"Fuck — we've just become invisible. And how was your day, darlings?" said Madge as the errant martinis made their way to their end of the bar.

Suzy raised her glass to cheer her friends. "Oh, I had another lovely day in ad agency paradise being the oldest person in the conference room, and if that isn't bad enough, I had a hot flash just as I was presenting to the client and then a brain freeze."

"Have you been taking your black cohosh and exercising more?"

"No, Trish, I'm happy I find time to brush my teeth in the morning."

"My day was hell too," said Madge. "The rumor is that the network is thinking of moving me from the morning show to the midday ‘entertainment' spot. Midday, for Christ's sake, who watches the midday news? I know they've got that thirtysomething former beauty queen with a law degree from Harvard already lined up. I think the handwriting is on the wall. You're so lucky you own your own art gallery, Trish, and don't have to worry about being usurped by an overachieving, corporate ladder-climbing charmer who has men drooling on themselves."

"I'm sure it's just this wretched heat getting both of you down," said Trish always the optimist of the trio. "Let's focus on something fun, like planning Suzy's big 5-0 birthday."

"Oh God, do not say that out loud. There is no way I am celebrating this birthday. I've already told Ken and the kids not to plan anything. And I swear I'll kill anyone who tries to come up with a surprise party. I plan to take to my bed that day, eat bonbons, and watch old movies. And do not mention this to the Tomatoes tonight. I just can't deal."

"At least you have a husband and kids. Not that I miss that cheating ex-husband of mine, but dating is so exhausting. And I haven't felt attracted to anyone in so long, my vagina will probably dry up like a prune." And with that Madge downed the entire martini in one gulp.

"Yikes, what's happened to us?" said Trish. "Our girls' nights out used to be fun. We'd flirt with the bartender, drink those drinks like the models are having, and laugh…a lot."

"Well that was before menopause, hot flashes, and unsolicited membership cards from AARP," replied Suzy. "And where the hell is Sandy Blue Eyes with our check?"

Can You See Us Now? Is available on Amazon and other online booksellers and can be ordered by your local bookstore.

About the author: Cheryl Benton, aka the "head tomato" is founder and publisher of The Three Tomatoes, a digital lifestyle media platform for "women who aren't kids." Having lived and worked for many years in New York City, the land of size zero twenty-somethings, she was truly starting to feel like an invisible woman. She created The Three Tomatoes as the antidote for invisibility and sent it to 60 friends. Today she has thousands of friends and is chief cheerleader for smart, savvy women who want to live their lives fully at every age and every stage. She spent her first career in the NYC advertising agency business as a top executive at some of the largest agencies in the world.