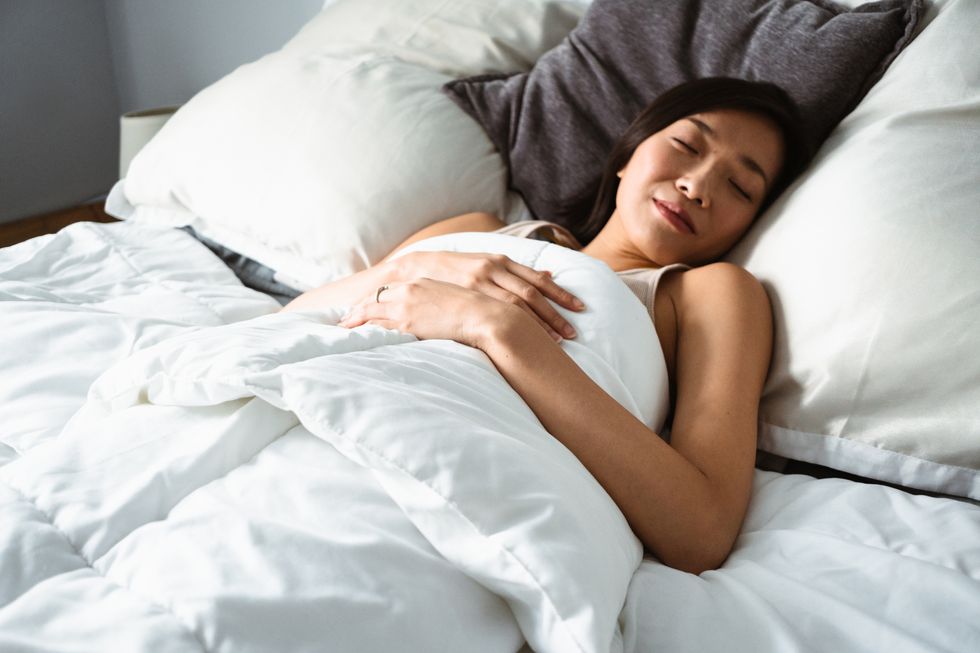 Should You Consider Marijuana for Sleep?

Using a chemical compound of marijuana known as cannabidiol, or CBD, may help some people who have difficulty sleeping, but more research is needed.

If you're reading this through bleary eyes, you might be one of the 70 million people in the U.S. suffering from insufficient sleep or some other type of sleep disorder.

And it's more than likely you've tried many ways to get a good night's sleep.

Have you ever considered cannabis (aka marijuana)?

We're not talking about smoking weed and getting high in order to sleep (although it has been used medicinally for centuries as a sleep aid and for reducing nausea). Instead, we're suggesting using one of its many chemical compounds—this one known as cannabidiol (or CBD)—that has calming, antianxiety and antipsychotic effects, all without the "high" associated with cannabis.

CBD has been recognized to also naturally treat many chronic health conditions, due to its anti-inflammatory, antioxidant, anticonvulsant and antidepressant properties.

Considering that marijuana is recognized by many for its medicinal properties and is now legal for medicinal and recreational use in many states, it's hardly surprising that one of the most active ingredients in medical cannabis—CBD—has taken on a new role.

"CBD is all the rage," says neuroscientist Jodi Gilman, PhD, an associate professor at Harvard Medical School who researches the effects of cannabis on the brain. "I think it's safe—but I have no idea if it's effective (no one does). There just haven't been many published studies on CBD for sleep. People definitely believe in it, but it's still not proven if it's a real deal or a placebo effect."

A 2017 study published in the journal Nature and Science of Sleep concurs that while CBD is promising for sleep promotion there are still many unknowns.

Read more about What Is CBD Oil and Is It Effective?

Yet, many people are turning to CBD to help them sleep. Sleep deprivation not only affects your mental and emotional state, it takes its toll on your body, too. Do you feel moody, anxious, irritable, distracted, forgetful and moody after a bad night's sleep, and maybe even depressed and unmotivated, too? Studies have proven that and more.

A lack of sleep can also increase your risk for high blood pressure, obesity, diabetes and even heart attack.

CBD is either extracted from the cannabis plant or manufactured synthetically. Both forms are found in supplements and medications developed to utilize its therapeutic properties, explains noted sleep expert Michael J. Breus, PhD (aka The Sleep Doctor).

"We know that CBD interacts with many different receptors, proteins and other chemicals in the brain," he explains, and it's through these interactions that CBD appears to have the ability to affect many of the body's functions including the sleep-wake cycle. The human body actually produces its own cannabinoids, and CBD might work by directing the body to use more of its own.

With its ability to reduce anxiety, CBD can help reduce sleep difficulties and improve sleep quality, notes Breus. He also points out that, according to research, CBD may increase overall sleep amounts and improve insomnia (it's been shown to reduce insomnia in people who suffer from chronic pain).

CBD, in smaller doses, stimulates alertness and reduces daytime drowsiness. And in people with Parkinson's disease, it may help improve sleep quality as well as help with a sleep disorder known as REM behavior disorder, which causes them to act out physically during the night while they are dreaming or in REM sleep.

CBD may be legal in states where medical marijuana is not, and some states have laws specific to CBD, which you can see here.

Although small studies have found that CBD is tolerated well by most adults, and researchers haven't discovered any significant side effects, it's important to talk with your health care professional before considering using CBD for sleep, especially since it might interact with some supplements and medications. Some possible side effects include dry mouth, lightheadedness, sleepiness, sluggish movement and/or thought and low blood pressure.

In the meantime, it's important to also remember the tried and true approaches to getting a good night's sleep: limit daytime naps to 30 minutes; keep your bedroom cool, dark and quiet; avoid stimulants like alcohol and caffeine too close to bedtime; use relaxation techniques like meditation and progressive relaxation; and shut off all electronics at least one-half hour before turning in.

And don't forget to also shut off all your racing thoughts, too—like whether or not you should consider CBD for sleep. That dilemma can wait until the morning.