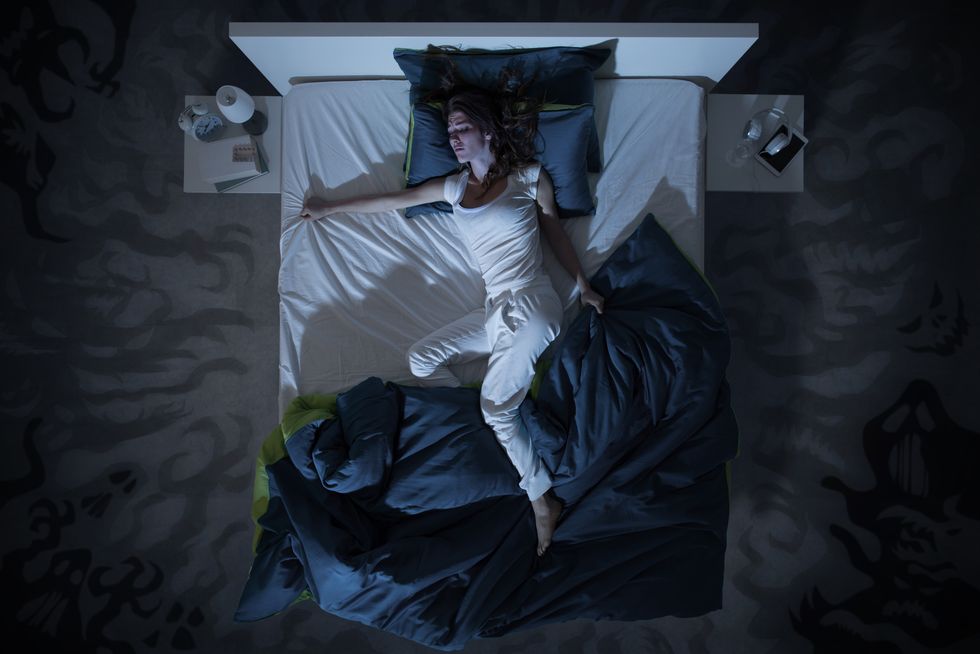 Why Are You Tossing and Turning at Night?

Our expert gives you some solutions for better rest.

There's a famous story in my family of my grandmother and I sleeping together when I was about five, and her waking up with my feet in her face. My grandmother, who was very proper, used to laugh when she told people about my notorious tossing and turning, and the various positions I'd end up in.

I thought of the story when my own children were young, and I'd find them in their cribs or beds at the opposite end of where I put them to sleep — usually with the covers twisted around their legs. They obviously inherited my childhood habit of moving while sleeping.

The truth is, I never grew out of it and neither did they. I still find my teenage son in bed with the covers weaving through his tall body or on the floor completely. My tossing and turning wakes me up, and I spend hours every night watching TV or staring at the ceiling in an effort to get back to sleep.

When I reached out to Dr. Katherine M Sharkey, associate professor of medicine, psychiatry and human behavior at Brown University, to get some insight into my family's sleep habits, she said it's not abnormal to move during sleep, especially for children.

It's possible to move about and not have sleep issues, but there are also sleep disorders associated with nighttime movement, including insomnia.

One study found that 25% of Americans experience bouts of insomnia each year, but it does not become a long-term problem for 75% of them.

"There are people who have trouble falling asleep and there's sleep maintenance insomnia," Sharkey said, "where people fall asleep OK, but then throughout the night, they might get an hour of sleep but pop back awake."

Some of the reasons people have trouble settling at the beginning of the night are anxiety, having trouble shutting their mind off, or a circadian delay — trying to go to bed too early for their biological clock.

How to combat insomnia

When I wake in the middle of the night, I usually give myself a few minutes to fall back to sleep and if I'm unsuccessful, I turn on the television. That usually wakes me up even more and I find myself watching old episodes of "Law & Order" or "Friends" for hours. This obviously isn't a very good approach because I'm tired the next day.

I suspected that I've been training myself to wake up every night, and Sharkey confirmed my suspicion. She explained that one of the first things she teaches patients who wake up and can't fall back to sleep is to get up and do something else until they feel sleepy again.

"We don't actually want people 'tossing and turning' because that says they're not able to settle back down, so the strategy should be to break the cycle by not staying in bed while you're wide awake," Sharkey said.

The first line of treatment for insomnia should be cognitive behavioral therapy, Sharkey said, explaining that getting up to do something else falls under the behavior part. Another behavior is not spending too much time in bed overall. This can set up a vicious cycle: People with sleep fragmentation are often tired during the day, so they may go to bed earlier. But if they go to bed too early, they won't be able to maintain sleep all night long.

Sharkey says experts agree that the optimal amount of sleep for adults is seven hours. So if we think of those hours as a piece of string and we try to stretch the string to nine hours, it's going to break. She advises aiming for seven to eight hours sleep and being careful during the pandemic to limit our time in bed.

Staying home because of COVID-19 can also mean our brains aren't getting enough bright light during the day, which Sharkey says is important for good sleep. Exercising is good for our health in general, but she says keeping active helps us earn our sleep.

It's also important to practice good sleep hygiene. Be sure to sleep in a cool, dark room; don't have caffeine for 12 hours before you go to bed, avoid exercising right before you go to sleep; and stay off electronics for at least an hour before bedtime.

According to Sharkey, people who wake in the middle of the night and have trouble falling back to sleep could also have a more serious sleep disorder.

One of the most common sleep disorders is sleep apnea, where the airways become blocked causing the person to stop breathing for 20 to 30 seconds throughout the night. Common signs of sleep apnea include snoring, tossing and turning, kicking or jerking, and waking up tired.

"It's estimated that 24% of men and 9% of women have sleep apnea, and an estimated 90% of women with sleep apnea remain undiagnosed," Sharkey said. "The biggest risk factor for sleep apnea is age, second is being a man, and the third is weight."

She said the gender gap closes in midlife, at which point women catch up to men. If you suspect you may have sleep apnea, speak with your medical provider. Testing for sleep apnea is easy and can be done with a home monitor in one night.

Another cause of sleep fragmentation is periodic limb movement disorder, where people kick their legs during sleep. Each time they kick, their leg wakes their brain up a tiny little bit. Sharkey says this is not to be confused with restless leg syndrome, which is an urge to move while still awake and can contribute to tossing and turning in bed.

"There are all kinds of reasons that things can go bump in the night," Sharkey said. "If people are sleepy or having lots of nights where they feel like they're moving and not falling back to sleep, it is important to have it checked out."