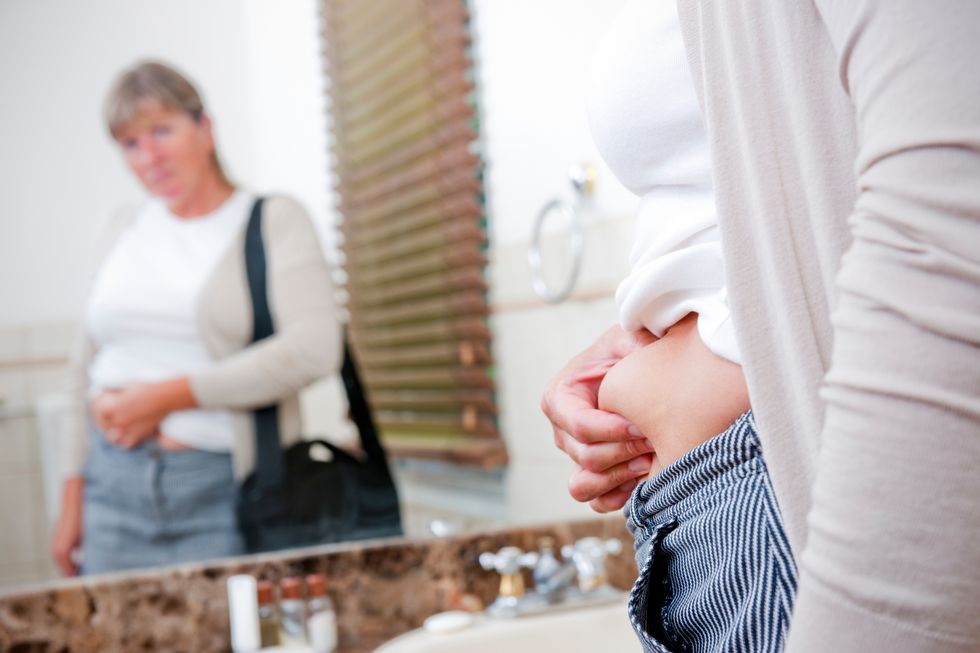 You might already be dealing with things like hot flashes, night sweats and mood swings. So, why do you also have to deal with belly fat?

It's a fact of menopause.

Lose estrogen, gain something else. And that is that "spare tire," "menopot," "muffin top" or whatever other appetizing pet name you utter in anger.

Evidence is mounting that the low levels of estrogen are the culprit behind menopausal fat gain.

Researchers know. When they studied American women, they found that after age 40, these women were more likely to become obese. That is ironically (or not) around the same time a lot of women begin perimenopause, the transition toward menopause. A 2014 review, published in the journal BioMed Research International, found that 65 percent of women between 40 and 59 were obese; that number climbed to 73.8 percent for women 60 and older.

It was found that these women stored the majority of their fat in their abdomens. (This special storage spot is aka "visceral adipose tissue.")

It's always estrogen, isn't it?

Well, with age many women tend to gain weight, too, because our metabolism slows. But proof of estrogen's link was found by researchers when they studied women who took hormone therapy for their menopausal symptoms. This group was found to have less fat tissue, particularly in the belly area, compared to others who didn't take hormone therapy. And when these women stopped the hormone therapy, they began to gain belly fat. Read more about menopause and weight gain.

OK, so besides blaming estrogen, we can link age and our metabolism to developing more belly fat. Anything else?

Good question, because there are multiple things at play here. One is sleep. Getting less than five hours a night has been linked to increased abdominal fat, according to experts, who also found that poor sleep increases your body's production of cortisol, which also increases its tendency to store fat around the midsection. And poor sleep also increases the production of a hunger hormone and a craving for high-calorie, high-fat foods.

But I've noticed that not every woman has this belly fat. How do they escape it?

Actually, the fat we're talking about is not the type of fat you can necessarily see or pinch—it's actually located deep inside the abdominal wall and surrounds some of the vital organs. That's what makes it a such a health risk.

Yes, belly fat that's stored in that region can lead to an increased risk for type 2 diabetes, heart disease and other chronic health issues. A troubling finding by researchers found that this type of fat produces large quantities of a protein called fibroblast growth factor 2, which can turn healthy cells into cancerous cells.

Let's just say it's not hopeless.

It's not. Don't abandon your zip-up pants for elastic-waist styles just yet. The same tried-and-true weight control basic rules apply here: Move more, spend more time standing than sitting, watch your portion sizes, cut down on the alcohol and sweets and eat mindfully. Learn more about how to fight menopausal weight gain with diet.

Now is a good time to reassess your habits and commit to healthy lifestyle changes going forward!