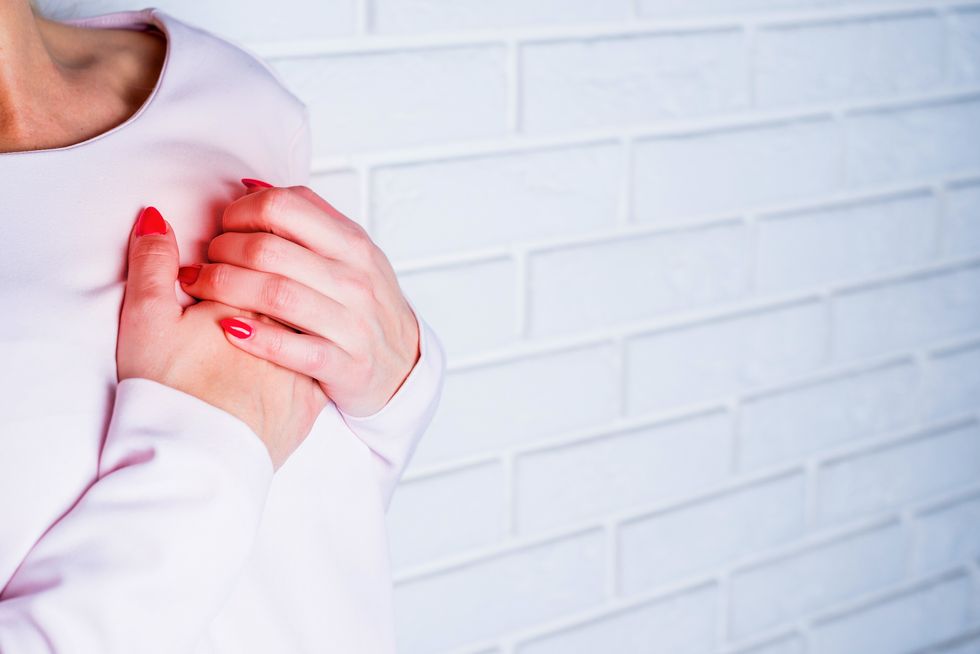 I Thought I Had a Pinched Nerve, But I Was Really Having a Heart Attack

Robin initially saw a chiropractor for her pain—she had no idea she was actually suffering a heart attack.

Pain in my left arm. That's how my journey started. I was 46 years old, healthy, and working 40 hours a week in a hospital as a respiratory therapist. I thought the pain was a pinched nerve, so I moved around as though nothing was wrong and hoped it would go away on its own. It didn't. Days later, I showed up to work in excruciating pain and mentioned to the secretary in my unit that I probably just needed to see a chiropractor. She happened to have an appointment that day and generously offered it to me. I graciously accepted and went for an adjustment. I thought it helped, or maybe I just wanted it to help. After the appointment, I went to dinner with a friend, played some board games, and then headed home.

As the night went on, the pain got worse. I turned to my son who had just graduated from college, and said, "I need to go to the ER." We went to the hospital where I worked and once they saw it was me, everyone was jumping around trying to see what was going on. I told them I just needed something for the pain, but fortunately, they ignored my requests and did an EKG. I heard them saying, "You are having a heart attack" and all I could respond with is, "No. I'm not!" My friend from the cath lab said calmly, "You are coming with me." And I remember thinking, "No. I'm fine. I just need something for the pain." Later, when I woke up, I found out that I had 100 percent blockage in my right coronary artery. I ended up with 3 stents. I was still in the hospital two days later when I told the cardiologist I still had pain, although not as intense. I went back to the cath lab and they put in 3 more stents. Within 3 days, I had 6 stents. I stayed at the hospital for one week before returning home.

Eleven hours after returning home, I felt extreme pain down my arm. The pain was off the charts this time—on a scale of 0 to 10, my pain was a 12! Back to the ER I went. I was having my second heart attack and this is when they put in my 7th stent.

Working in a hospital turned out to be a gift. I became hypervigilant and very tuned into my body. I learned that if you have something you've never had before, go to the doctor. If you think something feels wrong, go to the doctor. For the next 2 years, every 3 to 4 months, something would happen. I would feel off or would have pain in my arm. Three months after my second heart attack, I suddenly felt short of breath with tingling in my arm. I knew something was wrong and went right to the ER. Stent #8 was then inserted. I ended up with 2 more stents and bypass surgery for 90 percent blockage of my left anterior descending artery in 2009. Stents 11 and 12 were inserted within 6 months of my surgery, and stents 13 and 14 over the next few years. Then, my heart seemed to stabilize for a few years.

In 2013, my wife and I were in Alaska on vacation. I felt a strange pain in the middle of my back between my shoulder blades. It felt like someone was poking me but I chose to ignore it so I didn't ruin our vacation. However, I did keep an eye on where the hospitals were just in case.

As we sat in the airport on our way home, I found myself short of breath. I finally said to my wife, "Something is wrong." And then I told her about the pain. She was not happy with me. She is a cardiology physician assistant and works with the heart failure program at the Hospital of the University of Pennsylvania. She immediately called her boss (my cardiologist) and got me in to see her first thing the next morning. I was admitted to the hospital that afternoon and had stent #15 placed.

Since then, I fortunately have been stable. I have been on a daily aspirin regimen since 2008 as well as a handful of other medications as directed by my doctor. I tell my story to anyone who will listen as I don't want anyone to go through what I went through. I joined WomenHeart in 2015 and became a WomenHeart Champion. I am the district leader of the mid-Atlantic district of WomenHeart and I run a support group at Temple Hospital in North Philadelphia.

If this could happen to me, I believe it could truly happen to anyone. I had no cholesterol or blood pressure issues. All my bloodwork was normal. And I worked as a respiratory therapist with heart patients, so you would think I would have paid more attention to what was going on with me. But I never thought it would be me!

I encourage women to know their bodies and know their family histories. Also, know that you are not alone. There are many resources to tap into like WomenHeart and it's truly empowering to be with women who have the same problem and issues and truly understand what you've been through.

This article was developed in partnership with Bayer® Aspirin.