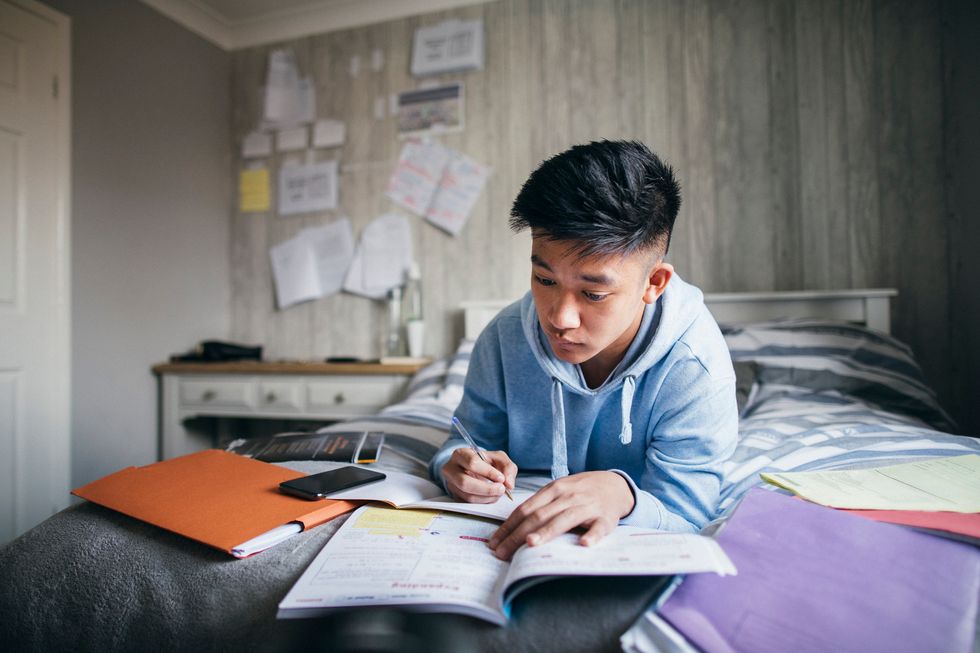 How to Parent Your Teen Through the Pandemic

How to Parent Your Teen Through the Pandemic

With schools closed, teenagers are missing out on more than classroom learning. A family therapist weighs in on how parents can help them navigate their schoolwork and their emotions.

I might just be a unicorn parent. Though my 17-year-old son has been out of school for a month, I haven't read one article about how to set up the perfect home-school environment. I've scrolled past all the anxious Facebook posts on the subject, too. It's not that I don't want him to succeed in his schoolwork. I do. But he'll be a senior next year and then, off to college. At his age, I trust that he can manage his time and take responsibility for his education.

For the most part, I've left my son to sort out his own schedule. Like most parents who are working remotely, I'm busy and don't have time to look over his shoulder.

After my son spent the first few days of remote school sleeping late and wearing his pajamas all day, however, I gave him one piece of advice: get a routine. Get up, make the bed, shower and dress, and clear a workspace at the dining table. Having worked from home for the past 25 years, I've learned having a routine makes me more productive and wards off depression. My son ignored every word and continued to sleep in and shuffle through the house in his pajamas.

Worried that my approach might be a bit too laissez-faire, I reached out to Catherine Pearlman, Ph.D., a family coach and author of IGNORE IT! How Selectively Looking the Other Way Can Decrease Behavioral Problems and Increase Parenting Satisfaction, and described the situation with my son.

"What the parent sees as the ideal schedule or scenario is not always what's best for the child," Pearlman said. "Parents like to get going in the morning and put on their work clothes and sit at the table and start their work, whereas kids may want to do their work in bed, they may feel better in their pajamas. This may be the greatest opportunity of their lifetime to lounge around in pajamas all day and sleep late, which is what teens really need, and work on their own schedule."

Pearlman said that parents need to be careful not to impose what works for them on their teens. Instead, she suggested opening a dialogue, asking your teen what would work best for them and how you can help.

Though she advocates starting adulting at 13 or 14 years old, Pearlman said that younger children and kids with any kind of a learning disability (who have special accommodations at school or extra support, such as a tutor) will need more supervision and structure during this time.

"This is an opportunity for parents to begin to step back from being intimately involved in the day-to-day of their child's education, especially if parents want their kids to grow up and go to college (if that's in the plan) and be able to function independently," Pearlman said.

For a lot of parents — especially helicopter parents — stepping back and risking their kid failing can be challenging. But Pearlman says that if we want them to succeed over the long term, we may have to let them fall down in the short run. Parents must be willing to let kids miss assignments and not get perfect grades.

To be honest, I've been more concerned about my son's mental health than his math homework. Being stuck at home isolated from friends is tough on all of us, but particularly on teenagers, whose peers often play a central role in their lives.

"Parents don't like to think this, but in high school, friends are really their teen's world, not the homefront," Pearlman said. "It's even worse for kids if their parents belittle the stress of not getting to be with their friends."

Pearlman told me that it's important for parents to recognize that this separation from their friends is developmentally painful for their teen. Without the parent's support, the teen will feel even more alienated.

"Now, not only do they not have their friends, but their parents don't even understand them," Pearlman said.

Then there's the absence of extracurricular activities. Normally, my son stays after school every day rehearsing a play or building a set. Many of his peers are on sports teams or play an instrument. These activities provide a creative outlet and allow them to spend time with their friends outside of the classroom.

She added that parents may be stressed about the SAT's or spring sports being cancelled — and how that might affect college applications — but that we need to remember every student in the country is in the same boat. Pearlman added that there is not one way for a student to be successful.

"This is a bump in the road," Pearlman said. "Parents need to forget about their own stress and be there for their kid to empathize and to reassure them that this will work out." This same advice applies to parents of high school seniors, who will be missing out on important events such as prom and graduation due to the pandemic, she added.

Pearlman recommends parents say to their teen, "'This is a terrible time, I have no idea how it's going to go, but we're going to figure it out, we're going to work through it together. And I'm sorry that you have to go through this.'"

After talking with Dr. Pearlman, I relaxed my attitude towards my son and even suggested that he do his schoolwork in bed. He hasn't taken me up on that idea, but he does still sleep until 9 or 10 am, and he puts on fresh pajamas after his shower. Sometimes he completes his last assignment late at night after we've watched a movie — but he's getting his work done.

More importantly, he's managing his time and his responsibilities on his own and he's building resilience. To me, that's the most important lesson of all.