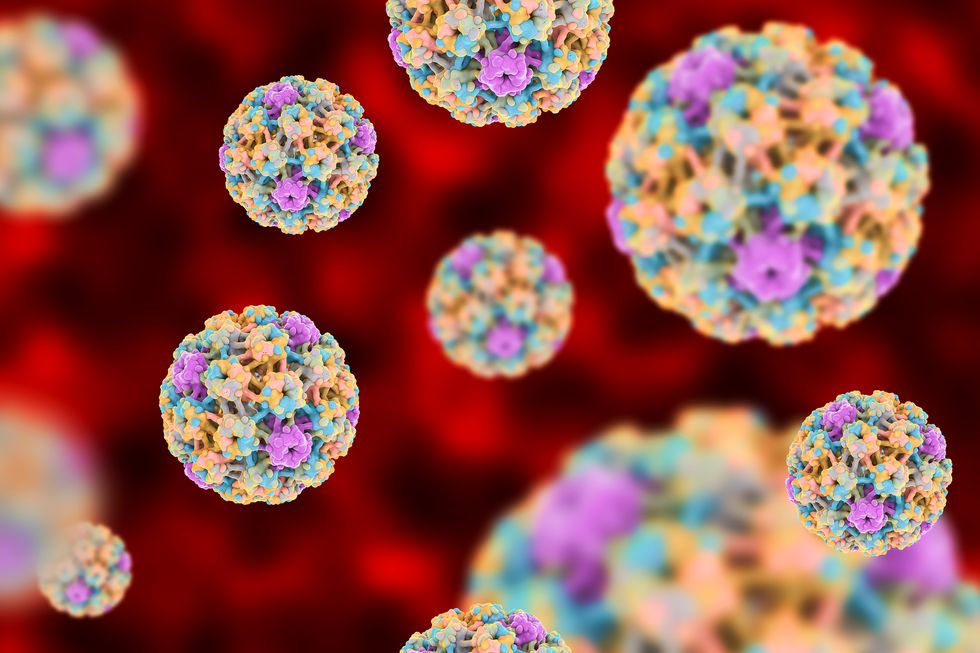 How Many People Have HPV?

Nearly half of American men and women under 60 are infected with the human papillomavirus (HPV), putting them at risk for certain cancers, federal health officials reported Thursday.

This article has been archived. We will no longer be updating it. For our most up-to-date information, please visit our hpv information here.

THURSDAY, April 6, 2017 (HealthDay News)—Nearly half of American men and women under 60 are infected with the human papillomavirus (HPV), putting them at risk for certain cancers, federal health officials reported Thursday.

Some types of HPV can cause genital warts and are considered low risk, with a small chance for causing cancer, the CDC report said. Other types are believed to be high risk and can cause cancer in different parts of the body. Those areas include the cervix and vagina in women, the penis in men, and the anus and neck in both genders.

However, the HPV vaccine has the potential to reverse the epidemic and prevent thousands of cancers in the United States each year, the CDC researchers said. In fact, it's already having an effect, said Geraldine McQuillan, a senior epidemiologist at the CDC's National Center for Health Statistics (NCHS).

"After the introduction of the HPV vaccine in 2006, there has been a decrease in genital HPV in young adults—this is a vaccine against cancer," she said.

In teenage girls, HPV infection has dropped 60 percent, and in young women it has dropped 34 percent, McQuillan said.

According to Fred Wyand, spokesman for the American Sexual Health Association, "These data are a further confirmation that HPV deserves its moniker as the 'common cold' of sexually transmitted infections."

Experts believe that most sexually active people have HPV at some point. "Fortunately, most of these infections do no great harm and will clear naturally by the immune system," Wyand said.

To estimate the prevalence of HPV infection among U.S. adults aged 18 to 59, the researchers used data from the National Health and Nutrition Examination Survey from 2011 to 2014.

The investigators found that during that time period, the prevalence of oral HPV for adults of both genders stood at just over 7 percent, while 4 percent of men and women had high-risk oral HPV.

The prevalence of oral HPV was lowest among Asian adults and highest among black adults. And more men than women were infected with oral HPV, the findings showed.

As for genital HPV, Asians had the lowest rate of infection, while black adults had the highest rate.

Although the HPV vaccine prevents about 70 percent of all cervical cancers, too few girls and boys are getting it, McQuillan said.

According to a 2015 report, six out of 10 girls have started the HPV vaccine series, as have five of 10 boys. All girls and boys aged 11 or 12 should get the recommended two-dose series of HPV vaccine, the CDC advises.

"The vaccine is targeted to very young kids because you have to catch them before they are sexually active," McQuillan explained.

As more people are vaccinated, further declines in HPV and the cancers it causes will be seen, she said.

Wyand added that "HPV immunization is a sparkling triumph of public health. It works very well and has been shown to block virtually all infections and diseases related to the HPV types it covers."

Electra Paskett, a cancer control researcher at the Ohio State University Comprehensive Cancer Center, pointed out that there's still a lack of urgency among parents to get their children vaccinated.

In addition, she said, "the vaccine is not strongly and routinely recommended by physicians."

Paskett believes the vaccine should be a regular part of a child's vaccine program and not singled out as something special. It's up to doctors to include the vaccine in the usual vaccine schedule, she said.

"The vaccine is a part of cancer prevention," Paskett said. "This vaccine has the potential to prevent 30,000 cases of cancer each year and is woefully underused."

The report was published April 6 in the CDC's NCHS Data Brief.

Nearly Half of U.S. Men Infected With HPV, Study Finds