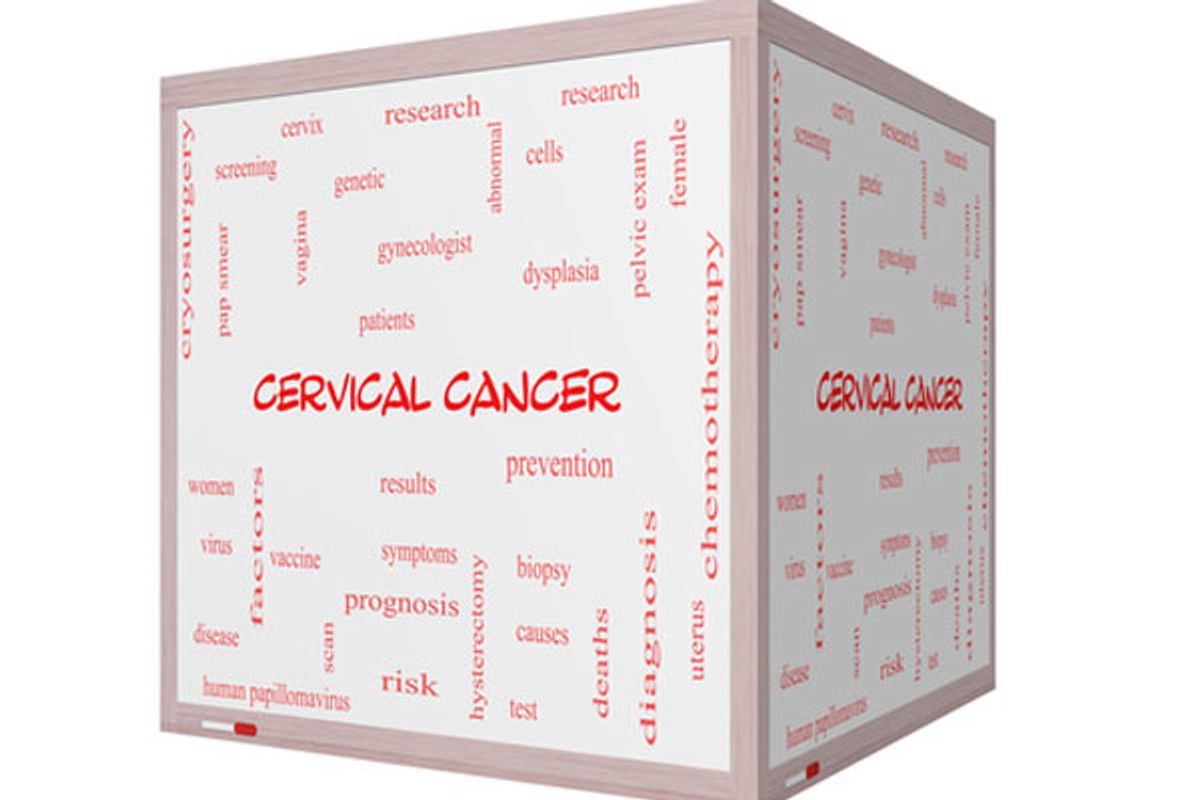 Getting Diagnosed with Cervical Cancer

Surviving a radical hysterectomy and a battle against cervical cancer, read one woman's touching story.

I started my cervical cancer journey April 12, 2001. I went in for a routine Pap—after not having had one for a few years for some pretty typical reasons: lack of insurance and body image issues.

I got the shock of my life: a diagnosis of cervical cancer. This was devastating, to say the least. Cervical cancer came in and changed everything. Here I was, 25 years old, working in Washington, DC, as a successful television producer and having the time of my life. In an instant, without warning, that all changed. Instead of thinking about my next interview, I was thinking about the end of my life, with my hopes, wishes and dreams not yet fulfilled. At this early stage in my life, I could only think, “This is it?"
I fell into a deep depression and retreated from most of my friends. How could they understand this when I didn't even understand what was happening?

My doctors told me that my best chance at living was to have a radical hysterectomy. That meant giving up my womb and any chance of getting pregnant and giving birth. This simply was not an option for me. I wasn't married and didn't have any children. But I always thought this might change. There had to be another way. My doctor told me about a procedure called a radical trachelectomy. But there was a catch. If I was a candidate for this procedure, I would have to get pregnant immediately or freeze my eggs.

I didn't know what to do. It was one of the hardest decisions I've ever had to make. I got second opinion on top of second opinion. I met with ministers and consulted and prayed about it with family and close friends. During this time, the hospital continually called to find out my decision. Time was running out. Harvesting my eggs was very expensive—and my health insurance wouldn't pay for it because I was unmarried. It was impossible to raise the funds. Finally, everyone agreed just going ahead with the hysterectomy would be best for me.

Feeling defeated, I agreed to the radical hysterectomy. The hospital wanted to schedule my surgery immediately, but I found an excuse for every date they suggested. They finally scheduled my surgery for June 14.

So, on June 14, 2001, at 7 a.m. at Johns Hopkins Hospital in Baltimore, MD, everything that I thought that made me a woman was removed. I was heartbroken. I felt I had given up a child that I never had. A part of me was gone, and I would never be the same again.

My plan was to recover from surgery and go back to my life. I never wanted to think or talk about cancer again. However, after surgery, my doctor explained that the tumor was bigger than they originally thought. I would need chemotherapy and radiation therapy. This wasn't in my plan. The plan was supposed to be surgery and back to my life—put all of this cancer stuff behind me. I sank into a deeper depression.

I started treatment late that summer. I had chemo once a week and radiation treatments five days a week. Wednesdays I would start my chemo at 7 a.m. and finish up with a zap of radiation in the afternoon—I referred to it as my afternoon cocktail. Compared to others I know, I had it easy, but at the time it sure didn't feel like it. By the grace of God, my loving mother, wonderful medical team and supportive friends, I finished my treatment. I had survived!

I still had my ups and downs, but I was so grateful for my second shot at life. I tried relentlessly to get back to normal life, my career, my world—one that didn't include cancer. But it's kind of hard once your body fails you and you're constantly going in for checkups and everyone around is asking you, “How do you feel?" The worst part was that just the mere sight of a pregnant woman or a new mom would send me into a complete breakdown.

My family, friends and coworkers helped me through this dark time. You have to remember that, when I was diagnosed, HPV and cervical cancer weren't in the news as they are now. So, I felt all alone and embarrassed—until I started educating myself about HPV and its link to cervical cancer. During this time my friends were doing research too. We all really needed to do something. We had to let people know how to protect themselves from this totally preventable cancer. We couldn't let anyone go through what I went through, if there was a way to avoid it. Out of this, Tamika & Friends (www.tamikaandfriends.org) was born. You could say it's my baby!

Today, I'm cancer-free and enjoying life. I still hope to have a baby somehow someday. I know that one day women will stop dying of cervical cancer. Cervical cancer has changed my life forever. But what doesn't kill you makes you stronger. I am strong. I'm a survivor!