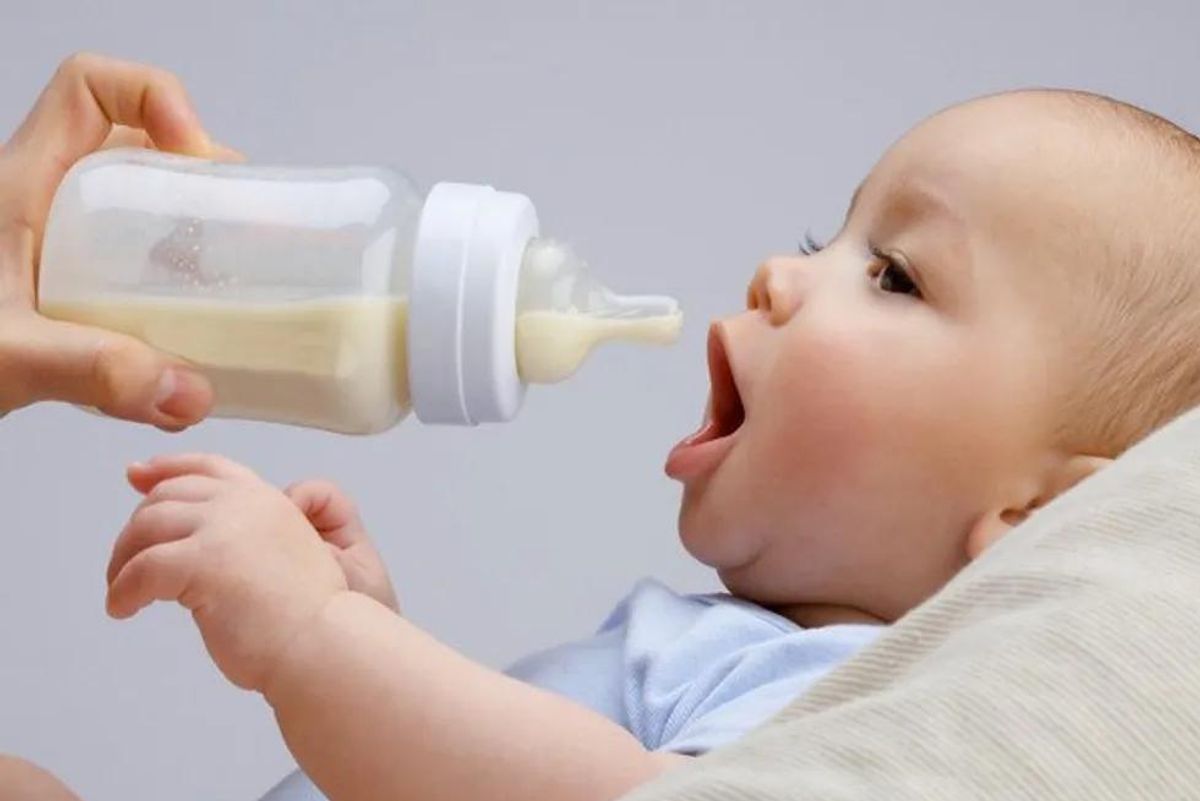 Feeding babies formula from a big bottle might put them at higher risk for greater-than-normal weight gain and weight-for-length size, a new study suggests.

Researchers who assessed 298 babies found bottle size in early infancy is an important factor when measuring for unhealthy weight gain and higher risk for obesity at 6 months of age.

"Potentially, they were being overfed," said Dr. Charles Wood, a pediatrician and co-author of the study.

"We're trying to figure out the modifiable factors in early life that can prevent obesity or promote healthy growth in the first year of life," added Wood, of the division of general pediatrics and adolescent medicine at the University of North Carolina at Chapel Hill.

The study concluded that reducing bottle size might be one way to reduce early onset obesity. The U.S. Centers for Disease Control and Prevention reports childhood obesity has more than doubled in the United States in the past 30 years.

The infants in this study were fed exclusively by bottles containing formula, not breast milk or expressed breast milk, between the ages of 2 months and 6 months.

Almost half the parents used a "large" bottle, defined as one that held 6 or more ounces of formula. Overall, weight gain averaged about 6 pounds, but infants fed with a large bottle gained about 7 ounces more and had larger weight-for-length size by the 6-month mark.

"Bottle-fed infants might be at greater risk of being overfed, especially if the parent pushes the infant to finish the bottle, even if the baby is giving fullness signs," Wood added.

Other research has reported that formula-fed infants are at a greater risk of obesity later in life. Researchers have also found that babies who are fed breast milk from the bottle, versus by breast, also gain more weight.

The American Academy of Pediatrics says both breast milk and formula are safe and healthy. However, the academy suggests exclusively breast-feeding for the first year for overall health and reducing the risk of obesity. A variety of solid, healthy foods and a cup can be introduced at 6 months, they advise.

"I'm a pediatrician, and breast-feeding is a top priority," said Wood. "But there is a significant percentage of families that feed formula. This is a start to looking at bottle sizes to help promote healthy growth."

Dr. Elsie Taveras, an associate professor of pediatrics at Harvard Medical School in Boston, said women choose to bottle-feed for many reasons. "We need to get away from bottle versus breast, to a certain extent, and among the mothers who are bottle-feeding, we need to give them equal guidance," said Taveras.

With bottle-fed babies, "the additional milk in the bottle might be a bigger cue than the infant satiety that the feeding isn't complete, especially when a parent isn't as aware of knowing when he or she is full," she added.

Taveras applauded this study for its look at portion control. And she suggested that parents work with their child's pediatrician to understand infant signs of hunger and fullness. Caregivers should not let remaining milk in a bottle represent a need to keep feeding, she said.

Wood and Taveras said parents should watch for these signs:

"Every baby eats differently, but at 2 months, they're taking in about 4 ounces. Ideally, with a young infant, you want to fill up a bottle to 4 ounces and see whether they need more, then make more. It really goes back to seeing if they're full," Wood suggested.

The study authors added that more research is needed to understand fully the link between bottle-feeding and obesity risk. The researchers will track these children as they get older and ascertain whether the weight gain at this stage is significant.

The study was published online June 7 in the journal Pediatrics.