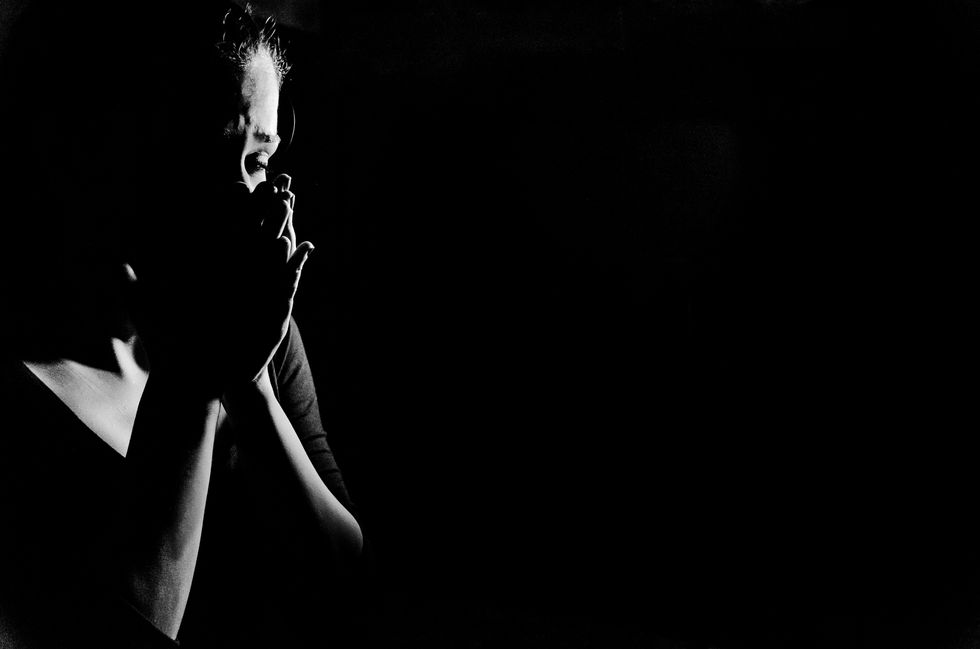 Grieving is Hard, Necessary Work and Coronavirus Makes it Harder

Isolation can be incredibly difficult for those in mourning, including those who were already grieving when the pandemic hit.

After my friend Julia's mother died last month, she gathered her mother's things from the nursing home, called relatives and close friends to share the news and made arrangements for the cremation. The next day she boarded the second-to-last flight out of the small New England town where her mother lived and flew home. She was the only passenger on the plane.

[In March, HealthyWomen spoke with Julia for our story about caring for older family members during coronavirus.]

"Julia," who asked to use a pseudonym to protect her mother's identity, had planned to honor her mother's wishes with a memorial service. Instead, she is mourning alone.

"It has been very difficult to not physically be with friends, my own friends, and hers as well," Julia told me in a text exchange. "I think there is a sense of closure that happens, and that is missing. What has been difficult is not being able to be around people. It's sort of made me go in the other direction and not want to talk to people endlessly on the phone. All the things you normally do when someone dies, you can't."

As Americans endure their second month of staying at home to halt the spread of COVID-19, the respiratory illness caused by coronavirus, many are feeling the effects of social distancing. Losing our physical connections with others can be disorienting and leave us feeling isolated and depressed.

This isolation can be especially difficult for those in mourning, including those who were already grieving when the pandemic hit, as well as those who are coping with the death of a loved one from coronavirus or, like Julia's mother, an unrelated illness.

A few years ago, I heard a radio interview with Kerry Egan, a Harvard Divinity School educated hospice chaplain and the author of the New York Times best-seller, "On Living." I've thought about that interview often in the past weeks, and recently reached out to Egan for her guidance on how to cope with grief during this period of isolation.

"One of the things that's really hard about this pandemic is that one of the most effective comforts for people who are grieving is to simply be present with them," Egan said. "So one of our best tools for helping a loved one or friend who's grieving has been taken away because of coronavirus."

She said we can support those who are grieving by calling or sending a card or text message, but not expecting a response. The person may not have the energy to respond or to talk on the phone.

"But simply seeing that you [reached out] might be a sense of comfort," Egan said. "It's a way to let people know that, even if we can't physically be with them in their grief, we still have an emotional presence."

Even under normal circumstances, however, we live in a society that has little patience for grief. Like so much else in our culture, grief is often seen as something to be conquered or a short-term condition to be dealt with quickly. When someone dies, friends and family gather immediately and offer support, but then go back to their lives and expect those left behind to do the same.

Egan believes that a big part of people's response to grief is that no one wants to be reminded of their mortality.

"What's happening with this pandemic is that we're all being forced to really grapple with our own mortality with every decision we make. Am I going to the grocery store today or can I make do with what I've got in the freezer? The fact that you're even asking that question means that you are grappling with your own mortality in a way you were not doing a month ago," Egan said.

The necessary work of grief

For weeks after my mother passed away in 2004, I began each day by picking up the phone in the kitchen and dialing her number. I had been calling her every morning for so long that the act had become as innate and regular as breathing. I felt lost without our daily conversations.

When I told Egan about this, she explained that I was going through the process of figuring out how the world would look after my mother died.

"When people die, it's an incredible transition. They don't just stop existing — even if you don't believe in an afterlife, even if you don't believe in heaven — the person who died doesn't stop existing," Egan said. "They still live in your memory and in your heart, and you still have pictures of them in your house. The grieving process is a difficult process of figuring out for yourself how that person sits in your world."

Egan added that grief is a normal and natural experience, but that doesn't make it easy or without pain. She emphasized that grief is really hard and it hurts. Even in normal times, it's an incredibly difficult adjustment to make.

My friend, "Peter," who asked not to be identified to protect his privacy, has been grappling with that adjustment since November, when his 35-year-old son took his own life. In the months before the pandemic, I often checked in to make sure he was getting out of the house and interacting with others. Now he is alone.

"It's much worse [in isolation] because I have to go to therapy via telehealth instead of seeing my therapist face-to-face, which I find to be much better," Peter told me via text. "I can't go to yoga, the cardio gym, or socialize with anyone, including my [other] son."

Peter has seen his other son once since the pandemic began "We couldn't hug, and had to keep our distance. It was absurd."

He tells me that isolation magnifies his grief and robs him of his energy and stamina. Peter continues to lift weights at home, does virtual yoga classes and works in the yard. He's also continued his consulting practice which he operates from his home (he and his colleagues have private offices and they practice social distancing).

"On workdays, my staff keep me going. They provide the treadmill I need to step on to get things done," Peter explained.

Egan tells me that suicide is its own particular type of grief that comes with an enormous amount of guilt and regret.

"There is a sense with suicide that it is your fault; somehow that you should have been able to prevent it," Egan said. "No one thinks to themselves, this person died of a severe mental illness, the way you would say this person died of severe heart disease. No one says, ‘I should have been able to single handedly rip out that stage four colon cancer.'"

An act of love

I know there is nothing I can say to Peter that will assuage his pain. In my desire to comfort him, I've told him that, though his pain will never go away, it will decrease over time. Egan explained why this may not always be comforting.

"Sometimes people won't want to stop grieving because they think it's their connection to the person they lost. They're afraid that if they lose that acute pain, they're going to lose the person they love," Egan said, adding that this isn't true, because we still get to decide how the departed person remains in our life.

That's what Julia and Peter, and millions of others are doing. It's what we are all doing for those loved ones who have left us.

"It's Ok That You're Not Ok: Meeting Grief and Loss in a Culture that Doesn't Understand" by Megan Devine

"Anxiety: The Missing Stage of Grief" by Claire Bidwell Smith