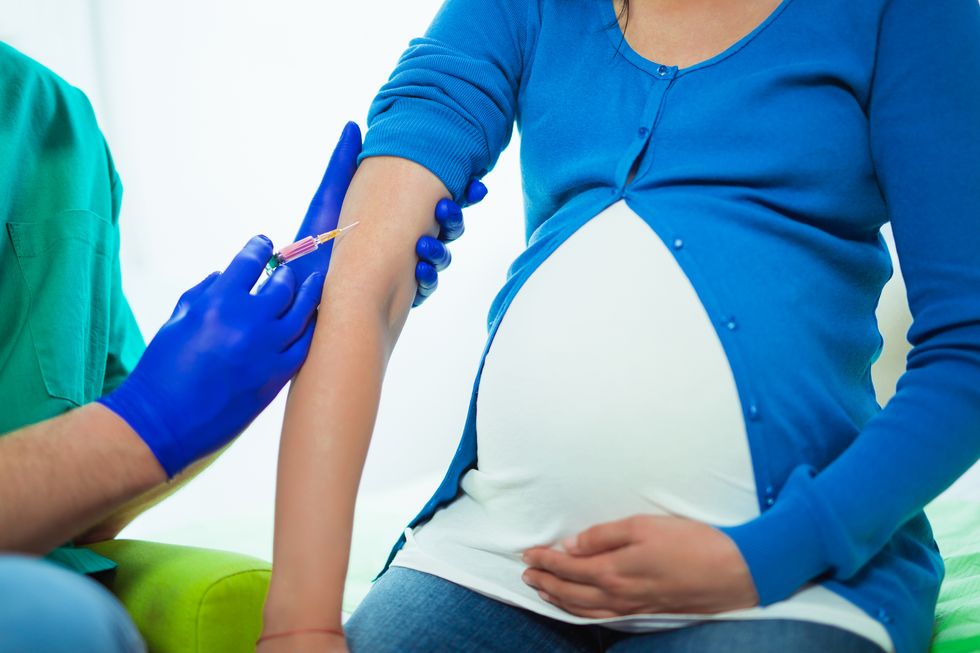 Only a Third of Pregnant Women Getting Vaccinations They Need

About two-thirds of pregnant women in the United States don't get vaccinated against both flu and whooping cough, putting them and their newborns at risk.

TUESDAY, Oct. 8, 2019 (HealthDay News) -- About two-thirds of pregnant women in the United States don't get vaccinated against both flu and whooping cough, putting them and their newborns at risk, a new report from the U.S. Centers for Disease Control and Prevention says.

READ More About the Flu Shot During Pregnancy

"Influenza and pertussis (or whooping cough) are serious infections that can be deadly for babies, especially those who are too young to be vaccinated directly," Dr. Anne Schuchat, principal deputy director of the CDC, said in a news briefing on Tuesday.

But when women receive these vaccines during pregnancy, they pass along antibodies to the fetus that then provide protection during the time newborns are too young to be vaccinated.

"Women who are pregnant are more than twice as likely to be hospitalized if they develop influenza, compared with similar-aged women during influenza season," she said.

But as the new CDC report found, only a minority of pregnant American women are getting the shots they need.

The agency surveyed nearly 2,100 women aged 18 to 49 who were pregnant between August 2018 and April 2019. Of those, 54% said they got a flu shot before or during pregnancy, and 55% were vaccinated for whooping cough while pregnant.

Looking at data on all 15- to 44-year-old women who were hospitalized due to flu since 2010, between 24% and 34% were pregnant, the CDC study found, even though only 9% of U.S. women in this age group are pregnant at any given time each year.

"Women have enough issues to address when they're pregnant without going through a difficult hospitalization if they come down with influenza," Schuchat said.

In total, only about 35% of women received both vaccinations during pregnancy, the CDC said.

Dr. Laura Riley, an obstetrician and gynecologist-in-chief at NewYork-Presbyterian and Weill Cornell Medicine, in New York City, said, "The numbers are much lower than they should be and it is disappointing given the benefits for moms and babies associated with these vaccines." She said the numbers may be low because they came from an online survey that depended on patient recall.

But, Riley added, it's important for pregnant women to get protection from the flu. "If they get the flu, [they] are at greater risk for having severe complications like ICU admission, maternal death, prematurity, preterm labor," she explained.

The CDC recommends all pregnant women get a flu shot at any stage of pregnancy and the whooping cough vaccine (Tdap) early in the third trimester as part of routine prenatal care.

A flu shot reduces a pregnant woman's risk of being hospitalized due to flu by an average of 40%, a recent study found.

The flu is also dangerous for babies, especially those younger than 6 months. They are too young to get their own flu shot and have the highest incidence of flu-related hospitalization and greatest risk of flu-related death among children.

Flu vaccination in pregnant women reduces the risk of flu-related hospitalization for infants under 6 months of age by an average of 72%, according to the CDC.

And whooping cough can be deadly, especially before babies start getting the vaccine at 2 months of age. Two-thirds of babies under 2-months-old who get the disease require hospital care. Seven of 10 whooping cough deaths (69%) occur in that age group.

Tdap vaccination during the third trimester of pregnancy prevents more than 78% of whooping cough in babies under 2-months-old.

Schuchat suggested that many women may have the mistaken belief they are already protected.

"Many women thought because they previously received it (Tdap) that it was not needed again during the current pregnancy," she said during the news briefing. "But we've actually been recommending women get Tdap shots during each pregnancy since 2012."

And for any woman wary of getting vaccinated, Schuchat said that "it's been proven repeatedly that these vaccinations are safe for pregnant women and their developing babies."

Dr. Amanda Cohn, chief medical officer at the CDC's National Center for Immunization and Respiratory Diseases, called on obstetricians and midwives to discuss the importance of maternal vaccination with their pregnant patients.

"All expectant mothers should be up-to-date with recommended vaccinations as part of their routine prenatal care," he said in a CDC news release. "CDC strongly recommends that health care providers speak with moms-to-be about the benefits of safe Tdap and flu vaccination for their health and the well-being of their babies."

The new research was published Oct. 8 in the CDC's Vital Signs report.