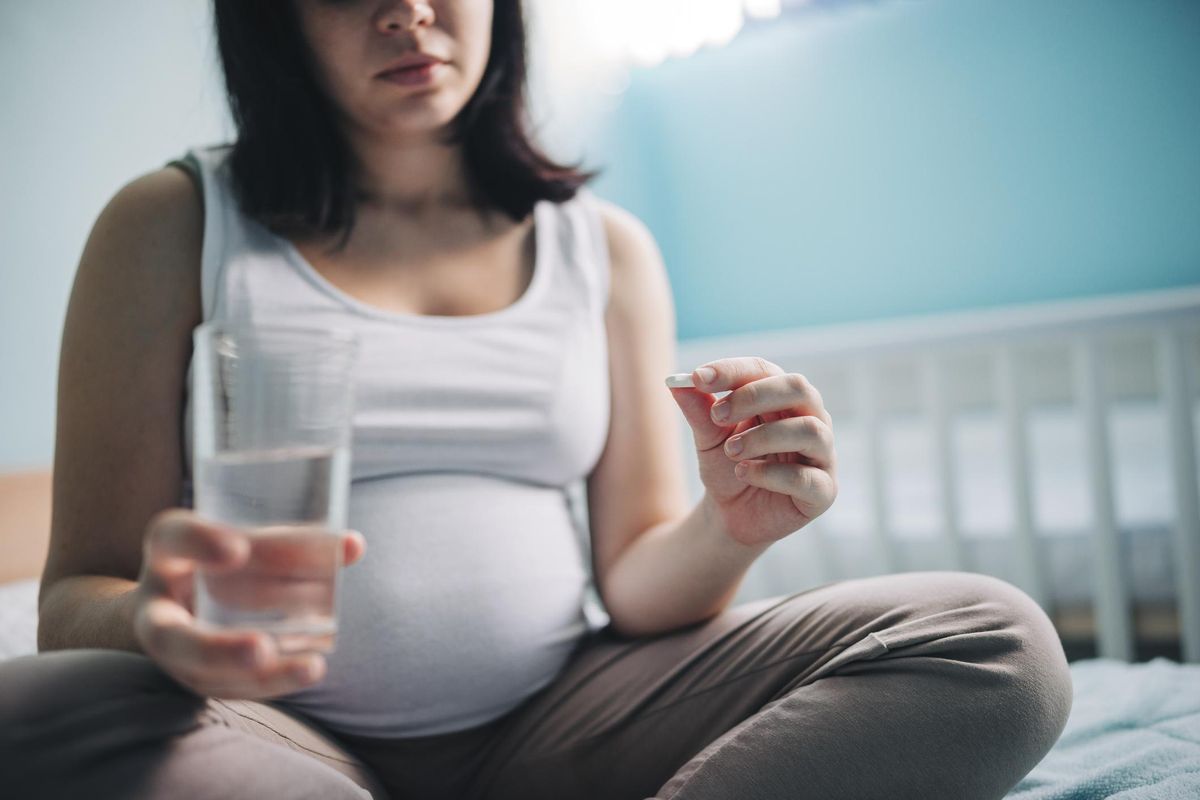 Our webinar, Healthy Pregnancy, Healthy Mom: Reducing Barriers to Treatment for Opioid Use Disorder, addressed challenges and support for women with opioid use disorder

Jen Simon tried many times to quit using the opioids she first started taking to help with painful periods, and then, to ease her anxiety and depression. But, she just couldn't seem to stop — until she found out she was pregnant with her second son.

"It was much easier to quit for someone else," Simon said.

It also helped Simon to know that her abstinence had a deadline. Once she stopped breastfeeding, she planned to start using drugs again. She stockpiled pills throughout her pregnancy and left the hospital with a large supply of opioid pain relievers. At no time, did anyone talk to her about the risk of opioid dependence.

What began as an appropriate use of prescription opioids turned into misuse — using drugs differently than prescribed — and ultimately into opioid use disorder (OUD).

Before she knew it, Simon had joined the 1.3 million adults in the United States, many of whom are women, who are addicted to opioids.

In a 2019 survey from the Centers for Disease Control and Prevention (CDC), 7% of pregnant women reported using prescription opioids during pregnancy and 21% of those reported misusing them. Nearly one-third (32%) of pregnant women who used opioids got no counseling about how opioids could affect their baby.

It's important for pregnant women who misuse opioids to be able to openly discuss their challenges and get information about their options, but too often, they face stigma, judgment and compelling reasons not to come forward for help.

To raise awareness about opioid use during pregnancy, HealthyWomen recently brought together clinical and legal experts for our webinar, "Healthy Pregnancy, Healthy Mom: Reducing Barriers to Treatment for Opioid Use Disorder," to shed light on the unique challenges and barriers to care that pregnant women with OUD face.

One of the biggest issues addressed during the webinar is that the baby will experience withdrawal, known as neonatal abstinence syndrome (NAS), a condition that increased dramatically between 2004 and 2014.

Concern for babies often overshadows concern for mothers, a phenomenon that dates back to the 1980s crack cocaine epidemic, according to Nancy Wolf, CEO of Libertae, a Pennsylvania drug treatment facility for pregnant and parenting women.

"We were focused on the effects of the maternal substance use on the children to the detriment of the moms," Wolf said on the webinar. "We didn't really concern ourselves with the moms that were facing addiction."

But women who abuse opioids during pregnancy need attention for their own health, too, partly because they're more likely than other women to have complications or die during childbirth.

Despite the importance of pregnancy care and treatment for addiction, many women don't seek care for themselves or their babies.

On the webinar, Shruti Kulkarni, Esq., counsel to Aimed Alliance, a nonprofit advocacy organization that works to improve health care in the United States, explained that women have reason to fear legal consequences if they disclose drug use during pregnancy. As a result, many women hesitate to seek treatment for fear of losing custody of their children or having to give up their children as a condition of treatment, despite evidence that punishing women doesn't stop them from using drugs.

Kulkarni also cited data from the Guttmacher Institute which shows that substance use during pregnancy is considered child abuse in 23 states and Washington, D.C. More than half the states and D.C. require healthcare providers (HCPs) to report suspected prenatal drug use to authorities.

Disclosure rules also vary by hospital and sit outside of HIPAA protections for patients' privacy, according to Dr. Mishka Terplan, a board-certified OB-GYN and addiction medicine doctor.

As a maternal health nurse, Beth Battaglino, RN-C, who is also CEO of HealthyWomen, has seen firsthand how these policies dampen women's willingness to seek care.

"Patients … that are trying to keep [drug use] a secret are not going for prenatal visits," Battaglino said during the webinar. "They're just getting pregnant and then coming to deliver the baby."

But disclosing drug use may be well worth the risk of child welfare authorities getting involved. Experts on the webinar explained that seeking help can reflect positively on women for at least trying to get better, and that getting prenatal care is vital to delivering healthy babies even if the mother uses drugs during pregnancy.

"I have yet to meet the person who's pregnant who uses drugs who doesn't care about her health or the health of her baby-to-be and isn't actually seeking information about how to be more healthy in her pregnancy," Terplan said in the webinar.

Support for pregnant women with OUD

Concerns about the baby can be a powerful motivator for pregnant women with OUD.

"Pregnancy is actually a very promising time for people to make progress with substance use disorders," said Dr. David Gunther, a board-certified family physician and addiction medicine specialist at Column Health, who spoke with HealthyWomen but did not participate in the webinar.

"When people are pregnant, doors open," Terplan said in the webinar. After delivery, though, women are at greater risk of relapse.

To support people in recovery, Terplan said HCPs should be welcoming and nonjudgemental. He and Kulkarni both called for decriminalizing drug use in pregnancy so women can get the care they need without fear of legal consequences.

Too much to lose

It took Simon two years to get treatment after her baby was born. Using multiple drugs and deeply depressed, she faced a choice: double down on drug use or ask for help.

"I was at the crossroads, and the other side really scared me," Simon said.

She found a psychiatrist who specializes in addiction, went to therapy and started taking an opioid blocker to reduce her physical and emotional opioid cravings.

Today, it would be hard for Simon to spontaneously take drugs. She'd have to let the opioid blockers out of her system, find new pill sources and be prepared to disappoint a lot of people — including her kids, now ages 8 and 11.

Pregnant or Worried About Infertility? Get Vaccinated Against Covid-19