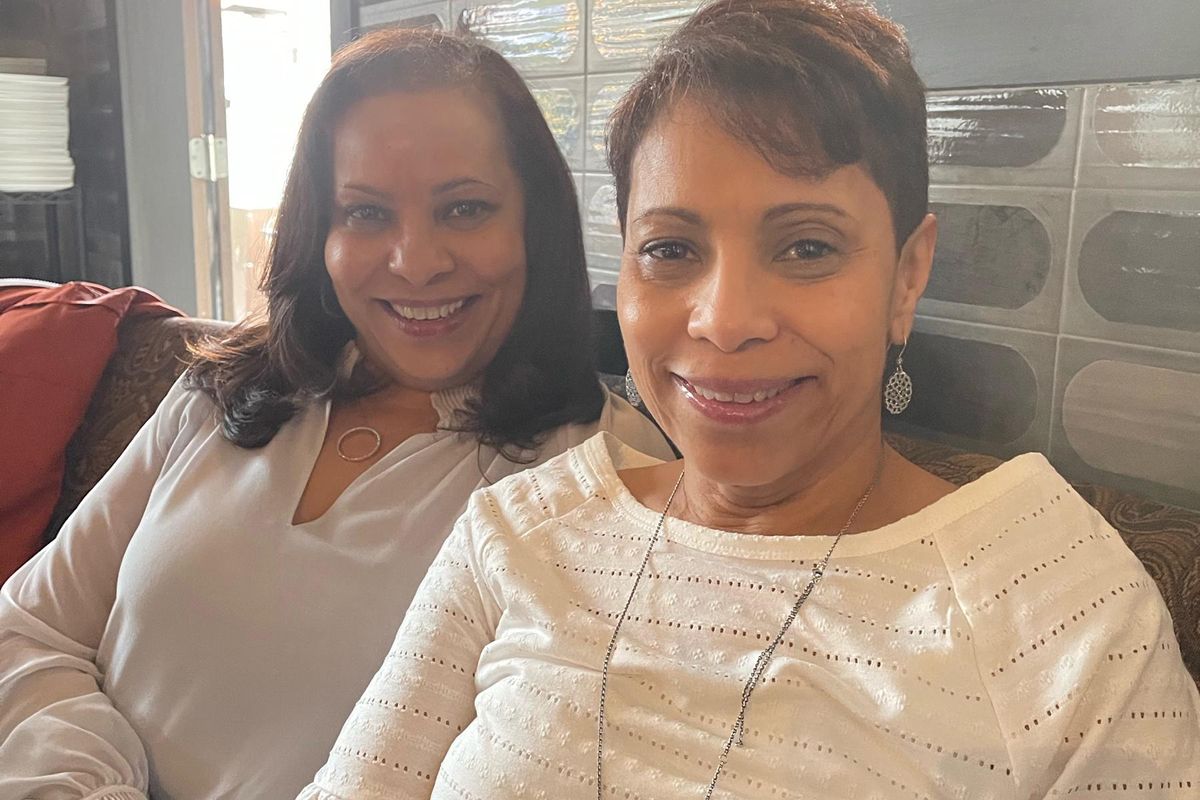 Nancy Irizarry, right, with her twin sister, Brenda, on their birthday this year.

As told to Jackie Froeber

I was 44 years old when I began feeling a pulsating pain on the left side of my lower back. The pain lasted about a day and started around the time I was supposed to start my period. When I didn't start my period that month, I went to my gynecologist and she told me not to worry. It was probably stress. To be on the safe side, she ordered blood work, including a CA 125 test. She didn't tell me that it measures the level of CA 125 protein in your body, something that is commonly associated with ovarian cancer. All I knew was that the test results came back normal.

I continued having the monthly pain and no period — and telling my gynecologist — for almost a year, until the day the pain got so bad that I went to the emergency room, where I literally passed out from the pain. The next thing I knew, a doctor was waking me up saying, "You know you have ovarian cancer, right?"

It was the first time I heard those words.

The gravity of the diagnosis did not register with me, even though doctors were trying to transfer me to a facility with an oncology department, which was hard to find because I lived 50 miles from any big city in New York.

After a week in the hospital, I was transferred to Mount Sinai in Manhattan and waited another week for the surgeon to perform a total hysterectomy with salpingo-oophorectomy to remove my uterus, cervix, fallopian tubes and my remaining ovary (I'd had one removed previously because of a cyst). I was given a treatment plan, that included chemotherapy, but I was still in a la-la land of sorts. I knew I had ovarian cancer, but I wasn't grasping what was ahead.

Two weeks later, I was lying on my couch and thinking about everything I had just gone through when it hit me: I have cancer. I jumped up from the couch and called my oncologist and that was the first time I was really able to hear him when he said, "Yes, Nancy. You have ovarian cancer. We have to start chemo and additional treatment right away."

The plan was aggressive: chemotherapy 9 a.m. to 5 p.m., five days a week, followed by two weeks off, for 14 weeks. My type of cancer, granulosa cell, is rare and only found in 2% of ovarian cancer cases. My oncologist wanted the chemo to be done in the hospital, but I begged him for an alternative. I had just spent weeks in the hospital, and I was devastated at the thought of going back so soon. By a stroke of amazing luck, we found a doctor in my neighborhood who was willing to give me chemotherapy on my doctor's behalf, and I was able to get treatment close to home.

After researching the disease and the treatment plan, I was overwhelmed thinking about losing my hair and crushed at the thought of losing my job as an insurance underwriter. It seemed like cancer was going to take up all my time for the foreseeable future. I also knew there was a chance that the cancer could come back, despite the aggressive treatment — but I had to try.

Unfortunately, chemotherapy turned out to be a short-term solution. Less than two years later, in 2008, I felt that same pulsating pain on my left side.. I knew right away the cancer had returned. We caught it quickly, and I had surgery to remove a tumor that had formed on my pelvis — no chemotherapy — but I knew from my research that a recurrence meant my condition was chronic and the tumors could return. The third time, we did the reverse, and I had four rounds of chemotherapy and no surgery.

You simply cannot prepare yourself for the emotional roller coaster of recurrent cancer. And the apprehension never really goes away. After 15 years, I still get unbelievable anxiety every time I go in for a test. In total, I've had four recurrences of ovarian cancer (in addition to the initial diagnosis) and four surgeries over the past 15 years. Currently I'm on targeted therapy to maintain the two tumors I still have, and I am avoiding surgery — which is working for me.

Cancer can feel like a full time job: I have CT scans every three to six months and countless doctor appointments. There are days where I battle fatigue, pain in my joints and mental fog, but overall I feel good. I practice yoga and meditate to keep my stress in check. I also stay busy volunteering and helping other women with ovarian cancer.

Looking back on the first time I felt that pulsating pain on my left side, I wish I'd listened to my body and gotten a second opinion or pushed for more testing even though my blood work was normal. I now know that my type of cancer doesn't show up in an elevated level of CA 125. My new oncologist told me he'd never forget me because I was his only patient with ovarian cancer and a CA 125 level at zero.

Not all women will check the same boxes when it comes to ovarian cancer. I don't have typical risk factors, such as a family history of the disease, and I don't have the BRCA gene. I did have some gynecological problems — uterine fibroids and the ovary with a cyst in 2001 — but I'd never even heard the term ovarian cancer before going to the ER in 2006.

It's true that ovarian cancer rarely has symptoms in the early stages, but an advanced-stage diagnosis isn't a death sentence. You can live with ovarian cancer and have a great quality of life thanks to the variety of new treatments that are available today.

Today, I'm a board member for the nonprofit TEAL Walk organization, which helps raise funds and support fellow ovarian cancer survivors. There are a lot of us who are 15-plus years out from diagnosis — I'm looking forward to being part of the 20-plus group.