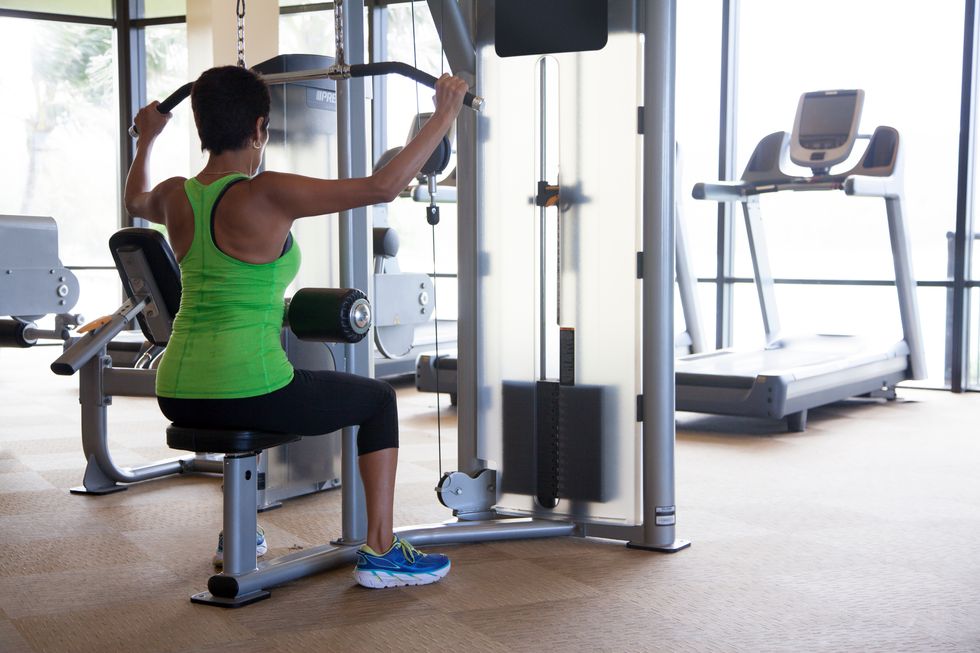 I Recovered From Anorexia in My 20s, but I’m Still Coping With the Damage to My Bones at 50

I Recovered From Anorexia in My 20s, but I’m Still Coping With the Damage to My Bones at 50

I’m 50 now, and I have osteopenia, which is low bone density that’s less severe than osteoporosis. I have it because I had an eating disorder starting when I was a teenager, for about ten years.

When I was 15 years old, from an outsider’s perspective, I was a typical teenager. I was on the pom pom squad, had a little group of friends, and I dealt with normal adolescent issues, including weight gain that can occur during puberty. Normal adolescent weight gain became a big deal to me. I decided I was going to lose weight, but for me that did not mean going on diet and focusing on exercise. For me, that meant severely restricting my food intake..

I lost about ten pounds between October and May that year—I could fit into smaller clothes, and I felt better about myself. And then it just kept going and kept going and kept going, until I got down to 85 pounds in my junior year. One weekend morning I was wearing a sleep shirt that came down to the middle of my thighs, and my dad saw me walk by and said, holy shit. He made me get on the scale and saw that I weighed 85 pounds, and he thought my heart was going to stop. My parents took me to see several specialists—like an endocrinologist and psychiatrist—as well as my primary care provider. All agreed that I did not need to be hospitalized because I was eating and was properly hydrated. I just wasn’t eating enough. Anorexics who refuse to eat  usually require intravenous feeding and liquids and must be hospitalized.

I started group therapy with bulimics and anorexics, and I was in individual therapy. I gained 10 pounds by the end of high school, so my parents felt comfortable with me going away for college. College was stressful, especially while navigating food options. I just couldn’t eat much of the food offered in the dining halls. Most people gain the freshman fifteen, but I lost it, and my weight went back down to 85 pounds. I went back to therapy, but I was still anorexic during and after college.

After I graduated from college, I continued to see a therapist weekly. During this time, I came upon a self-help book titled, Making Peace with Food by Susan Kano. It’s a workbook that helped me manage my relationship with food. I also began journaling at the same time. Upon reaching my 25th birthday, I decided to get a master’s degree in public health at Emory University in Atlanta. And that’s where my relationship with food greatly improved. I simply did not have time nor energy to put into obsessing about food as my brain was 100 percent engrossed in graduate school, making new friends, navigating a new city, living alone for the first time, and sleeping, Yes, I still ate healthily; yes, I still cooked my own meals; yes, I still exercised, but all of it was what I would call “normal”. That’s not to say that I still don’t have food issues and body image issues, but I’ve been able to maintain a healthy weight for the past quarter-century.

Even as I got control over my eating disorder, I began to recognize the damage it had done. I saw a flyer in a bathroom at Emory looking for participants in a clinical trial where you get paid $50 to pee in a cup, and it can tell you if you have high bone turnover, which is a risk for osteoporosis. Doctors for all these years had told me, “You’re going to have osteoporosis, or you may already have it,” so I thought it would be interesting.

Actually, it was terrifying. The results showed that my bone turnover was just off the map. Because of that, when I was 27 years old, I got my first DEXA scan, a non-invasive test that measures bone mineral density to assess if a person is at risk of osteoporosis or fracture. The scan found that I had osteoporosis in my hip and osteopenia in my spine.

It was bad. The doctor basically said, “The next time you pick up a bag of groceries your wrist is going to shatter because you have the bones of a 90-year-old.” I got a stress fracture in my foot that took not 6 weeks—like a normal person’s would—but 8 months to heal. I was done with anorexia, but I had these lasting effects.

I tried different medications, but they were unpleasant, so my doctors mostly kept me on oral contraceptives in hopes that those would help maintain my bones. When I was about 30, I started getting interested in weight training and I have kept that up. My focus now is on being strong, at a healthy weight and eating foods I enjoy, but in moderate portion sizes. I still do all kinds of exercise, and although I don’t take supplements, I eat a lot of calcium and I’m a sun worshipper, so I get lots of vitamin D. But I’m always worried about fracturing something. Whenever it snows, I get very afraid I’m going to slip and fall and so I take extra precautions—I walk in the grass, or if I’m on a sidewalk I walk sideways because that gives me better stability. I keep my knapsack on both shoulders so I have even weight and both of my hands free. Other people just walk outside with shoes that have no traction, but I never do that.

In all, I’ve had three stress fractures in my feet. In 2009 I tripped at work over a carpet and did this superman thing that felt like I was flying for about 20 minutes. My entire body landed on my right hand, and I broke the fifth metatarsal, which is very common in boxers. My doctor asked who I got into a fight with. Still, that was high trauma—that was not just picking up a bag of groceries.

I’ve been really lucky—I had a DEXA scan in my mid-40s that showed a surprisingly big improvement in my bone density. I thought, this is not my scan; I think they mixed up the files. But it was real—I turned 36, 38, 43, 45, and my bone density just kept getting better. My last scan was in 2016, and I just have really, really mild osteopenia in my hip and nothing in my spine.

Osteoporosis awareness is still low—often, someone suffers a minor fracture, and they just get a cast and move on. Not all health care professionals may know to order a bone health assessment. When you think about hypertension, it took two or three decades to get all doctors to screen for it.

As informed women and patients, we just have to be persistent in advocating for our health. And I would have benefited from understanding how my choices as a young adult could affect my bone health for the rest of my life. This is why I’m sharing my story.

The group American Bone Health has resources to help adults calculate their risk for fractures as well as information about building healthy bones in kids and young people.

The Alliance for Eating Disorders Awareness is a national non-profit and has resources to help with education, outreach, early intervention and advocacy for all eating disorders.