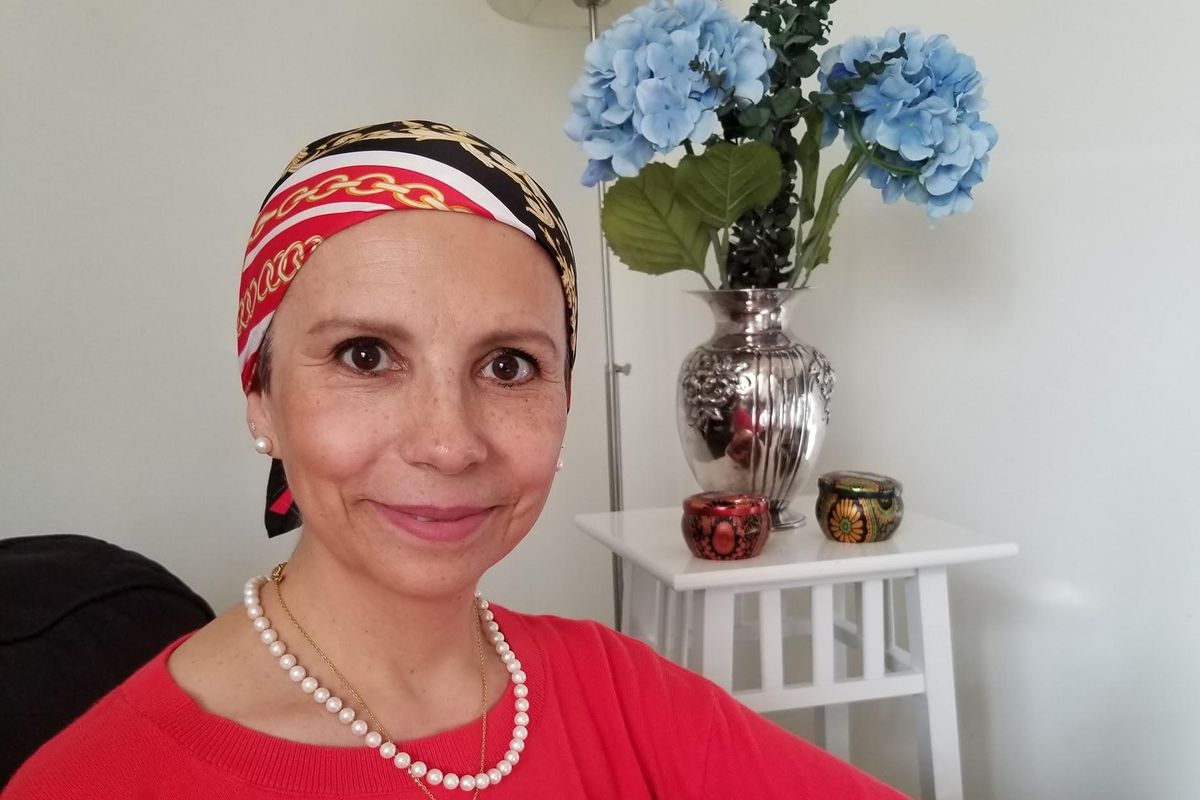 When my breast cancer spread to my bones, I realized it was time for a more holistic approach. Now I'm living my best life ever.

When breast cancer runs in your family, as it does in mine, you learn early on to be extra vigilant. I had my first screening mammogram at 40 and regularly conducted breast self-exams. Nothing worrisome turned up, until one day when I was 50.

During a routine self-exam in December 2018, I discovered a painful lump in my right breast and another under my right armpit. I scheduled an appointment with my OB-GYN who saw me immediately and ordered a diagnostic mammogram.

When the results were in, my OB-GYN did not explain them personally but instead sent them to me with a note telling me to speak with a breast cancer specialist. I read that the BI-RADS (breast imaging reporting and data systems) marker was 6, but it was left to me to figure out what that meant. I soon learned that a BI-RADS marker of 6 was the highest possible number and a sure sign of cancer. After more tests — including imaging and a biopsy — it was confirmed: I had breast cancer.

It was triple-negative breast cancer (TNBC), which makes up about 10% to 20% of breast cancers and is known to be particularly aggressive and fast growing. The survival rate tends to be lower with TNBC than with other types of breast cancer. TNBC is also likely to be metastatic — meaning it's prone to spread to other parts of the body.

As much as my husband and I dreaded my diagnosis, we weren't intimidated by it. I loved my oncologist, not just as a doctor, but as a person. Like me, he is a Colombian based in Florida. He explained my diagnosis and treatment plan competently, yet comfortingly — and all in Spanish, which was key, as that is my preferred language.

Further tests and scans revealed that my TNBC was metastatic. The cancer in my right breast had spread to my lymph nodes. Because of this and the fact that the cancer was triple negative, my doctors and I decided on an aggressive treatment plan: chemotherapy and a bilateral mastectomy. After that, we would reassess.

I was anxious to get started. I wanted to take the monster that is cancer down and get my life back.

With the chemo came the common chemo woes like nausea, fatigue and insomnia. It was challenging but, compared to the horror stories I'd read from cancer survivors, I felt I was one of the lucky ones.

Looking back now, I see it differently. Though still grateful for the care I received, I believe I was suffering more than I needed to be, and that things could have been easier.

And I say this even though I'm arguably sicker today than I was back then.

Over the next six months, I would undergo more chemotherapy and 25 rounds of radiation. Finally, in October 2019, my treatment was over — but not for long. Six months later, we learned that the cancer had metastasized further. Now, it was in my bones.

As I tell you this, it is still in my bones.

"I want to do it differently this time," I told my oncologist when he laid out his plan for chemotherapy along with immunotherapy. "I have been reading about alternative medicine, and I'd like to try that, in addition to the drug therapies you recommend."

It was as though I had whispered some secret password. My doctor's eyes lit up.

"I can help you with that," he said. "I have a master's in alternative medicine, but when I practice in this hospital, I can't suggest it. I can only discuss it if the patient asks."

I didn't feel betrayed by him so much as I did by the hospital system. Why were they not avidly sharing natural remedies that could help? To this day, it makes no sense to me, but I am compelled to tell other women: Ask about alternative medicine — not as a replacement to drug therapies but as a supplementary enhancement. And ask sooner rather than later.

My oncologist connected me to an alternative medicine specialist in Colombia who runs a palliative care program for cancer patients. I signed up for the program on the spot, intrigued by its focus on mind, body and spirit. I began to practice meditation, switched to an organic diet, and started exercising every day. For the spiritual aspect, I reconnected with my Catholic religion.

To be clear, I did not replace or override the cancer treatments my oncologist in Miami planned for me. Additionally, I run everything in the program by him. This is important because some herbs can interfere with cancer drug therapies. So far, the palliative care course pairs beautifully with my chemo and immunotherapy treatments — and the changes in my quality of life have been profound.

What do I do differently? Everything! If I'm restless at night, I do guided meditation. If I'm nauseous, I drink ginger tea. If I'm bored, I don't hop on social media like I did before; I disconnect and turn inward with meditation.

I've overhauled my diet. I've said goodbye to fast food and processed food and many traditional Colombian dishes that are heavy on carbs. I eat 100% organic, don't go anywhere near any form of sugar or flour, and only use pink Himalayian salt. At my chemo sessions, I politely decline the lunch the lovely nurses offer me: the white-bread sandwiches and sickly sweet cranberry juice.

Perhaps the most radical change I've made is to implement fasting in my life. Research has shown that fasting may enhance chemo's cancer-fighting abilities. I'm part of a study led by my Colombia-based doctor to learn more about the effects of fasting during chemo. My long-term goal is to achieve 72 hours of fasting four times per year to reset my immune system. I currently fast 18 to 22 hours every day, which lessens the secondary effects of my chemotherapy. I love it. I feel energized and focused.

All these tips and tactics were totally foreign to me before my second bout of cancer. But once I embraced these changes, I realized all I'd been missing out on before, namely, a sublime sense of peace. There is still pain and discomfort, but it is so much lighter now. It's as though the color of my aura has changed from a cloudy gray to a bright and blue, sun-lit sky. I feel a sense of ownership over my illness (and over my health) that I never knew was possible.

I am responding well to my treatments so far, and soon I'll know if the cancer is once again gone. But I'm less focused on the end goal these days. I am in no rush. Every day, I wake up grateful to be alive.

And if this is my last day? Well, that day I say, with open arms: "Gracias Dios por esta maravillosa vida." (Thank you, God, for my wonderful life.)

This resource was created with support from Daiichi Sankyo, Merck and Sanofi Genzyme.