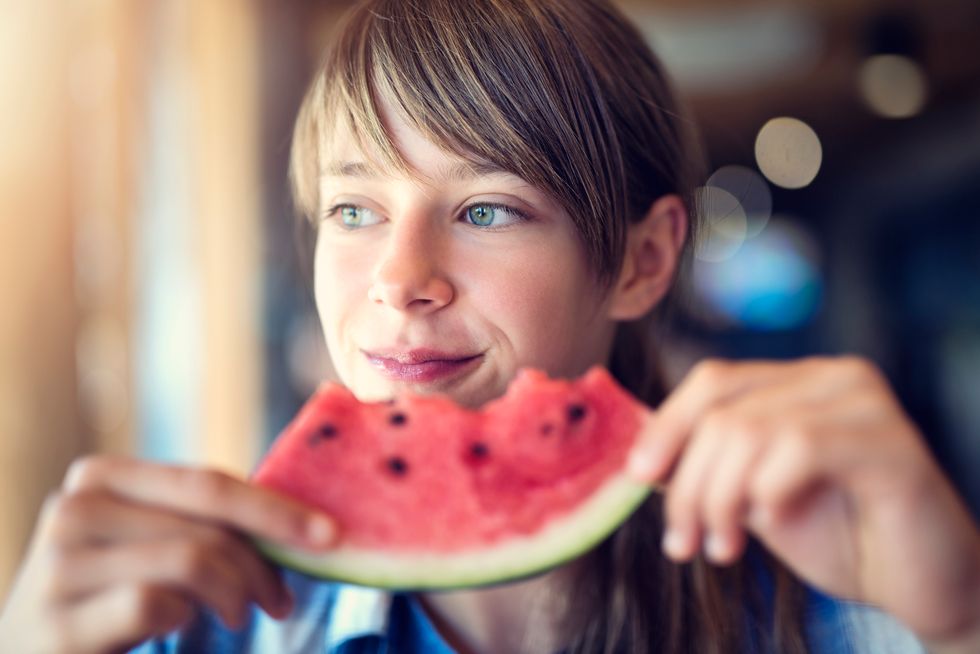 The Wonderful Truth About Watermelon

The Truth About Watermelon

Watermelon is a perfect summer food: refreshing, nutritious, hydrating and delicious. It also has antioxidants to help protect your cells from damage. And that's not all!

How could you not? It's sweet, refreshing and juicy and practically spells summer. Watermelon, a cousin to squash, cucumbers and pumpkins, comes in five main types: seedless, seeded, mini (or personal, which have thinner rinds), yellow and orange.

But watermelon adds up to more than just water and sweetness. During its growth, which takes about 90 days, it's busy producing lots of nutrients—substantial amounts of vitamin A, for healthy skin and eyes; vitamin B6 for immune function and brain development in pregnancy and infancy; and vitamin C, which can boost immunity.

And that's not all: This nutrient-dense fruit contains more lycopene than any other fresh fruit or veggie, a powerful antioxidant which gives it its red color and may aid in sun protection. It also contains an abundance of other antioxidants and amino acids, which help your body function optimally by helping to maintain blood flow. There's potassium and a low amount of sodium, too.

If you're watching your weight, you can indulge guilt-free. A cup will only set you back 40 calories. And because over 90 percent of this melon is water, it's super-hydrating. An average 15- to 20-pound watermelon will yield about six cups of juice and 11 cups of fruit.

Watermelon makes a great snack. It's easy to slice or dice and toss in a container. And here's a tidbit you might not know: you can use the entire watermelon (even the rind), which is edible and sometimes used as a vegetable that can be stir-fried, stewed or even pickled.

If you've waited too long to use it and your melon is overripe, don't toss it. Instead, juice or puree it and still reap the nutritional benefits. And after you scrape the rind clean, you can use it as a compostable bowl filled with fruit salad. If it's a big watermelon, it can hold a lot—but it might not be as big as the one recorded in the Guinness World Records, which weighed in at 350.5 pounds.

Wondering how to pick a perfect melon? Carefully look it over to see that it's firm and symmetrical and free from bruises, dents or cuts. When you lift it, it should be heavy for its size. Check the underside. There should be a creamy, yellow spot from where it sat on the ground and ripened. Most melons, from the time they're cut from the vine, have a shelf life of about three to four weeks.

Research points to the benefits of increasing consumption of plant foods to help decrease the risk of obesity, diabetes, heart disease and overall mortality. We say watermelon should be on the top of everyone's list!