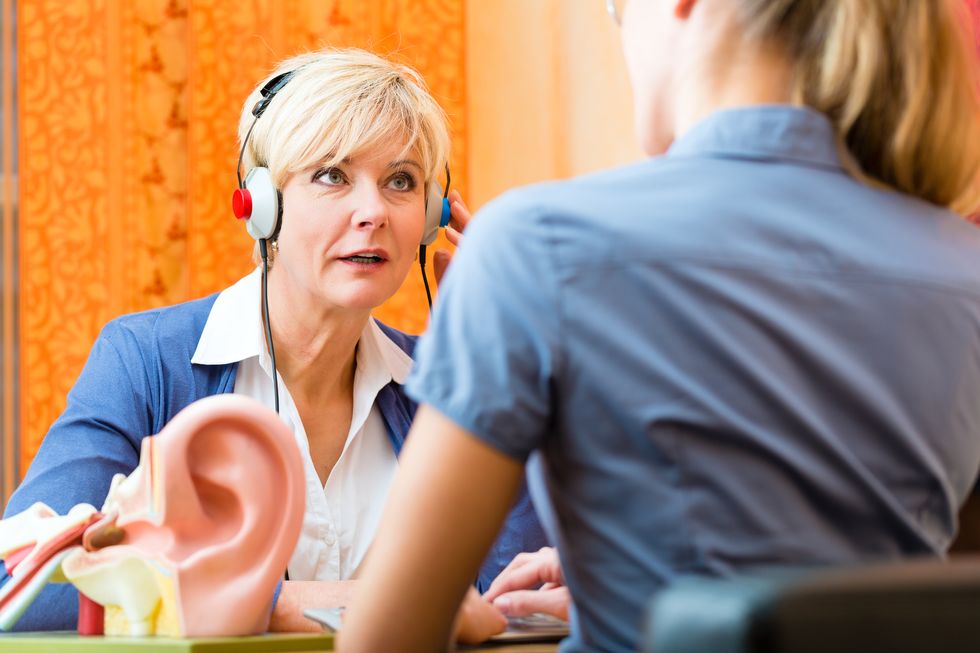 Say What? Menopause and Hearing Loss

If you find yourself turning up the volume or asking people to repeat themselves, you may be experiencing hearing loss. And you're not alone.

Do you find yourself missing words (or entire conversations), asking the waiter or waitress to repeat the evening's specials, turning up the radio or TV, or losing the ability to follow a conversation in a noisy room? Then you're among the one in five Americans over age 12 who has trouble hearing.

And if you're a woman around menopause, hearing loss may be just another thing you're dealing with. Because that's when it usually appears.

A 2007 study cited evidence for the role of hormone replacement therapy in having a protective effect on hearing impairment in postmenopausal women, suggesting that the hormones (estrogen or an estrogen/progesterone mix) were protective to the inner ear. The fact that women are less likely than men to experience hearing loss further supported that theory.

But now, newer research finds something different about the hormones that are blamed for everything from hot flashes to depression. It was found that the use of oral hormonal therapy in postmenopausal women was correlated with a higher risk of hearing loss. The same applied to the prolonged use of oral estrogen (10 years or longer of use) and to women who went through a later menopause (even though the average age is 51, the researchers found that women who went through it at age 50 or older, as opposed to prior to age 50, had a 10 percent greater risk of hearing loss).

Ah, studies. You buy into one and seemingly moments later you turn around and the findings are reversed. More research is needed to figure out this very complicated relationship, but in the meantime, if you have trouble hearing, listen up.

How you know you have hearing loss. (Do any of these sound familiar?)

Besides age or heredity, hearing loss can be caused by a viral or bacterial infection, a heart condition or a stroke, head injuries, tumors and certain medicines including some antibiotics, diuretics and cancer drugs. A build-up of ear wax, which is reversible, can also interfere with your hearing.

Hearing loss usually happens over the years. Although experts don't know why it affects some people more than others, it typically runs in families. It can also happen from exposure to loud noises (see below). If it's sudden, it usually occurs over a period of 72 hours or less. Some causes include Lyme disease or autoimmune and circulatory disorders.

If you, like me, attended rock concerts in your youth, chances are you damaged your hearing. My first concert was at Westbury Music Fair. I was practically in a trance listening to Diana Ross and the Supremes, with Little Michael Jackson as the warmup guest (fabulous, right?). From that point on, I was hooked and ramped up my concert-going: the Grateful Dead, Chicago, the Doobie Brothers, the Allman Brothers, the Beach Boys and so many more.

I always left elated, but there was something else I left with: ringing ears that serenaded me for a few days. Now, years later, my right ear rings permanently—that's known as tinnitus, a common problem and symptom of age-related hearing loss, which is more common in people over age 60. There are many causes of this type of hearing loss, but one that rings true (pun intended) to me is exposure to loud noises.

What's age got to do with it?

Aside from sitting at one-too-many rock concerts or any other long-term exposure to loud noises, over time your delicate inner ear structures (known as presbycusis) degenerate, which leads to problems hearing high-pitched sounds. Other contributors may be changes in the blood flow to your ear, damage to the nerves responsible for hearing and changes in how your brain processes sound and speech. Also, smoking, poor circulation and diabetes can contribute to age-related hearing loss.

If this makes you feel any better, you're in good company: When I go out to dinner with friends, I'm not the only one uttering, "Say what?" About one in two adults over age 65 are dealing with hearing loss to some degree.

How is hearing loss treated?

Although there's no cure for age-related hearing loss, there are things you can do to help improve your hearing and your everyday quality of life.

Let's admit it: I know as well as any of you that so many of us boomers are hesitant to wear a hearing aid. We have fun with whimsical, colorful or fashionable eyeglass frames, but hearing aids … not so much. They're stigmatized. I'm no engineer, but I'll bet if someone came up with a hearing aid that looked like a really cool earring or ear-accessory, more people might wear them. (Someone? Please do this.)

There are many types and styles of hearing aids. One type, known as a BTE, is worn behind the ear, connected to a plastic piece that sits inside the outer ear. A newer type of this version, known as an open-fit hearing aid, is attached by a narrow tube that fits into the ear canal. Others include in-the-ear (ITE), in-the-canal (ITC) and implantable aids, which are attached to one of the bones of the middle ear. Cochlear implants, which are surgically implanted in the inner ear, can help people with profound hearing loss.

Assistive listening devices can amplify sounds. There are many that range from devices to amplify your phone or television (like this ZVOX AccuVoice AV200 Sound Bar) to those designed for large facilities like classrooms, theaters or airports. Click here for more information.

Read more about Why Access to Hearing Aids Needs to Improve.

In the meantime, do these things to preserve the hearing you have.

If you know you'll be exposed to loud noises, wear earplugs or even earmuffs (I unashamedly brought earplugs with me to recent Springsteen and Paul McCartney concerts. I learned the hard way, but at least I learned. I refused to feel self-conscious. Who is looking at me, anyway?)

If you use headphones or earbuds, keep the volume down to a "sensible" level.

Have annual hearing exams and, if you need it, get appropriate treatment. There is a school of thought that says your brain, if kept attuned to signals from your auditory nerves, can help slow hearing loss.

If you smoke, quit. And don't expose yourself to second-hand smoke either: these can both increase the likelihood of hearing loss, according to research.

P.S. Here's a study you might want to pay attention to: Researchers know that diet can be protective against things like high blood pressure and inflammation, so they wondered if it could have an influence on hearing loss, too. Their Nurses' Health Study II, which spanned the years between 1991 and 2013, found that women who followed a healthy diet had a lower risk of moderate or worse hearing loss. Another reason to eat your fruits, veggies, nuts, lean meats and low-fat dairy, and limit sodium, sugar and fat!

Women in the Middle