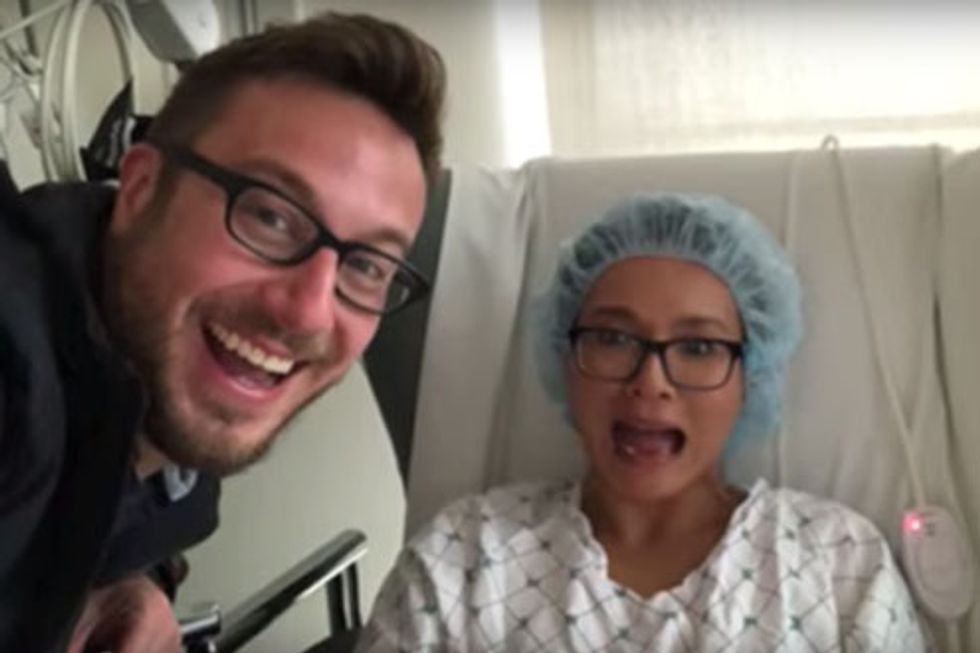 Finally Pregnant! This is Our Story of Living With Unexplained Infertility

Finally Pregnant! This is Our Story of Living With Unexplained Infertility

But after more than six months went by with no pregnancy, I think both of us started to get anxious. After a year had gone by with no pregnancy, we started to think something was wrong. So, we scheduled an appointment with a Reproductive Endocrinologist at the UCSF Center for Reproductive Health to get checked out. I had my sperm analyzed, while Ying had to endure a battery of tests, scans, and bloodwork in order to fully evaluate her reproductive system. Everything came back normal, meaning the diagnosis was "unexplained infertility," which is exactly what it sounds like: there was no obvious explanation for why we were having trouble getting pregnant.

In many ways, this was a more challenging revelation than if we had found out that I had a low sperm count, or if it were anything else known and treatable. At least when there is a clear diagnosis for the infertility, doctors know what to do to treat it. But in our case, all we could do was follow a protocol of escalating medical intervention until hopefully, something worked. Some couples decide to go straight to in vitro fertilization (IVF) for a number of reasons, but we wanted to at least try less invasive, less expensive options first.

However, none of those less invasive treatments worked for us, and our anxiety started increasing. We started imagining all the possible reasons for why pregnancy just wasn’t happening. Ying worried that she partied too much in college and that this was her body’s way of getting back at her. I worried that maybe I drank too much coffee every day, or that the weekend beers were ruining my sperm.

Dr. Google and the army of armchair infertility specialists on the internet became our worst enemy. Ying started looking into a variety of different allergies and conditions, thinking that she could find the culprit and take care of it herself. The self-diagnosis went from gluten allergy, to soy allergy, to cold uterus, to endometriosis, and finally to "leaky gut." When she told our doctor that she had narrowed the problem to having a "leaky gut," his perplexed response was, "a leaky what? Go home, try to relax, and have a glass of wine." It broke my heart to watch Ying struggle to gain control over a situation that was completely out of our control.

Eventually, we reached the point during the slow and torturous journey of uncertainty where we were finally ready to begin IVF. A single round of IVF typically costs tens of thousands of dollars, but thankfully, my health insurance was able to cover one round; after that, we’d be on our own. Multiple rounds of IVF aren’t uncommon; we were told that in our case each embryo transfer had a 50-60% chance of working. But before you can even transfer an embryo, you have to retrieve enough high-quality eggs from the woman, fertilize them in a laboratory, and then hope that enough of the fertilized eggs grow into 5-day-old blastocysts so they can be transferred to the uterus one at a time (or sometimes 2 or more at a time).

Getting to healthy embryos is a long, difficult process that weighs heavily on the hopeful mother-to-be. Every night for almost 2 weeks, Ying had to inject herself with an arsenal of hormones that would cause her ovaries to go into overdrive, producing double-digit numbers of eggs. Then, in an outpatient surgical procedure, doctors had to retrieve the mature eggs before fertilizing them with my sperm, one by one, in a laboratory. Even after all of that, there was no guarantee that the process would result in healthy embryos, so finding out that we ultimately had 6 healthy blastocysts was cause for celebration.

For us, the hardest part of all was the waiting that came after the embryo transfer. Both of us pored over infertility forums, trying to match the signs and symptoms Ying was experiencing with a positive result that someone else had. We began to learn the shorthand that other people online would use when talking about fertility treatments; "8dp5dt af symptoms bfp" translates to "8 days past 5-day-old blastocyst transfer, aunt flo symptoms, big fat positive" which really means, "has anyone else experienced spotting or cramping 8 days after their embryo transfer but still gotten pregnant?"

The first embryo transfer failed. After everything we had been through, it was devastating.

Friends around us continued to announce their pregnancies, and a sense of panic started to set in. What once seemed impossible was slowly becoming a reality: the idea that we might never be able to bring our own children into this world. We were terrified.

But we never lost hope, and we tried again. And on December 20, 2018, our lives changed forever. Right after I got home from work, Ying surprised me with the positive pregnancy test. The sense of relief and pure joy overwhelmed me, and I collapsed into tears. Ying told me that she had a similar reaction when she saw the results for the first time earlier in the day by herself. That day was the happiest day of our lives, but we know that will change once our daughter is born.

To anyone currently struggling with infertility, our hearts go out to you. We know how difficult and scary it can be, especially when it seems like there is no light at the end of the tunnel. Stay strong, and know that you’re not alone.

Jon Laws is a Baltimore native currently living in San Francisco. He is a marketing professional and a hobbyist musician, DJ, and artist. Learn more about him here.