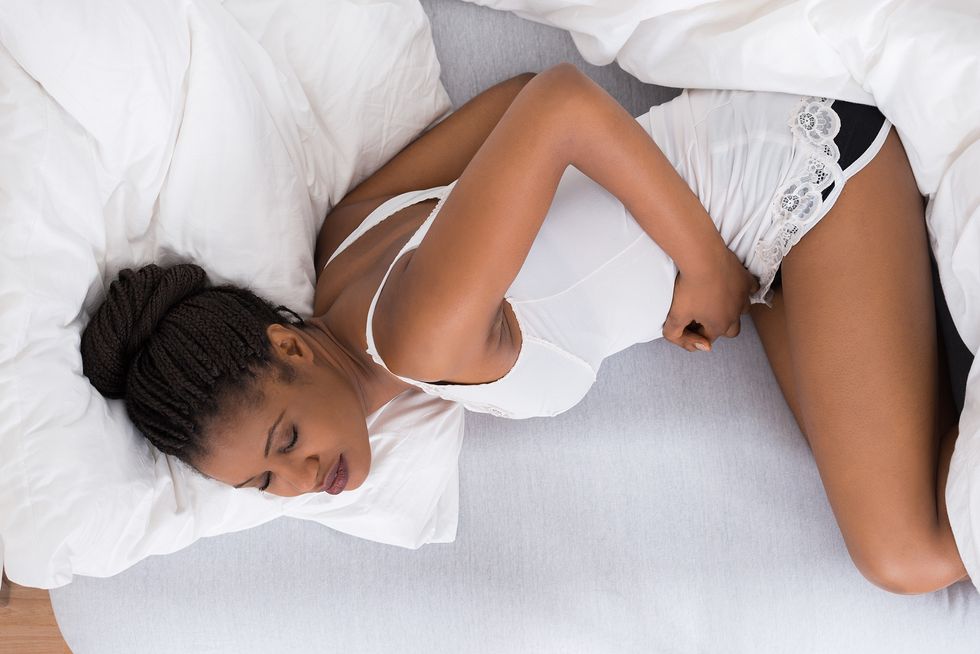 Uterine fibroids can cause heavy menstrual bleeding, pelvic pressure, frequent urination and back pain but some cause no symptoms. If you notice an unusual lump, get it checked out.

This article has been archived. We will no longer be updating it. For our most up-to-date information, please visit our fibroids information here.

I knew very little about uterine fibroids until I walked out of my health care provider's office in August 2014. Even though I showed no symptoms other than a barely noticeable lump, I learned I was carrying around a cantaloupe-sized tumor that seemed almost hidden in my body.

Fibroids, also known as leiomyomas, are benign tumors that develop from the smooth muscular tissue of the uterus, and are the leading cause of hysterectomy.[1] Their growth is fueled by estrogen, making women in their reproductive years more prone to them. As many as 20 percent to 50 percent of women live with fibroids,[2] with African American women about three times more likely to experience fibroids than white women.[3] Many women never experience any symptoms,[2] which can include heavy menstrual bleeding, pelvic pressure, frequent urination and back pain, to name a few.

The type of fibroid can influence symptoms. Different types of fibroids include submucosal (growth into the uterine cavity), subserosal/pedunculated (outside, but connected to the uterus) and intramural (inside the wall of the uterus). The location, size and number of fibroids can also influence a woman's symptoms, or lack thereof.

Most fibroids are not cancerous—more than 99 percent, in fact.[4] While the exact cause of uterine fibroids remains unknown, researchers and clinicians point to genetic changes and hormones. If a woman's mother had fibroids, she is three times more likely to have them. Research also shows that women who are overweight or who eat a lot of red meat are more prone to develop fibroids.[5] Currently, there is no way to prevent fibroids.[6]

Here's how I discovered my fibroid. In the summer of 2014, I was lying down and noticed a large bump on the right side of my stomach. I tend to be fascinated by health issues and I'm not a worrier, so I assumed it was food moving through my digestive system. However, I called a friend who is a nurse practitioner and she advised me to "watch and wait." The protrusion was never visible when I was standing, only when lying down. After two months of watching and waiting, I made an appointment to see an internist.

After examination, I was sent for two ultrasounds. From there, I was advised to see a gynecologist and received my diagnosis: I was toting around a three-pound, cantaloupe-sized pedunculated fibroid. I was told to schedule surgery and plan for three nights in the hospital and six weeks of recovery. I would be having the equivalent of a cesarean section.

My thoughts were scattered; the possibility of the fibroid being cancerous came up, as did the possibility of needing a hysterectomy or a blood transfusion. I scanned dozens of peer-reviewed medical journal articles and medical websites and had many conversations with friends who are in the health care field—all of which left me reassured that I'd be fine.

In December 2014, I had the surgery and enjoyed my six weeks of recovery. I healed rather quickly, did not experience any complications and am now three pounds lighter!

I share my story of discovery, treatment and recovery to encourage other women to advocate for their health. If you notice something abnormal, whether it is a new mole, unusual fatigue or a fibroid protrusion, be your own advocate. Ask questions. Get answers.

The Society for Women's Health Research encourages all women to be their own health advocates and understand how they play an important role in their health care. Learn more about the work we do by visiting our website.

PVFD: Think of It as Vaginal Varicose Veins