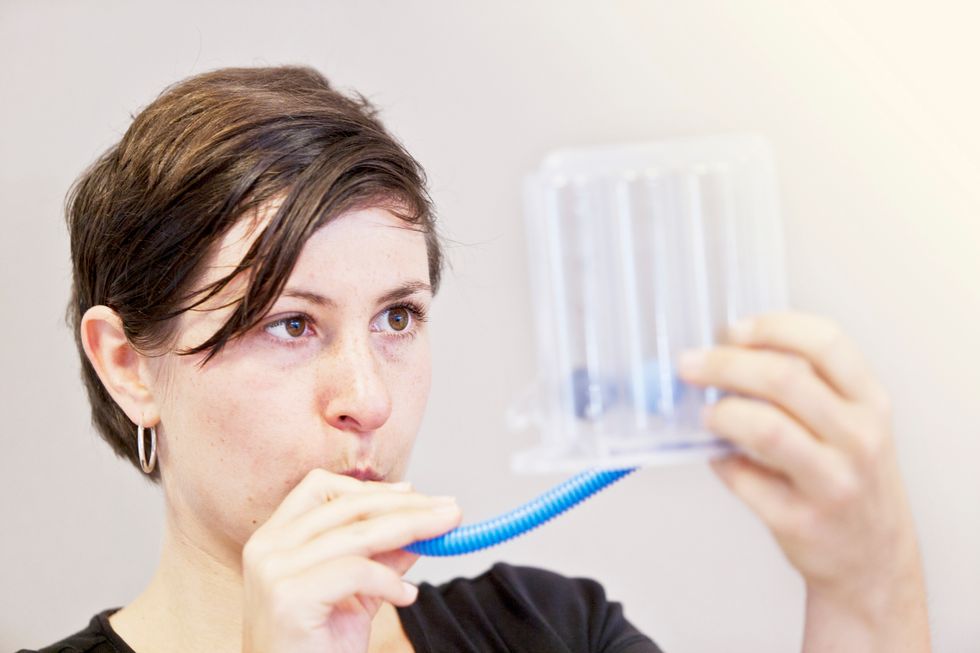 She should start getting her affairs in order, because she only had three to five years left due to her incurable lung disease. Expect to be hospitalized and on full-time oxygen support within a couple of years.

"If you can think of a better way of demoralizing a patient than to tell them those things, I can't imagine," said her husband, the award-winning newsman Ted Koppel.

That was 16 years ago. Despite her downer doc, Grace Anne remains very much alive, active and happy.

The Koppels want all COPD patients to know that while there is no cure, they still can experience a long and full life. The lung disease can be effectively managed through medications and lifestyle.

So COPD patients should keep their hope alive, because their voices are desperately needed, the Koppels added.

COPD needs better funding, both for research and for treatment. But the disease has been largely ignored—in part because patients are too downhearted to speak up.

COPD is the nation's third leading killer, after heart disease and cancer. About 150,000 Americans die every year from the disease, which causes a progressive loss of lung capacity and airflow.

Overall, about 30 million people in the United States have COPD, with about half of them suffering symptoms but remaining undiagnosed, according to the COPD Foundation.

To draw attention to COPD, Koppel interviewed his wife for a report that aired on CBS's "Sunday Morning" last month.

Koppel noted that COPD ranks 155th in research funding at the U.S. National Institutes of Health.

"Diabetes, which kills 75,000 people a year, desperately needs research money and they get somewhere in the neighborhood of $1.1 billion a year," he said. "COPD, which kills twice that many—150,000—gets less than one-tenth that amount in allocations."

Grace Anne knew something was wrong with her health one hot summer day in 2001, when she found that she had to stop walking every few feet to catch her breath.

She went to her family doctor for a physical, but the doctor did not connect the dots that would have led to a COPD diagnosis.

Even though she had quit years earlier, Grace Anne was a former smoker. She also had a history of respiratory infections, including one that landed her in the hospital.

"These should have been clues that I was susceptible to developing lung disease, but these clues were not recognized," she said.

Her breathing continued to worsen, and a month later she collapsed. A major medical center tested her breathing and found that she only had 26 percent of her expected lung function. That's when the doctor told her to essentially draw the shades.

Grace Anne instead decided to fight for her health, aided by a pulmonary rehabilitation program prescribed by her lung specialist.

"It changed the course of my life," she said of the program.

Such a rehab program educates people about COPD, shows them how to exercise to improve lung function and change their diet. It also teaches people how to recognize changes in breathing that herald a sudden worsening of symptoms that amount to a "lung attack."

These programs often encourage walking, biking and lifting weights in moderation, while discouraging sodium in the diet, because it can cause fluid retention and impair breathing. Overeating is also a bad idea, since any resulting gas can also make breathing more difficult.

The lessons of pulmonary rehab, combined with medications that effectively improve breathing, have allowed Grace Anne to regain and maintain a large amount of her lung function.

Helping Others With COPD

Inspired by her success, the Koppels helped co-found 11 pulmonary rehabilitation clinics in areas of high need around the United States.

"Only 3 percent of all COPD patients are able to take pulmonary rehab. Without a cure, that's the best hope we have right now," Grace Anne said. "If you take the program and practice what you've learned, you can have a good, full, active life."

"The American Lung Association is advocating for more liberal funding for pulmonary rehabilitation, and we believe the scientific evidence of its efficacy is strong," Edelman said. But, "it's not clear how often you need to repeat it. We need to improve the science and eventually we'll need to improve the funding."

"The medical community is largely responsible for imbuing COPD patients with a sense of futility," he added. "'There's nothing we can do for you. You have an incurable disease. You're going to die.' They say those things rather than saying, 'Look, it's incurable but it is imminently treatable.'"

COPD Not a Blame Game

Part of the problem likely is that doctors and society at large blame COPD patients for their own illness, since many develop the lung disease as a result of smoking, the Koppels said.

However, one-quarter to one-third of people diagnosed with COPD have never smoked, Grace Anne noted. You also can develop COPD if you had a job where you regularly inhaled harmful pollutants or lung irritants, and some people even have a genetic predisposition that brings on the disease.

"It's really not just a smoking issue," she said. "Anyone who is smoking should stop, there's no question of that. But we have this very large group of people who have not smoked. They are sharing the stigma of those who did smoke."

Ted Koppel argues that blaming the victim is no way to treat disease, whether you're talking about COPD, opioid addiction or AIDS.

"You don't go waving a McDonald's bag in front of every heart patient," he said. "This notion of painting people who are suffering with a brush of personal guilt is just a despicable way of dealing with disease."

Experts with the American Lung Association have had long discussions about victim-blaming, Edelman said.

People with COPD have all the hope knocked out of them, Koppel said. "These become people who end up sitting there, many of them on oxygen, many of them depressed, many of them overweight, many of them with co-morbidities like heart disease, and they don't have sufficient hope to generate the energy to become a political force," he explained.

"I'm hoping that what we can do is light that spark of hope, and give them a sense that what they say has some meaning," he added. And with renewed hope and a sense of optimism, patients and their loved ones can lobby for more money for research and treatment of COPD.

Understanding and Using Your COPD Medications