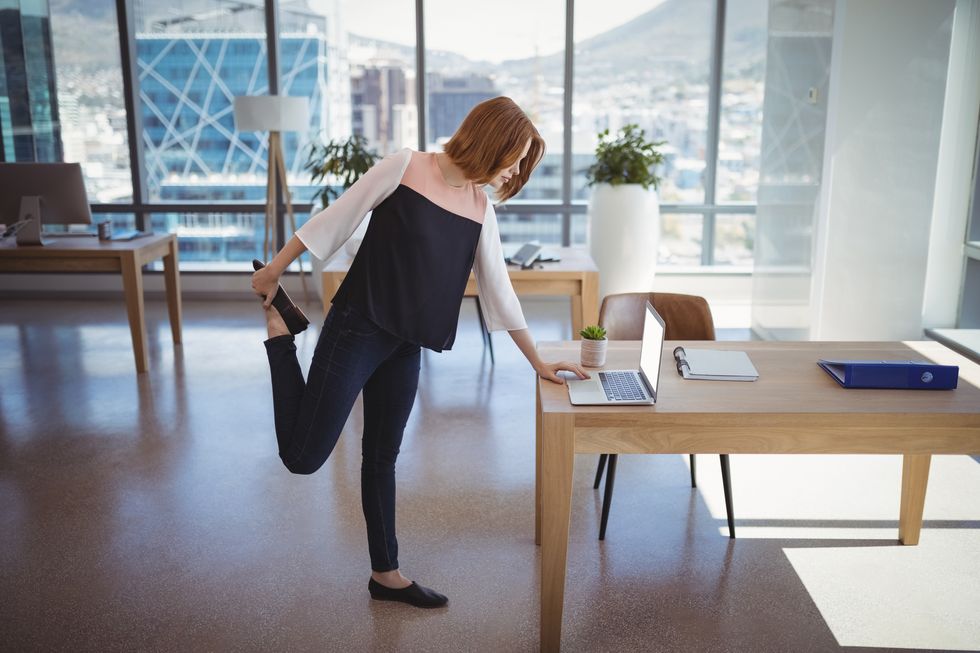 Stand Up: Our Bodies Are Meant to Work Against Gravity

Stand up and take a break from sitting to help fight the aging effects of inactivity. When you stand and move around, gravity works in your favor.

Recently I had the privilege of interviewing Dr. Joan Vernikos for my podcast series "Fullness of Midlife," which are conversations with interesting people about health, love, life and meaning. Dr. Joan was director of Life Sciences at NASA until 2000 when she "retired" to write and speak (some retirement!) about some of the groundbreaking research she had conducted from her special perch at NASA.

You can listen to the entire interview here, but I wanted to also distill the pertinent bits for readers.

As you might imagine, the effect of gravity, or lack thereof, is a fundamental concern for scientists at NASA. Astronauts are exposed to low-gravity environments, sometimes for months at a time, which has wide-ranging and deleterious effects on bones and organs, blood and cardiovascular systems. During her time at NASA, Dr. Joan specialized in the effects of gravity on the human system.

But here's the thing: Dr. Joan came to understand that gravity operates on earthbound humans in similar ways! When we are upright and moving around, we are subject to the full effects of gravity pulling us to the center of the earth vertically. But when we are horizontal, lying in bed, for example, gravity's pull is spread evenly throughout our bodies and is much less intense—similar to the experience of astronauts. "The changes that accompanied lying in bed … 24 hours a day … are very similar to those we see in astronauts. Granted, maybe a little less intense," said Dr. Joan.

Interestingly, these metabolic changes don't happen when we sleep at night. Normal sleep appears to have a restorative, "detoxing" effect on the body and the brain, which is also important to good health.

Since the few astronauts who spent time living in micro-gravity were harder to find than subjects willing to lie in bed, Dr. Joan began studying the effects of long stretches of time spent horizontally. She found, for example, that after about four days "very significant changes" began to happen in the way her subjects metabolized fluids, in the cardiovascular system, and in stress responses. Of course, as with astronauts, these changes mostly were reversed when the test subjects got up and walked around or the astronauts came back to earth, and gravity took over.

Then, Dr. Joan visited a friend's elderly mother who was bedridden, and she realized the low-gravity changes she'd been studying looked a lot like aging. Was there a link between our increasingly sedentary culture and the symptoms of early aging? Dr. Joan thinks that the chronic diseases of the elderly—diabetes, cardiovascular problems, obesity, bone loss and muscle wasting—are happening at younger ages, even in childhood, because we no longer allow gravity to do its work. We sit too much and move too little.

Dr. Joan hypothesized that the body is meant to move all day long, and in the not-so-distant past, that happened pretty naturally. Our grandparents "bent over and reached up and made beds and cleaned and washed and gardened. And went and bought groceries and walked home or rode a bicycle or whatever."

Following several studies, Dr. Joan believes that simply standing up is "fundamental" to countering the effects of inactivity. Standing and then moving around reverses the micro-gravity effects of lying in bed—or of aging.

Trouble is, we don't live like our grandparents. More likely, we sit for hours in front of one screen or another in the office and at home. Then, if we're disciplined, we might exercise a few times a week.

Exercising, while good in itself, isn't enough to counteract the effects of sitting around for hours every day. Our bodies are designed to move, to work against gravity. That—not sitting—is our normal state, the result of eons of evolution.

After her 2011 book, "Sitting Kills, Moving Heals," was published, a slew of new research supported the hypothesis she'd developed from her work at NASA: Long periods of inactivity have deleterious health effects.

"Sitting makes worse absolutely everything," Dr. Joan said. "Whether you're talking about cancer (prostate, breast cancer), cardiovascular conditions, stroke, metabolic conditions, diabetes, obesity—you name it, it makes it worse." (Here, for example, is NPR's report on recent studies of aging subjects. The conclusion? If you don't walk now, you might not be able to later.)

So, what should we do, especially if we're still working and chained to a desk all day—but even if we're retired and reading or knitting?

Fortunately, the solution is simple. "Stand up!" says Dr. Joan. Go to the watercooler, the bathroom, just take a break every 30 minutes or so. You don't need to hop on a treadmill or take a 30-minute walk, just stand up and move for a few minutes. You won't lose weight or tone your muscles with this regimen; it isn't meant to take the place of exercise and a healthy diet, but it's a good habit to develop if you regularly sit for hours every day.

Gravity is your friend, says Dr. Joan. Embrace it!