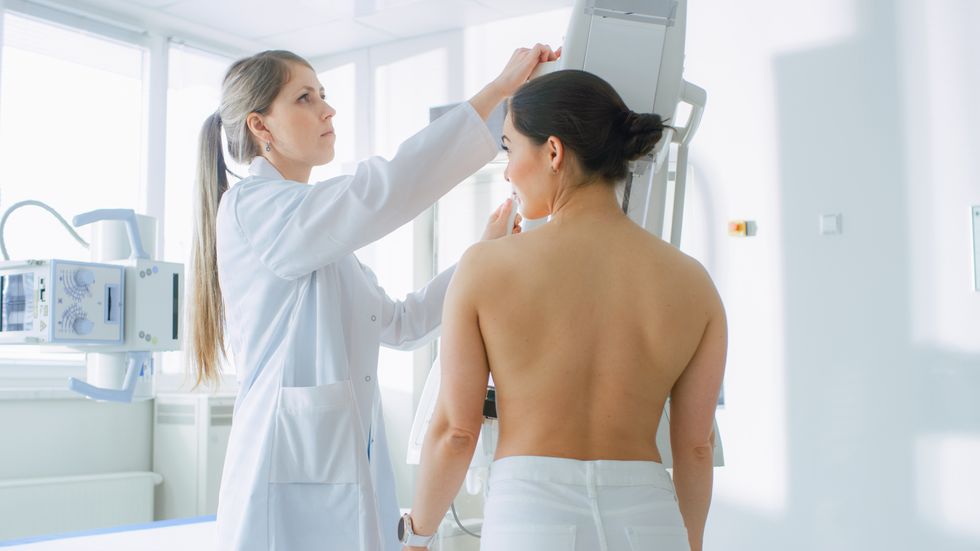 For Some Women, Mammograms May Need to Begin at 30

For Some Women, Mammograms May Need to Begin at 30

Women at increased risk for breast cancer should start receiving mammograms earlier than recommended, even as young as age 30.

Young women who have dense breasts or a family history of breast cancer appear to benefit from regular mammograms as much as women in their 40s do, researchers reported.

"Every woman by age 30 should have a risk assessment with their primary care physician or ob-gyn to see if they are at increased breast cancer risk," Lee said. "If there is family history, then maybe they should consider a baseline mammogram to determine their breast density."

But Lee said no one has really examined the benefits of starting breast cancer screening in a woman's 30s.

"So far, everyone is talking about screening women above the age of 40, but we're looking at a decade earlier because there's just not enough evidence out there," Lee said. "We're looking to see if younger women with certain risk factors may benefit from earlier onset screening mammography."

For this study, Lee and her colleagues analyzed data from more than 5.7 million screening mammograms performed on more than 2.6 million women between 2008 and 2015. The mammograms took place at 150 facilities in 31 states in the United States.

The researchers looked at women aged 30 to 39 with three specific risk factors -- dense breasts, prior diagnosis of breast cancer, or breast cancer in a first-degree relative (mother, sister or daughter).

The investigators compared the results of mammography in these women against mammograms given to women aged 40 to 49 without those risk factors.

Breast cancer was detected about as often in younger women with these risk factors as in women in their 40s, the researchers found.

They also determined that women in their 30s with breast cancer risk factors have to come back to the doctor for further testing and biopsy about as often as older women undergoing regular screening.

"Women with at least one of these three risk factors likely benefit from screening mammogram beginning at age 30, instead of age 40," Lee said.

The findings were to be presented Wednesday at the Radiological Society of North America annual meeting, in Chicago. Such research is considered preliminary until published in a peer-reviewed journal.

"The ACS guidelines for women at higher risk already recommend breast cancer screening before age 40 if a woman is a carrier of a known or suspected mutation on a breast cancer susceptibility gene, or if she was exposed to radiation treatment for childhood cancer," Smith said.

"Likewise, women and their doctors can make individual decisions. So if a woman has a family history in a first-degree relative diagnosed before the age of 50, it is not unreasonable for her to seek advice about whether she should begin screening before age 50," he said.

The U.S. Preventive Services Task Force recommendation on breast cancer screening also includes some flexibility, saying that the decision to start regular mammography before age 50 "should be an individual one and take patient context into account."

"If a woman has prior history of breast cancer, her regular exams are dictated by that experience," Smith said. "Any woman diagnosed with breast cancer will undergo regular surveillance breast imaging from that point forward."