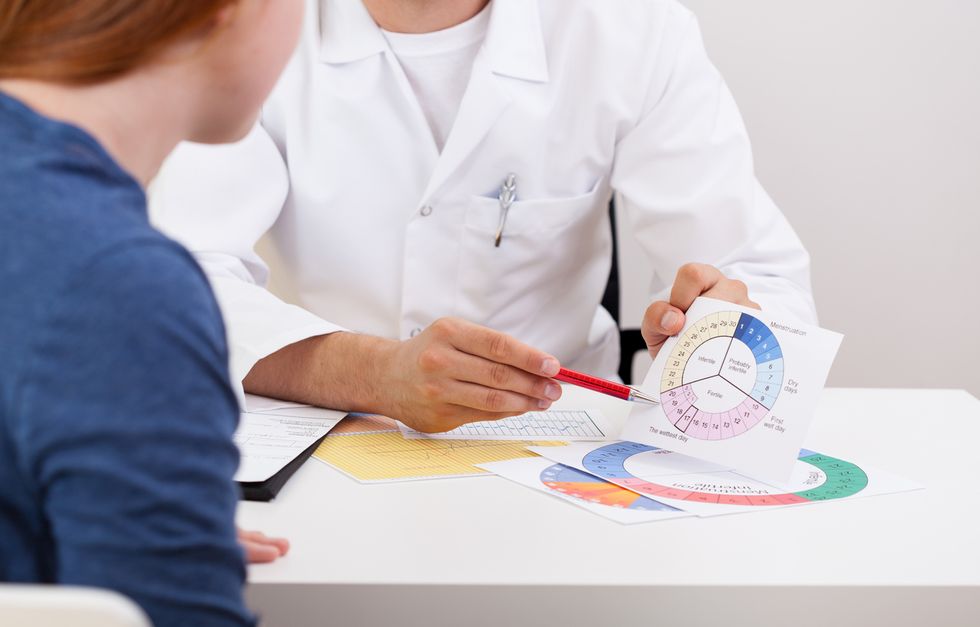 If you're trying to get pregnant, it may help you get pregnant faster if you know the signs that you're ovulating.

If you're trying to get pregnant, you likely have ovulation on the brain. Ovulation is the process where your body releases one or more eggs from your ovaries. Just like you learned in health class, if the egg is fertilized and implants successfully, you're pregnant. If you miss this ovulation window, you can't get pregnant.

Women can have different signs that they're ovulating, and some may not have any indicators at all. The timing of ovulation varies. For some women, it happens on a different day every month. For others, it's on the same day of their monthly cycle, like clockwork.

Many women think they ovulate on day 14 of their cycle. In actuality, that only happens if your menstrual cycle is always 28 days long. The average cycle is 28 to 32 days. And it can be shorter or longer.

You're actually most fertile and most likely to get pregnant for about a week: in the five or so days before ovulation, on the day you ovulate and on the day after you ovulate.

Your egg lives 12 to 24 hours after it's released. But sperm can swim around for days after you have sex. So, the more sperm you have inside you awaiting the egg, the higher your chances of conception. Read more about ways to boosts your fertility.

There's no foolproof method to detect when you're ovulating, but there are some signs. Whether you have several or just one or two signs of ovulation, you may be able to use these indicators to help estimate when you're most likely to ovulate.

If you can narrow down when you may be ovulating, you can time your baby-making more accurately and may get pregnant faster.

Even if you're not looking to conceive, being aware of your ovulation signs will help you understand your menstrual cycle better.

Here are some signs to watch for that can help you figure out when you're most fertile:

You have breast or nipple tenderness, sensitivity or soreness. Because you have a rush of hormones entering your body right before and after ovulation, you may experience these signs of ovulation.

You find more luteinizing hormone (LH) in an ovulation test. Ovulation tests are over-the-counter predictor kits that can track your ovulation. They measure your levels of LH, a hormone made by your pituitary gland, in your urine. You're always making LH, but you make more 24 to 48 hours before you ovulate. Your LH surge triggers ovulation.

You have an increased sense of smell, taste or sight. For some women, heightened senses can be a sign of ovulation. For example, you may have a more sensitive sense of smell in the latter half of your cycle.

You find consistent changes in your basal body temperature (BBT) chart. BBT is your temperature when you're fully at rest. Your normal, nonovulating temperature is 96 to 99 degrees Fahrenheit. Because your BBT changes throughout your cycle, it may be a half-degree higher during ovulation. If you track your BBT over a few months, the chart can help you figure out when you'll ovulate and be most likely to get pregnant.

You notice a change in your cervical position and firmness. The cervix undergoes many changes when you ovulate to prepare for the incoming sperm and give the egg the best chance to be fertilized. When you're ovulating, the cervix will be softer, more open and higher to let the sperm through on their way to the egg. It can take some time for you to distinguish what your cervix feels like normally and how it changes when you're ovulating.

You notice a change in cervical mucus. Throughout your cycle, your cervical mucus changes in quantity and quality. Ovulation usually happens on the day you have the most fluid. If your cervical mucus or fluid looks like stretchy, clear egg whites (though not every woman's mucus looks the same), you're near ovulation or are ovulating. That's because estrogen stimulates cervical mucus production. Because your estrogen levels rise as you're about to ovulate, your cervix secretes more mucus.

You have light spotting or discharge. It's normal and common to have spotting or brown discharge during ovulation. This symptom happens when the follicle near the developing egg matures, grows and then ruptures, causing a bit of bleeding. The blood turns from red to dark brown as it gets older.

You check your calendar. An ovulation or fertility calculator or calendar can help you figure out the best time to get pregnant. It will help you learn the length of your cycle and the days and months that you're most fertile. When using a calendar, write down the first day of your period or menstrual cycle for several months. You'll start to see patterns that can help you figure out when to have sex. Many apps are available online to make the process easier.

How to Use a Fertility Calculator