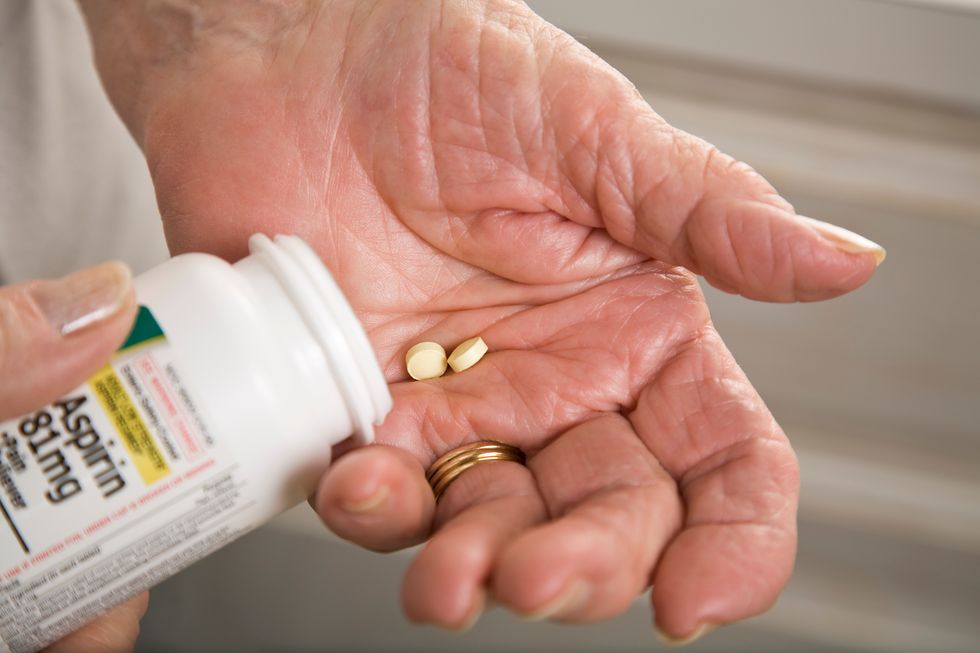 The Rise and Fall of Baby Aspirin

Low-dose baby aspirin was once recommended to reduce risk of heart disease and stroke. Recent research shows the increased risk for internal bleeding and stomach ulcers outweighs the benefit for many people.

The Amazing Story of Aspirin

Aspirin has a long history of fame dating back to its discovery from willow bark in the days of the ancient Egyptians. Hippocrates, the Greek physician, later considered it a miracle drug to treat pain from inflammation and fever. People didn't need research studies or clinical trials to tell them that it worked. It worked to relieve pain and fever pretty much for anyone who took it.

Fast forward to the 1700s when the active ingredient, salicylic acid, was identified. A useful synthetic form called acetylsalicylic acid (ASA) was developed by a chemist at Bayer laboratory in Germany. Physicians mixed the white powder to give to their patients.

They used the apothecary scale to measure the "right" amount of aspirin powder. Aspirin was first available over the counter to the public in the form of a pill during World War I. Today we have Bayer aspirin and many generic versions in low and regular strength (81 mg and 325 mg tablets are most common in the U.S.).

Too Many Medications? Weighing the Risks

If you are taking aspirin, make sure your health care professional knows. Check your list of medications from your medical record to see if the daily aspirin you take is listed. Because it is an over-the-counter medication rather than a prescription medication, your physician may not know you are taking it and therefore the medical record won't include it.

If you are taking aspirin, your health care professional may note it with the widely used abbreviation for aspirin, ASA.

Without clinical trials in the past, no one knew how much aspirin to take. Large doses of aspirin often led to nausea, vomiting and sometimes coma.

So, using aspirin was a double-edged sword. Small amounts worked well; much larger amounts not so well. And so it is with many medications we take.

I couldn't find the date for when aspirin was first observed to cause bruising and bleeding, common effects from aspirin even after small doses. I bet it was discovered in the elderly. Dark purple bruises can appear even without trauma on the thinner skin of older people taking aspirin.

A Nobel Prize was awarded in 1982 to the scientists who discovered that aspirin blocked  the hormones called prostaglandins. Prostaglandins cause the blood to clot and promote inflammation. Aspirin works by blocking prostaglandins from doing their job.

The use of aspirin to treat heart attacks and strokes is not in question.

Daily aspirin (both low dose and higher dose) has been shown to reduce the risk of death or another heart attack and stroke in people who have heart and vascular disease. Taking a medication such as aspirin to prevent another occurrence of a disease such as heart attack is referred to as secondary prevention.

Aspirin works by interfering with the platelets, the tiny cell-like substances in our blood that contribute naturally to our blood clotting after an injury. If the platelets are interfered with by aspirin and can't clump together, the blood won't clot.

In the 1990s studies showed that regular aspirin use reduced the risk for colon cancer too. A more recent review of newer studies of older adults questioned that finding.

No other medication has so cheaply and effectively found a place in modern day medicine for so many people. But who can benefit and safely take it is now in question.

Aspirin can irritate the lining of the stomach after just a few doses. It can lead to ulcers and massive bleeding, especially in the elderly.

A gastrointestinal (GI) doctor told me about his research as a young doctor studying aspirin and the stomach lining. He looked at the stomach lining of healthy people taking small amounts of daily aspirin. He found that only a few doses can cause irritation and the beginning of an ulcer.

Anyone with a history of ulcers, beware.

Everyone is at risk to suffer the bad consequences of aspirin, but not everyone will benefit from taking it.

The older you are, the greater the risk. If you take enough aspirin, you will have problems. Aspirin increases bleeding pretty much everywhere in the body although the risk is greatest for GI and brain bleeding.

By 2014 the Food and Drug Administration released an update to consumers about aspirin. They advised that daily aspirin as a preventive medication in people who have not had a heart attack, stroke or vascular disease problems may not be worth the risk or dangers. The FDA refused to allow Bayer to label baby aspirin as a way to prevent a first-ever heart attack or stroke. That means they didn't agree that aspirin was useful as primary prevention.

In 2016 it was estimated that about 40 percent of U.S. adults over age 50 take a low dose of aspirin hoping to prevent heart disease and/or stroke. Both the American Heart Association and the American Stroke Association support the use of daily low-dose aspirin in people who are at high risk for having a stroke or heart attack. The American Diabetes Association also recommends daily aspirin for certain diabetic patients with an increased risk of heart and vascular disease. They may change their guidelines based on the following new study findings.

ASPREE (Aspirin in Reducing Events in the Elderly): In this study of over 19,000 healthy people ages 65 and older, the people were not previously taking aspirin and had no history of heart disease, diabetes or stroke.

After almost five years, there was no benefit from aspirin, but there was a major risk of hemorrhage in the brain and GI tract. To most people's surprise, there was a slight increase in colon cancer risk from aspirin. There was also a higher risk of death from any cause in people who took aspirin.

ARRIVE (Aspirin to Reduce Risk of Initial Vascular Events): In this study, 12,500 men and women without diabetes but with at least two other risk factors for heart and vascular disease were treated with low-dose aspirin for five years. Men were enrolled at age 55 and older. Women were enrolled at age 60 and older. Again, to the surprise of most, the use of aspirin was not beneficial and yet the risk of serious bleeding and other problems was small but much greater for the people taking a baby aspirin daily.

ASCEND (A Study of Cardiovascular Events in Diabetes): This study looked at 15,500 patients ages 40 and older with diabetes but no known heart disease who were treated with low-dose aspirin for over seven years. There was a 12 percent reduction in major heart and vascular events such as heart attack and stroke but this was offset by a 29 percent increase in bleeding, mainly from the GI tract. (Said another way, there was an absolute risk decrease of heart events by 1.1 percent and an absolute increased risk of major bleeding of 0.9 percent.) There was no decrease in cancer risk in the aspirin group.

Note: Most of the patients had reasonably good control or treatment of their blood pressure and blood fats at the start of the trial which means they were already doing a lot to reduce their heart risk.

ACCEPT-D (Aspirin and Simvastatin Combination for Cardiovascular Events Prevention Trial in Diabetes): This study involved 5,000 healthy patients ages 50 and over with diabetes being treated with low-dose aspirin and simvastatin versus simvastatin alone. The results of this trial have not yet been reported.

Is there any wonder people are confused as to the role of aspirin in preventing heart disease? Most experts today agree that for healthy people of all ages without diabetes or heart disease, the risks of taking aspirin are likely greater than the benefits.

On the other hand, if you have diabetes or multiple other risk factors such as smoking, high blood pressure, high cholesterol or a family history of heart disease at a young age, a careful look at your individual circumstances and a conversation with your health care professional make sense.

My brother-in-law is 70 years old and has type 2 diabetes. He has a great diet, exercises daily and has a good family history. He controls his blood pressure and blood cholesterol with medications. He was advised to take daily baby aspirin "just in case" many years ago. I have asked him to talk to his doctor in light of current research to see if it still makes sense for him.

In May of 2019, JAMA Neurology (Journal of American Medical Association/Neurology) released a comprehensive review of 13 randomized clinical trials of healthy people taking low dose aspirin. They concluded that the use of low-dose aspirin in people without heart or vascular disease significantly increased the risk of bleeding within the brain, referred to as intracranial bleeding.

Bleeding in the brain is considered a major bleeding event. It is linked to higher chances of being impaired (symptoms similar to findings after a stroke) and leads to a higher risk of death.

Those patients of Asian race and those with a lower body mass index (lower BMI) were especially at higher risk of a brain bleed.

Medicine is full of tradeoffs. What makes sense for one person may be troubling to another.

For everyone, it makes sense to regularly ask your health care professional about any medicines you have taken for a long time (called legacy medications). Does the recent research change anything for you or a loved one? Is aspirin worth it now that you may be older and have a greater chance of bleeding from the baby aspirin than ever before?

Marie Savard, MD, is a trusted voice on women's health, wellness and patient empowerment. She currently writes a blog called Ask Dr. Marie, where this column first appeared. Her blog focuses on  the challenges of medication overload in older adults and what caregivers can do to help. Dr. Savard is a former ABC News Medical Contributor and author of four books including her most recent, Ask Dr Marie: What Women Must Know about Hormones, Libido, and the Medical Problems No One Talks About. She lives in Philadelphia with her physician husband and has three grown sons.