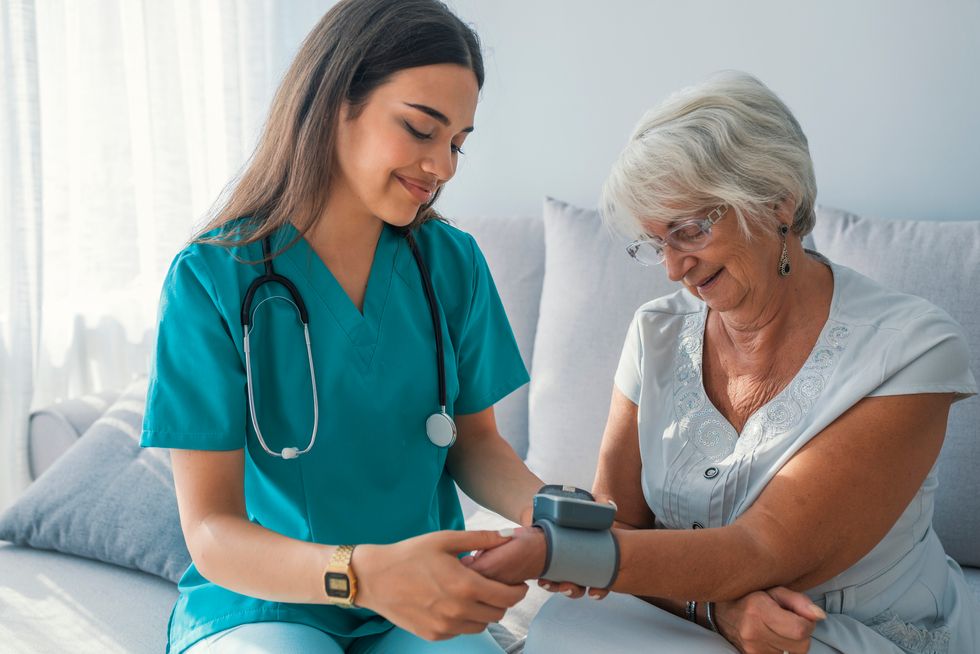 For women's health, there are many aspects of current Medicare coverage that are problematic. While Medicare-for-all could offer the same insurance and benefits to everyone with guaranteed access, it would also have some significant challenges.

Health care reform has been a policy and political issue for many years. Recent Medicare-for-all proposals have grabbed headlines and are now being used to define political candidates. However, the current Medicare program has some characteristics that can make affordability and access problematic, which raises some concerns about moving to a Medicare-for-all type system – particularly for women's health.

HealthyWomen advocates for changes that make health care more affordable and available for women and their families, and opposes changes that restrict access – especially when they discriminate against women because of their unique health care needs. Choosing appropriate health insurance and health care are daunting challenges for women and families in part because of the lack of clear information. For example, in our WomenTalk 2018 survey, 35 percent of the 1,001 women between the ages of 35 and 64 in the survey reported that they had problems understanding what insurance plans covered. This confusion (along with costs and other factors) are likely why women are 45 percent of the 23.6 million uninsured non-elderly adultsi in the U.S.

Goals of Health Insurance
The goals of insurance are to provide protection against debilitating costs if/when you or a family member becomes ill or otherwise needs health care, and to provide coverage for (and thus access to) necessary care – including preventive services – at costs that are reasonable for each person. Medicare seeks to do this by being funded largely through taxes and having a broad benefit package – although there are coverage and affordability limitations as discussed below.

Medicare: What It Is and How It Works

To understand how Medicare-for-all would affect women's health, it is important to consider how Medicare currently works, and some of its pros and cons.

Medicare has three parts: In general, Part A covers hospital care, Part B covers care outside of hospitals (including outpatient surgery), and Part D covers prescription drugs that people give to themselves, i.e., medicines from a pharmacy.

Medicare Advantage (Part C) are managed care plans that include all the benefits of Parts A and B of "Traditional" Medicare. Many Medicare Advantage plans also include or offer prescription drug (Part D) benefits, as well as some additional benefits such as eyeglasses and hearing aids not offered by traditional Medicare, although they may also restrict access by only paying for care from certain hospitals and clinicians.

Medicare Advantage (Part C) and Part D drug plans are run by private health plans. Options and benefits differ depending on where the person with Medicare lives. The federal government also contracts with private insurance companies to pay the individual bills under Medicare Parts A and B.

Medicare Part A is funded through a Trust Fund that receives money through a payroll tax. Parts B and D are funded through a combination of monthly premiums – people with higher incomes pay higher premiumsii – and government funds that come from general revenues. People who have paid payroll taxes into the Medicare Trust fund for 40 quarters are automatically eligible for Medicare Part A, and there are no additional premiums for Part A.

Fifty-five percent of Medicare enrollees are women. With the aging of the U.S. population, the number of people on Medicare is growing rapidly, i.e., about 10,000 per day.

For women's health, there are many aspects of Medicare as it currently exists that are problematic – particularly affordability since women historically have had lower average incomes and fewer financial resources than men.vii For example, the lack of a maximum amount a person could be required to spend per year on health care could be devastating for a young woman who has a complicated pregnancy. There are also concerns about access to appropriate treatment options because women are more likely to have certain chronic conditions – including MS, lupus, thyroid disorders, rheumatoid arthritis, psoriasis, and urinary incontinence. Similarly, Medicare's current lack of parity requirement for inpatient mental health services can limit care for people with mental health or substance abuse problems. Those are some concerns HealthyWomen has about the current Medicare program, which could lead to significant complications and anxieties if all Americans were covered under a new Medicare-for-all program.

Other types of insurance have different structures, and pros and cons. For example, the Affordable Care Act (ACA) – also known as ObamaCare – provides a framework for people who buy their own insurance that includes required benefits, annual cost limits,viii and financial help for lower income people. But as the ACA rules and markets in states have evolved, there is growing divergence among states in affordability and choices. In some states there are also non-ACA compliant plans that may have lower premiums but fewer benefits – particularly some that are important for women's health. (HealthyWomen has written about those "skinny" plans.) Other people get health insurance through their job,ix low-income people may get insurance through state Medicaid programs, veterans get health care through the VA, and about 30 million people in the U.S. do not have any health insurance.

Medicare-for-all could mean everyone would have the same insurance and benefits, and guaranteed access to that insurance. Medicare-for-all could simplify things for many patients, doctors and hospitals, and while Medicare has no annual spending limit for enrollees, it generally has lower deductible and co-payment amounts compared to some ACA plans. However, it would also have some significant challenges because of Medicare's limits on benefits and financing; and transitioning people, clinicians, hospitals, and insurance companies from today's situation to whatever the new program would be. And if Medicare (or Medicare-for-all) faces greater financial problems and pressures in the future, and Federal deficits continue to grow, the government could seek to restrict access to care, limit benefits, or increase premiums or cost-sharing. (Others have written about the estimated higher taxes and government spending that different Medicare-for-all proposals would likely require, so we won't explore those projections and concerns here.)

Recognizing that a new Medicare-for-All program would require new Federal law, it is also worthwhile to explore politics and the history of health reform initiatives, since policy proposals can either lead to new laws, changes to existing laws or regulations, or sometimes changes in the actions of individuals or organizations.

Politics has been described as the art of the possible,x and as a choice between the disastrous and unpleasant.xi In either case, unless the politics lead to policy changes, the effect on people's lives is likely to be minimal. For example, ClintonCare in the early 1990s led to no significant changes to law because it lacked party unity or consensus. In contrast, RomneyCare in Massachusetts in the early 2000s was successful because it had both bipartisan and external stakeholder consensus and alignment. And ObamaCare had united support within the Democratic party (which controlled both parts of Congress and the White House), but continues to produce bitter partisan feuding.xii

HealthyWomen's goal is to provide women information so they can understand how proposals for changing health care or health insurance would benefit women and their families (or not). HealthyWomen has supported or opposed specific proposals to change Medicare as it currently exists because it does have significant implications for women and their extended families.

Overall, Medicare-for-all is a great political phrase/concept, but could have significant policy, political and implementation hurdles, including: tens of millions of people changing insurance coverage, doctors and hospitals adjusting to new reimbursement systems, and presumably shifting insurance premiums people and companies currently pay into some form of tax or other type of payment to the government. In addition, Medicare-for-all could be characterized (and possibly criticized) as an expansion of government, while interestingly, the Veterans Health Administration is moving in the opposite direction by outsourcing care to private doctors and hospitals. While HealthyWomen encourages thoughtful discourse about how to address all those changes – with the fundamental goal of affordable access to quality insurance and care – working to improve the existing Medicare program would be constructive too.

Thus, as one person recently noted, Medicare-for-all sounds good, but you need to be careful what you wish for because there are so many unknowns.

So, the question remains, what are the best ways to increase affordability and access for women's health care services, and how does Medicare-for-all fit into that set of solutions? And further, for the existing health insurance options – including the different parts of Medicare and the many different ACA plans across the states – how do they provide assurance of future affordability should someone become ill? That is, are those with greater illnesses paying more to keep everyone's monthly premiums lower, or does everyone pay higher premiums so that total costs are less for people with more health problems?xiii

HealthyWomen is working to help women and policy makers understand those and other questions, and to develop practical and responsible solutions. If you want to weigh in on this topic with us here at HealthyWomen, you can email us at policy@healthywomen.org.

ii Higher income people have paid more in payroll taxes for Part A, and compared to the ACA, Medicare Parts B and D have more graduated, step-wise increases in premiums for higher income people since under the ACA, premium subsidies end at 400% of the poverty level.

iii People are eligible to enroll in Medicare when they are turning 65 years old or after they become disabled. If the person has paid into the Medicare Trust Fund through payroll taxes for at least 40 quarters they pay nothing for Part A, otherwise they would have to pay a monthly premium. Eligibility for Medicare for people with disabilities is based on Social Security disability status as well as for specific diseases: ALS, AIDS, and End-Stage Renal Disease.

iv There are pending regulatory proposals that would allow Part D plans to limit coverage of medicines in the six protected classes.

vi This is somewhat similar to how younger people subsidize monthly premiums for older people in ACA plans because of the 3:1 age band restriction, i.e., within any particular ACA plan option, premiums for a 64-year old person cannot be more than 300% of the premium for a 26-year old person, and there are no premium differences allowed based upon gender.

ix It is estimated that 160-180 million people get such employer-based health insurance.

xii The day the ACA was signed, a long-time Republican health policy expert gleefully told me that "they were going to repeal" the law, with the implication that it would be a big political win for the Republican party. While the repeal never happened, it was a big political cudgel, with the House of Representative voting more than 60 times to repeal (or significantly alter) the ACA.

xiii Of course, the structure of health insurance benefits may or may not significantly address the underlying costs of care, which fundamentally contribute to affordability for women and their families. That is a topic for another post, or series of posts.