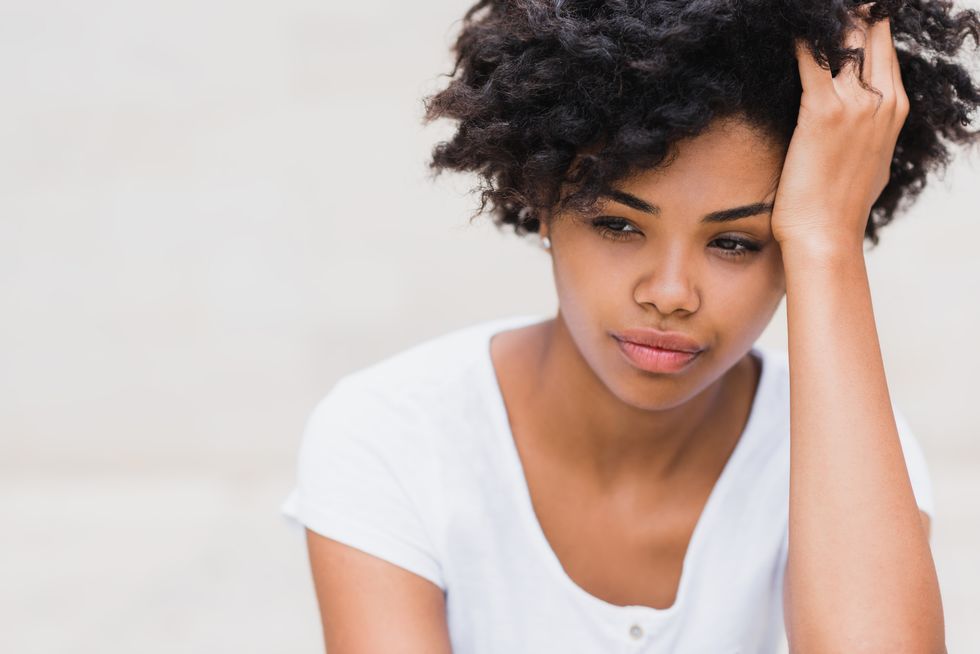 It's Not Normal: Black Women, Stop Suffering From Fibroids

Women may not recognize that they have a problem for months or years, resulting in a delay in treatment, and physical, economic, and emotional costs.

Uterine fibroids are a common gynecologic condition among women and the primary reason for hysterectomy for US women. Over their lifetime, about 80 percent of black women and 70 percent of white women will develop fibroids. Fibroids, also called leiomyomata or myomas, are noncancerous tumors that develop within the muscle tissue of the uterus (also called the womb). Some never cause any symptoms or problems, and many women will never know they have them. But fibroids can lead to difficult health consequences for women. Fibroids are usually a problem for women during their reproductive years, and then shrink or diminish after the menopause. Since most women will have fibroids, and the fibroids may result in few or no symptoms, the line between normal and abnormal can be blurry. Women may not recognize that they have a problem for months or years, resulting in a delay in treatment, and physical, economic, and emotional costs. For an overview and more details about fibroids, two excellent resources are available on the CARE About Fibroids and HealthyWomen websites.

Relative to white women, black women are 2-3 times more likely to have fibroids, to develop them at younger ages, to have bigger fibroids, to have more fibroids, and to have more symptoms. The rate of hospitalization for fibroids is three times higher for black women than white women. The reasons for the increased risk of fibroids in black women are not well understood, although researchers continue to search for answers. Some data suggest that low Vitamin D levels can increase the likelihood of developing fibroids; African-Americans have lower levels of Vitamin D which may contribute to their higher risk. Black women have higher rates of obesity which is also a risk factor for fibroids. Results from the large Black Women’s Health Study have found a causal relationship between experiences of racial discrimination and developing fibroids. Less well known is that childhood sexual abuse seems to raise the risk as well.

Of note, research suggests that fibroids in black women are less likely to regress after menopause.

Because most black women have fibroids at some point during their lives, the symptoms they experience might seem "normal" for them. Many girls are raised to believe painful, heavy periods are just a part of life. However, too many black women do not have an accurate idea of what normal really is. Women suffer needlessly before seeking treatment for their fibroids. The previously mentioned national survey showed that black women waited substantially longer than white women before seeking treatment - 4.5 years compared with 3.3 years.

Black women have higher rates of hospitalization for fibroids compared with white women. They are 2 to 3 times more likely to undergo hysterectomy (removal of the uterus by surgery) for fibroids and 7 times more likely to have a myomectomy (surgical removal of one or more fibroids). Blood transfusions related to fibroid surgery are substantially higher among black women.

Health care providers, particularly the gynecologists who treat most women with fibroids, play an important role in advising and guiding women as they decide on the best treatment for their fibroids. Extensive research shows that provider beliefs and biases about Black women are linked to racial disparities in health and health care. Often, these biases are unconscious, but they still affect the care and recommendations provided by the physician and the trust a woman has in the recommended treatment. Physicians should be trained to recognize their own biases and learn strategies to prevent them from influencing the care they deliver.

While hysterectomy provides the most effective treatment for fibroids and eliminates any chance that they will return, it also eliminates a woman’s ability to get pregnant and comes with substantial risks for complications. Hysterectomy is not necessarily the only or the best option for many women. Today, there are several nonsurgical treatments available which work for some women, and more are being developed. Two birth control methods, oral contraceptives and intrauterine devices, can be effective at reducing heavy bleeding. Tranexamic acid is a medication that reduces heavy menstrual bleeding but does not interfere with getting pregnant. Several medications shrink the fibroids’ size. These are usually used for 3-6 months when the menopause is near, or in preparation for fibroid surgery, as they can cause hot flashes and other menopausal symptoms.

When surgery is required, newer methods, known as "minimally invasive surgery," use small surgical incisions and small surgical instruments to remove fibroids while preserving a woman’s ability to have children. Even hysterectomies can be done using a less invasive technique, call laparoscopic hysterectomy! (A laparoscope is a thin tube with a very small camera that is inserted through a small incision into the abdomen that allows the doctor to see pelvic organs.) These minimally invasive techniques reduce the risk of life-threatening complications and shorten the time needed for recovery after surgery.

Because black women are more likely to develop their fibroids at a younger age, fibroids are more likely to have an impact on their childbearing plans. Unfortunately, many women and their health care providers lack basic knowledge of the options that are now available. Educating black women about appropriate alternatives to hysterectomy is critical. Development of aids for decision-making specifically for black women will facilitate meaningful discussions about alternative treatments for fibroids. These aids should be developed with participation by black women and their health care providers. The Black Women’s Health Imperative has begun such an effort.

The choice of therapy for fibroids should be appropriate for a woman’s clinical situation and respect and consider her preferences and life circumstances, including her desire for having children in the future. A quick guide on treatment options is available on the CARE About Fibroids website.

Black women, and all women, need to know that suffering from fibroids is not normal. And learn their options for treatment. More information on therapy for fibroids can be found here.

What’s Normal When It Comes to Menstrual Bleeding?