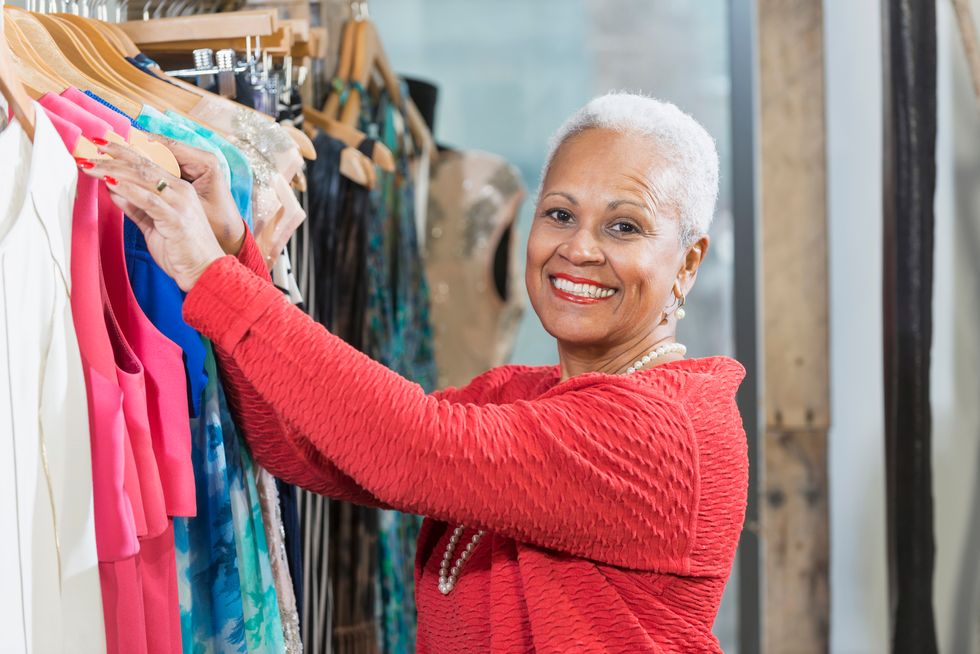 Dressing Your Age: Removing the Stigma

Dressing Your Age: Removing the Stigma

The rules of fashion have relaxed, but it's still important for women to dress in a way that celebrates who they are now—not who they once were.

I'm a 55-year-old woman, yet emotionally I feel so much younger. Which is a way of saying that I still feel like a kid and don't want to dress quite like an adult. My clothing, I feel, is an expression of who I truly am.

Yet, even though I still can rock things like miniskirts, shorts, tank tops and other "youthful" attire, I can't help hearing messages in my head that I must "dress my age."

And my (adult) kids don't make it easy for me, giving me disapproving looks when I dress in what I love. Do I really need to tone it down and dress like a grown-up?

I can relate in many ways.

I remember looking at my mother when I was a teenager, embarrassed by her short skirts and tight jeans, thinking that she should take it down a notch and dress like all the other mothers. In my mind, she should have been wearing "proper" things like trench coats, two-piece suits and a structured leather handbag rather than a rain slicker, jeans and a fringed suede shoulder bag.

She was all of 35. And in retrospect, she looked damned good.

But I'm afraid at 55, it would look even more inappropriate to be dressed like that, although since then, the "rules" of dressing have relaxed a lot. Add to that the fact that we're so much more fit and body conscious.

But. Let's pause here. Although l thought I'd never admit this, there is a point of no return, I'm afraid—when we teeter on the brink of looking just.plain.wrong. We may have fabulous legs, a toned tummy and a better-than-most butt, yet that doesn't mean we should wear a Band-Aid for a skirt or a cropped top that hovers dangerously close to revealing what's underneath.

You can still show off your legs, of course! But more age-appropriate (and flattering) is a skirt that comes right to the knee or a tad below it, rather than five inches above it. And there's nothing wrong with showing off your arms, either, or for that matter any body part you want.

The key is looking tasteful and thoughtful. After all, you want people to remember what you say, rather than what your clothes say.

Your clothing, writes Vanessa Friedman, the fashion director of the New York Times, should not be the focus of attention. If you're having trouble relating to dressing like an adult, Friedman advises you to "Think of your clothes as costume. Figure out your own chosen role and dress for the part." In other words, choose clothing that makes you feel like an adult, then "play act" at it until wearing them feels natural.

I was speaking to an old friend of mine yesterday (not old as in years, but old as in us going way back to when our children were infants), and we were discussing just this. My friend was a self-described hippie child of the '60s who dressed in overalls, tattered flannel shirts and work boots—all the way up to her mid-50s. That's when she suddenly had a revelation while watching an episode of Dancing With the Stars.

"Betsy Johnson (the fashion designer, popular in the '60s} was on," my friend recalled. "She was still wearing the same type of clothing she wore 40 years ago—a tutu, a bow in her hair and striped leggings. And although she was thin and could do a split, I was horrified at the way she looked. At that moment, I thought to myself, 'I never want to grow old and embarrass myself.' That's when I started dressing differently."

She replaced her worn, inexpensive jeans with premium denim; pricier, yes, but good and tasteful rather than trendy and cheap. Nice sneakers took the place of her work boots. "I realized I could still keep the essence of who I was in the way I dressed, but could look more polished and grown up."

I think my wise friend has the right idea. And although I don't agree with—or heed—a lot of popular counsel—like older women cannot/should not have long hair, wear leggings out in public, or wear booties—I still know, intuitively, when my outfit is dangerously veering into the wrong territory.

How do I know? When I look in the mirror and I see a woman who is trying too hard to look like someone she once was, rather than celebrating the someone she has become.

How to Get a Good Night’s Sleep

What Is Body Dysmorphia (BDD)?